Financial data aggregation has become one of the fastest-growing sectors of the entire Fintech industry, and rightly so. From traditional financial institutions to emerging fintech startups, for the companies operating in the financial sector to have a clear image of customers’ financial data, they require access to their accounts, and this is where data aggregation companies factor in. The concept is fairly straightforward – customers’ personal and financial data from a variety of sources are grouped together and made readily and conveniently accessible in a single place. This information is then used by fintech companies and banks to start generating additional income, which is why the demand for such services has boomed in recent years and continues to do so today.

The importance of the Data Aggregation was evident when an established old-guard financial institution, Visa, had announced its acquisition of a Data Aggregator startup – Plaid, for a sizable sum of $5.3 billion in January 2020, indicating the increased interest in data aggregation in the global financial sector.

The following list will give an overview of Findata APIs, their niche fields, and advantages, which will help you in choosing the Data Aggregation provider best suited for you. 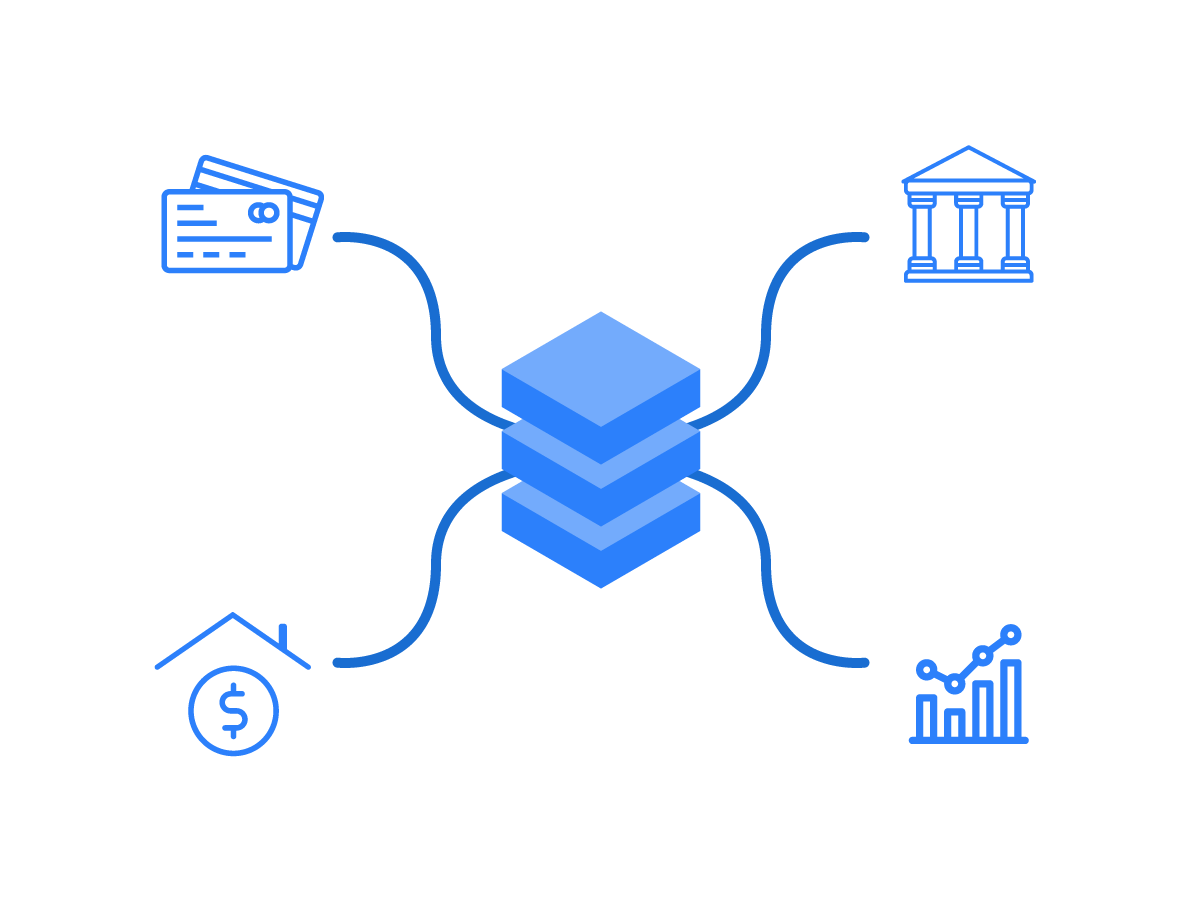 How do Data Aggregators work

So how do financial data aggregation providers achieve this? They do so by aggregating data from a wide range of financial institutions, using a number of different methods to gather relevant information

A rather primitive method used is called screen scraping, when a computer bot is created, which imitates a person, logs into users’ account with login information, alongside the customer, scans for and collects specific data that it needs, and then sends it back to the data aggregator to be analyzed and cataloged.

A more sophisticated, and preferred method of gathering data from banks is by using an application programming interface, or API for short. Banking API is a set of protocols, providing guidelines for the elements of the software to interact, establishing a direct connection between Data Aggregator and financial institution’s databases. Banks may have an internal API, to which the data aggregator connects to, receiving information on bank accounts there, or banks and data aggregators establish a partnership, granting direct access to users’ information.

Using the API method is usually the preferred one, as it provides a more direct, reliable service and offers greater security when gathering and storing data. The main advantage behind the API method is that it enables customers to share their data with third-party actors, without the need for handing out their login information. As an added benefit, services provided by the banking API providers give customers access to information on what type of data is being shared, and enables them to deny access to their data, should they decide so. It is due to this, that screen scraping is being gradually phased out, in favor of direct API access.

Using such technologies, Data Aggregators are able to provide fintech firms with access to their users’ financial data. To break it down – Fintech companies go to data aggregators and connect to their API. Once a new user signs up on their platform, and signs into his or her bank account, the fintech company receives their financial data, which are usually bank account information, credit cards or brokerage accounts.

How exactly is data aggregation used

Financial data aggregation platforms have witnessed a significant increase in the demand for their services, by a variety of fintech firms operating in different fields.

One could argue that one of the biggest benefactors of data aggregation has been personal financial managers or PFMs for short. A single glance on the services provided by PFMs is enough to see the extent to which they have benefitted by having direct access to their clients’ financial information. Since the provision of financial advice is one of the main services provided by PFMs, such as Acorns and Mint, having full and comprehensible access to the spending habits of their clients enables them to provide personalized advice to a previously unheard extent. Banks that offer PFM services, like Lloyds or HSBC in the UK, have also benefited greatly by using financial data aggregation APIs, as having access to the information on their clients’ external accounts enables them to make targeted offers, in an effort to get their clients to switch to them.

Financial data aggregation has also been making shifts in the lending field. Traditionally, it’s the applicants’ credit scores that determine the final decision of the lender. Yet, the credit ratings of many applicants are increasingly influenced by factors not directly related to their creditworthiness. This was the leading factor behind the emergence of new, alternative companies in the field of lending. What differentiates these from more traditional lenders is their greater focus on the information on applicant’s savings and cash flows, rather than just credit rating, which is provided through financial data aggregation software, that has access to applicant’s bank account information.

Data aggregation has also influenced the emergence of new fintech companies specializing in cross-border money transfers. Whereas it takes up to three days for the transferred funds to reach their destination, the direct access to customers’ account balance has enabled companies, such as TransferWise, to offer much faster transfer times, compared to more traditional methods.

How to choose a data aggregation provider

At first glance, it may seem that data aggregators operate on a rather similar spectrum, but in fact, most of them are highly specialized in terms of what services they offer, with some choosing to specialize in investment data, lending, wealth management, startups or banking. When choosing the financial data aggregation provider best suited for you, it is important to consider your specific needs and goals, and a number of attributes of the provider.

One important attribute to consider is coverage, depending on whether you need access to information from every bank in a given region, or if the necessary data is limited to a number of specific financial institutions.

Pricing should also play an important role in the final decision. So it is important to consider the budget and plan accordingly, see where the breakeven point is, and estimate the cost-effectiveness of investing in a specific data aggregation source.

Data aggregators are here to stay

Considering the benefit that data aggregation provides, one might question themselves, why won’t fintech firms do this themselves, instead of relying on data aggregators for information? Well simply because, it is far cheaper, easier and faster to rely on the established network of connections and relations that Data Aggregators have set up, instead of going through connecting to every financial institution that their customers are using individually. Either directly, or through sharing agreements, top financial data aggregators now cover over 95% of all the bank accounts in the US.

Data aggregators have influenced the fintech market to such an extent, and rooted themselves so deep, that without them it is virtually impossible to efficiently operate the fintech field anymore. Without ready access to their users’ spending habits, PFMs would have to rely on their users to provide necessary information manually, in order to keep up the quality of financial advice. Knowing the behavioral habit of an average user, that is a highly unlikely scenario. And what about the aforementioned alternative lending providers, which rely entirely on the information on savings and cash flows supplied by financial account aggregators? Their services would be non-existent, being entirely dependent on data aggregators.

Given the grand scale of the data aggregation industry, the concerns on the topic of security are on the rise. With the expansion of open banking, customers are going to have greater control over their finances and over who has access to their financial data. Despite this, the majority of banks are struggling to fully integrate themselves in open banking, still relying on a more basic method of screen scraping to gather data instead of direct API access. In 2018, Secure Open Data Access, or SODA for short, was established by a number of top financial account aggregation companies, which is a framework that lines out a set of standards for accessing data and data security, in an effort to introduce greater transparency, accountability, and traceability to the fintech industry.

Although being a relatively new technology, it is evident that whatever future holds for data aggregation, it will continue to influence the fintech field for years to come. For now, it seems that data aggregators are aiming to upscale their operations to include data analysis, alongside aggregation, in an effort to expand upon the range of services that they offer to their clientele. This is evident from a number of agreements between top banking API providers and companies offering PFM services to their customers.

Traditional financial industry giants are showing greater interest in data aggregation, in many ways seeing it as a gateway to better integrate themselves into the growing fintech field, and to have better access to the sprawling network of financial data, so as to offer a greater range of financial services to their customers. Visa’s acquisition of plaid is an indicator of this growing trend, signifying the importance that data will play in the financial sector in the coming years.

Time will tell how exactly data aggregation will evolve in the near future, but one thing is for certain, financial aggregation companies are here to stay for good.