Home - Forex Education broken down into useful sections - Forex Glossary explanations of different Forex terms - Who are the top 10 richest people in Russia?

Who are the top 10 richest people in Russia?

But as the real numbers of his wealth are a mystery, nobody can really say anything about it for sure. That’s why Vladimir Putin’s name is never mentioned in the list of Russian billionaires. It is no wonder that the largest country in the world – Russia has a lot of natural resources, such as gas, metals, and etc. This is the reason why most of the Russian Billionaires have made their fortune in these industries. The collapse of the Soviet Union was a great opportunity for many of them to accumulate the wealth they have today. But enough with the talk, let’s get straight to the business and delve into the list of wealthiest Russians and see how exactly have they made their money. 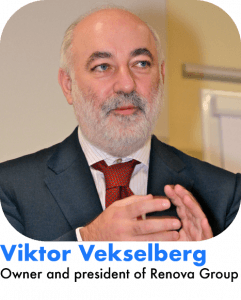 Viktor Vekselberg opens our list of 10 richest people in Russia. He is Ukrainian-born Billionaire, he is often mentioned as an aluminum baron that tells us how he had made his billions. Veselberg’s net worth is $11.5 Billion and with this number, which puts him in number 10th spot in the Russian billionaire list, and in 119th spot in the list of top 100 richest people in the world.

He was born in Lviv region in Ukraine in 1957. Graduating from the Moscow Railway Transport Engineering institute in 1979, with a bachelor’s degree in computer engineering, he later earned a doctorate in mathematics from the USSR Academy of Science’s Computer Center. For about a decade, he was working in a state lab as a research associate.

One of the richest men in Russia has made his first million by selling scrap copper from worn-out tables. In 1990 he founded Renova, and through a holding company accumulated interests in oil, gas, financial and aluminum industries. After the fall of the Soviet Union, Vekselberg, with his company, was one of the first to participate in the Russian Government privatization program. in 2007 he formed an Aluminum giant United Co. Rusal, with a merger with another Russian billionaire – Oleg Deripaska’s Russian Aluminum. They both came under U.S sanctions later on. 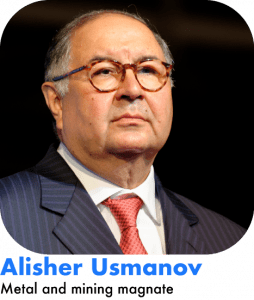 Alisher Usmanov, with the net worth of 12.5 Billion, is the 9th richest person of Russia and ranks as 109th in the list of billionaires worldwide. The main industries he has acquired his wealth from are Steel, Telecom and investments. Usmanov was born in Chust, Uzbekistan in 1953, at that time when the country was a part of the Soviet Union. Alisher has graduated from Moscow State Institute of International relations and has worked in various agencies of the Uzbekistan government.

He worked in Moscow investment firm, and after 5 years was appointed as a CEO of Gazprom holding, where he was working closely with the management team, which came to power under President Vladimir Putin. Several years later Usmanov had already built his metal and mining empire. To this day his main stake is in iron and steel company – Metalloinvest. Besides that, he owns shares in MegaFon, a telecommunications company and controls Russian newspaper Kommersant. Usmanov was an early investor in Facebook and owns stakes in JD.com and Xiaomi, He also had stakes in soccer club Arsenal, and in 2019 has sold 30% of it. 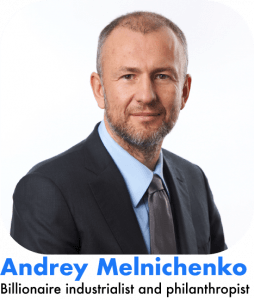 Andrey Melnichenko was born in Gomel, Belarus, in 1972. He graduated from Moscow State University, where he learned Finance and Physics. Melnichenko first started with the currency exchange booths in the early 1990s. After the Soviet Union collapsed Andrey, with two of his former classmates, created MDM Bank.

It became one of the largest Russian private banks by 2000, at that time Melnichenko had a partnership with metals and oil trader Sergei Popov. Despite the growth of his bank, he made most of his money after founding EuroChem – a fertilizer producer in Europe, the Middle East, and Africa Region. He also owns the biggest part of SUEK which is Russia’s largest supplier of terminal coal. Fertilizer and coal magnate has a net worth of $12.6 billion and is on the 8th position among the billionaires in Russia, and comes in the 90th spot globally. 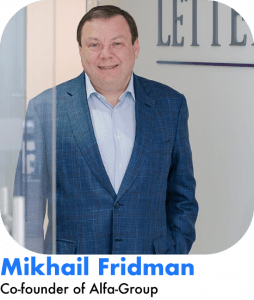 Mikhail Fridman is yet another Ukrainian native billionaire in our list of the richest men in Russia. Mikhail Fridman has a net worth of $15.1 Billion and is now the 79th wealthiest man in the world.He was also born in Lviv, Ukraine in 1964. His first tackles with the business were related to music, where he performed with a band and ran a “Strawberry Fields” nightclub while in college. The eighth richest person in Russia also had several other businesses, such as window cleaning business and selling computers.

He started his big business, which ultimately made him a billionaire, once the Soviet Union collapsed. He, with two of his partners, has established a commercial bank – Alfa Bank, which is now the 6th biggest bank in Russia, including the national banks and largest non-state banks. The company also owns interests in telecommunications and retails. Fridman has also made a big part of his fortune from the oil business. 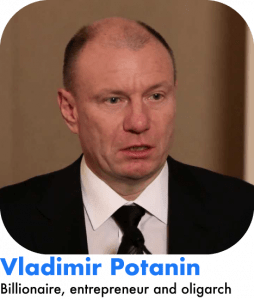 With the net worth of $18.1 billion, Vladimir Potanin is on the 58th position in the list of world’s billionaires and comes in a 6th in the list of the richest Russian people.  He was born in Moscow, Russia in 1961 and joined the Soviet Ministry of Foreign Trade after graduating from the Moscow Foreign Relations Institute. When he was 30 he met a future billionaire – Mikhail Prokhorov, together with who he formed the International Company for Finances and Investments in 1992, and later formed Onexim Bank. The bank became the largest private bank in Russia at the time. Later he was appointed as a first deputy prime minister in charge of energy and economy under the presidency of Boris Yeltsin. The oligarch has owned shares in insurance, media, agriculture, engineering, and oil. Now he has his stakes in a pharmaceutical company – Patrovax Pharm and ski resort – Rosa Khutor near Sochi, but has acquired the main portion of his wealth in the metal industry. 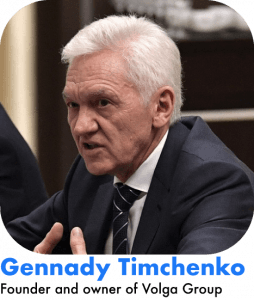 Gennady Timchenko ranks as the 5th richest person in Russia, and 49th in the world, with a net worth of $20.1 billion. He was born in Armenia in 1952 but grew up first in Ukraine and then in East Germany. He got his degree in electrical engineering at Leningrad Mechanical University and began working at Izhorsk plants, a Soviet builder of nuclear power reactors. After 8 years of working there, he joined the Soviet Ministry of Foreign Trade, was deputy head of a state exporter of oil products to the west. Later he was also working in Urals Finland, a European importer of Russian oils. At that time he got friends with Vladimir Putin and with whom he is very close till today. in 2000 he started his own oil trading company, Gunvor. Timchenko also has stakes in gas company Novatek and petrochemical producer Sibur Holding and is one of the most powerful and richest people in Russia. 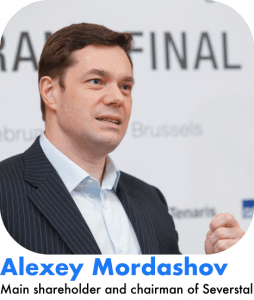 Alexy Mordashov, The fourth richest man in Russia, has a net worth of $20.5 Billion and comes in 48th in the list of the richest people globally. He was born in Cherepovets, Russia. He earned his bachelor’s degree in Saints Petersburg State University and later MBA in Newcastle Business School. He started his carrier as an economist for the steel mill in Cherepovets and once the Soviet Union collapsed, he became the company’s financial director. The steel mill was renamed to Severstal by the president of Russia at that time, Boris Yeltsin, who issued shares of the company. At that time, Alexey got his major stakes in Severstal by buying worker’s shares.  Alexey was in the position of CEO of Severstal for 19 years and has resigned in 2015, remaining as the largest shareholder of the company. He also owns 23% of stakes in TUI Group, which is one of the biggest travel and tourism companies in the world. 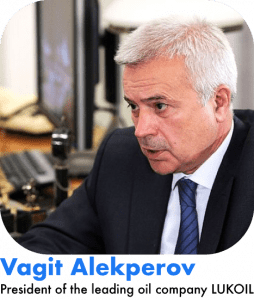 The next Billionaire on our list Vagif Alekperov, with a net worth $20.7 Billion. He is on the 47th place in the list of richest people worldwide. Alekperov was born in Baku, Azerbaijan in 1950. He graduated from Azerbaijan Oil and Chemical Institute and started working as an oil driller when he was 22. After he moved to Siberia, he took various senior positions for Bashneft and Surgutneftgaz oil companies. At the age of 40, he was named deputy and later became the first deputy minister of Russia’s oil and gas industry. After the Soviet Union collapsed he became the head of the state of a newly created oil entity which. Alekperov helped the newly renamed Lukoil to become partly privatized and started accumulating shares in it. Lukoil is now the largest independent oil company in Russia and Vagit Alekperov owns almost a quarter of shares there. 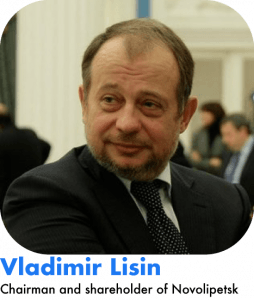 The second richest man in Russia, Vladimir Lisin, comes in with a net worth of $21.3 billion. he is also the 45th richest person in the world. The future billionaire was born in Ivanovo, Russia in 1956. He graduated from Siberian Metallurgical Institute and started working as an engineer in iron and steel plants in different places in Russia. he got the position of deputy chief engineer at the state-run Karaganda mill in North Kazakhstan. It was the fourth-largest steelmaker in the Soviet Union and the best place for Vladimir Lisin to start trading metals. Later on, he moved to Moscow and joined a group of traders – The Trans-World group, where he managed the factories. When he and his partners separated, he got the majority of stakes in Novolpetsk steel mill. Besides that, Vladimir Lisin controls Universal Cargo Logistics Holding, which owns railway operator Freight one and some other shipping companies. 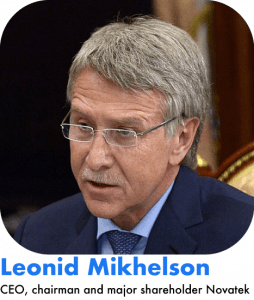 So we came to Russia’s richest man, Leonid Mikhelson. He was born in southern Russia in 1955 and Graduated from Kuybyshev Engineering and Construction Institute. He managed to accumulate wealth in the natural resource industry and now has a net worth of $24.0 billion, securing his position as the 32nd richest man in the world. After graduating he became chief engineer of Ryazantrubovodstoy and two years later he was named as the head of the trust of the company.  To achieve what he has now, Mikhelson created an investment company named Novafinvest in 1994, the company’s main purpose was to explore oil and gas. Later on, the company grew and is now known as Novatek. It is the largest non-state gas producer in Russia, coming in after the biggest supplier – Gazprom, in terms of production volume. Besides being the largest shareholder of Novatek, Russia’s richest man also has stakes in petrochemical company – Sibur.