When people think of the countries with billionaires and millionaires, they often forget to mention Mexico. In fact, the country has seen some big numbers in this field, with numbers of multi-millionaires in Mexico exceeding the global average. These people together hold 43% of Mexico’s individual wealth. For three years in a row, the richest man in the world was from Mexico before Bill Gates took the first position in 2014. Are you excited to know who are the top 10 richest people in Mexico? So are we to show you! Many millionaires have acquired their wealth in different industries, one of which is Forex trading with Mexican Forex brokers. But most of the richest Mexicans got their wealth through the Television industry and through mining natural resources, such as copper and silver. See the list of the wealthiest Mexicans by net worth below. 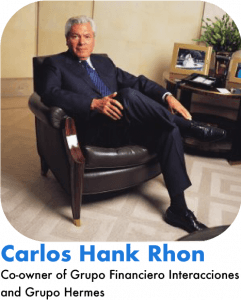 We start our list of the richest mexicans with Carlos Hank Rhon, who is the tenth wealthiest person in Mexico, with a net worth of $2.1 Billion. Carlos, who is now 71 years old, has graduated from Universidad National Autonoma de Mexico with a bachelor’s degree in engineering. His father was a famous politician – Carlos Hank Gonzalez, who was the mayor of Mexico City, Secretary of Agriculture and governor of his home state. Carlos Hank Rhon got his fortune in the banking industry. Now he owns an industrial conglomerate – Grupo Hermes, that has interests in different fields such as infrastructure, energy, tourism, and auto dealerships. Carlos also has assets in construction, financial services and many more. His wife is the daughter of another Mexican billionaire Roberto Gonzales, who is the founder of Grupo Banorte and has a net worth of $1.9 Billion. 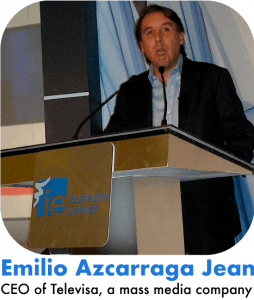 Emilio Azcarraga Jean, 50-year-old billionaire from Mexico has a net worth of $3.1 Billion.
He has earned a Bachelors degree in Industrial Relations from Iberoamericana University and later got his Masters degree at the Business Institute of Madrid, Spain. One of the richest men in mexico has accumulated his wealth in the TV broadcasting industry.

The interest in television broadcasting was natural for him as the largest television company in Mexico – Televisa was founded by his father, Emilio Acarraga Vidaurrieta.  Emilio took over the leadership in the company once his father died in 1997.  Emilio Azcarraga was holding the position of CEO of Televisa for almost twenty years and has stepped down from it in 2018. 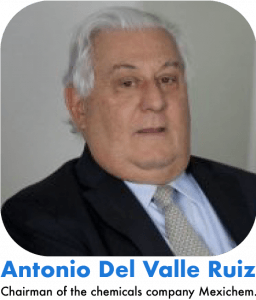 On the eights place in the list of Mexicans by net worth, we have Antonio Del Valle Ruiz, an 80-year-old Mexican businessman. He is a self-made billionaire whose net worth is $3.7 Billion. he is a founder and president of several companies in different fields, which include Grupo Emresazial Kaluz, Bancrecer, and Grupo Financiero Bital. He has also served as a Chief Executive Officer of several Mexican banks for 37 years.
Antonio has made his billions by swapping a stake in a Mexican bank to acquire control of the company, which is now chemical conglomerate Mexichem, securing his position among the ranks of Mexican billionaires.  He and his five children own a 42 percent stake of the company. For now, Antonio has passed the leading positions to his children but is still involved in making strategic decisions for his companies. 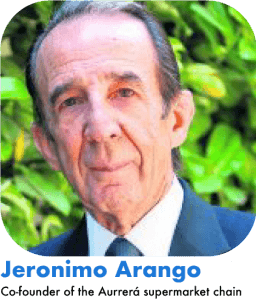 Jeronimo Arango was born in 1925 and started his journey to the rich man’s life when he was 33. At that time he was visiting New York and got his business idea when he observed people standing in long lines in the stores just to get the discount. At that point, he decided to open the stores in Mexico and started the business with two of his brothers.  They together established the supermarket chain – Aurrera, which was a big success and got him and his brothers among the rich people in Mexico. Eventually the family-owned company CIFRA got the largest supermarket chain of Mexico with Aurrera and Superama stores. The family also owned fashion stores named Suburbia and restaurants VIPs and El Porton. Later on, Jeronimo Arango has soled retail chain to Walmart in 1997. Now Jeronimo is the seventh richest man in Mexico with a net worth of $4.3 Billion. 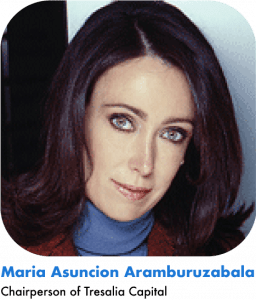 Maria Asuncion is the first woman in the list of the wealthiest people in Mexico with the net worth of $5.6 Billion. She is one of the famous businesswomen in Mexico.  Maria was born in Mexico in 1963 and got her bachelor’s degree in arts and sciences. She, with her mother and sister, inherited a stake in beer giant – Grupo Modelo by her father.  in 2013 the company was sold to AB InBev for $20 billion. Since then, up to this day Maria Asuncion serves on the board of the company Anheuser-Busch InBev. Since 1996 she has also served as CEO of Tresalia Capital – an investment firm. Aramburuzabala has led the company to make investments in construction, telecommunications, and the internet. Maria Asuncion is currently the second richest woman in Mexico. 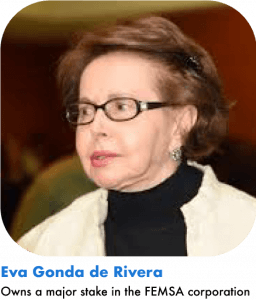 The honor of the wealthiest woman of Mexico goes to Eva Gonda de Rivera. Like Maria, she has also earned her bachelor’s degree in arts and sciences. Eva, who’s net worth is $6.7 Billion, inherited her wealth from her husband – Eugenio Gara LAguera.  Eugenio was a former chairman of bottling, logistics and retail conglomerate Femsa and got most of his fortune from the beverage industry, being one of the most prominent Mexican millionaires. He passed away in 2008 and left large stakes of Femsa to his wife and four daughters. The company is now managed by Eva Gonda de Rivera’s son-in-law and she herself does not have any operational role in Femsa. 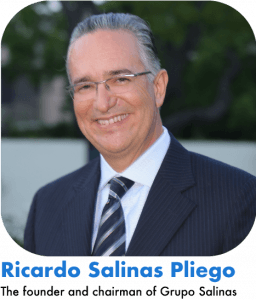 Ricardo Salinas Pliego is another Mexican businessman and one of the wealthiest man in Mexico, who got his money through telecommunications.  Ricardo was born in Mexico City in 1955, he has also acquired a bachelor’s degree in art and sciences and later did the masters in Business Administrations. His net worth is $8.0 Billion, he has several businesses that include the second-largest Mexican TV broadcaster – TV Azteca, and Retailer Grupo Elektra, which was founded by his grandfather.  He also owns Banco Azteca. Ricardo has an interesting working strategy with the last two as Elektra stores target lower-middle-class consumers who borrow money from Banco Azteca to buy items at Elektra stores. 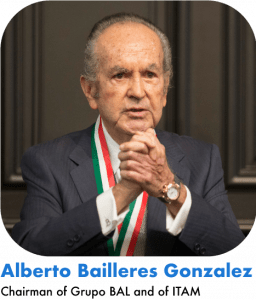 Alberto Bailleres Gonzalez, with the net worth of $10.4 Billion, is the third richest man in Mexico. Alberto, who is an 87-years-old now, has graduated from Instituto Tecnologico Autonoma de Mexico as with a bachelor’s degree in economics. He got familiar with the business from an early age, as his father – Raul Bailleres began building the family empire. Alberto was 28 years old when he took over the leading position of Grupo BAL after his father passed away. He got most of his fortune in mining, as he chairs Mexico’s second-largest mining company – Industrias Penoles, which is also the world’s largest silver miner.
Alberto Gonzalez also controls Insurance company – Grupo Nacional Provincial,  pension fund manager – Grupo Profuturo, department store chain – Palacio de Hierro and also is an owner of several other businesses in the field of financial services and agriculture, giving him a firm position among billionaires in Mexico. 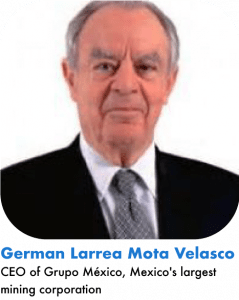 German Larrea Mota Velasco is another wealthy Mexican with interests in mining. His net worth is $13.9 Billion, making him the second richest person in Mexico. German Larrea has been the chairman, president, and CEO of Grupo Mexico since 1994 and owns the majority of the company now. Grupo Mexico is the largest copper mining company in Mexico, which also operates in Peru and the USA. German Larrea has expanded the company interests in other fields as well such as infrastructure and transportation, securing his position as second among Mexico billionaires. 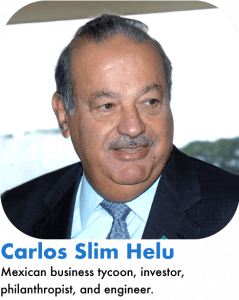 Now it is time to reveal who is the richest man in Mexico, and with this title, we are not talking about the person who has a net worth of $10.0 or even $20.0 billion, but instead $65.5 billion! For a long time, Carlos Slim Helu was among the three wealthiest men in the entire world, consequently being the richest Mexican in the world, and held the title of the richest person in the world for three years in a row, from 2010 to 2013. Today, Carlos Slim Helu is on the seventh position in the list of world’s richest people. How do you think the richest Mexican has made his money? with Telecom!

Carlos, like four other billionaires on our list of richest Mexican people, got his bachelor’s degree in Arts and Sciences. Before going into business, he was teaching algebra at the university in Mexico City. He had an interest in the business field from an early age, as his father was teaching him much about finances, management, and accounting. Mexico’s richest man also owns America Movil, Latin America’s biggest mobile telecom firm. With his partners, Carlos has bought a stake of Mexico’s only phone company that is part of America Movil.  Slim also owns stakes in consumer goods, mining and real estate companies, Mexican construction and 17% of the New York Times.