What is currency correlation

You might have noticed, after a long time of looking at the Forex markets, that some currencies move together or at the same time it a way that seems to have a pattern to it. Despite this, you have not been able to understand how these movements work and why the two currencies might be moving in some kind of a pattern together. Well, the reason for that is pretty interesting. You see, just like with everything else in the world, certain currencies are more closely connected to each other than others. In your beginner trader’s journey, you have accidentally stumbled upon the most basic currency correlation definition, and in your confusion have decided to learn more about the concept. You have made the right decision in coming here.

Currency correlation is not something that would be considered a basic Forex concept, yet being aware of the basics of how it works and what it is might assist you in becoming a better trader. This is why we are not going to go into too much detail about the intricacies of how it works, but we are definitely going to do our best to give you a strong foundation upon which to build your understanding of the concept in the further pursuit of your trading goals. 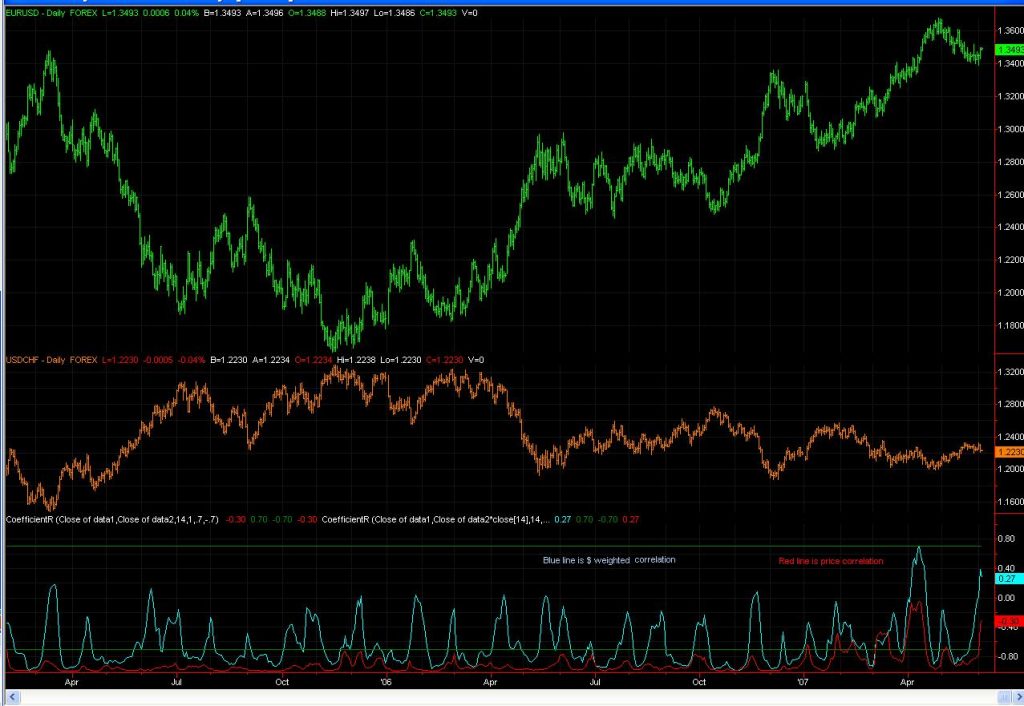 To be able to understand what Forex currency correlation is, you first need to establish an understanding of the concept of correlation. It is an important concept, one that has seen a lot of use in the world of financial analysis and trading. It is, at its most basic, a tool to determine how certain financial assets are related to each other. The concept is used all over the financial markets: stocks, bonds, CFDs, Forex, Cryptocurrency exchanges and more. Which is why you should acquaint yourself with it as well: it will be a useful tool for you going forward.

Correlation, at its simplest, measures how and to what degree two things might be related to each other. The relation is measured in a range of -1 to +1 (the correlation can be 1, 0.01, 0, or anything else within this range). The closer the number is to zero, the less correlated two items are. If the correlation is close the -1, that is referred to as a negative correlation and means that, even though the two assets are related, their movements are always the opposite of each other. So for example, if a value of an asset goes up, the value of an asset with a -1 correlation to it will go down. The opposite is true for a +1 correlation. This signifies that the two assets are highly correlated and if the value of one will go up, the value of the second will go up as well. A 0 value in terms of correlation means that there is basically no relationship between two assets and anything that happens with one does not have any effect at all on the other.

Correlation is a statistical analysis tool and would be especially well known to those who have any knowledge of statistics. It provides researchers and analytical departments of companies with the tools necessary to identify the correlation between two items through a large data sample. But to use it effectively, one must know the intricacies of the concept and know the biases and errors that might come with it. We will discuss calculating correlation a little later in the guide. For now, we shall simply stick to talking about how closely correlated currencies work, what they are and how you can use their correlation to your advantage.

How currencies are related to each other

So, now that we are aware of the general concept of correlation, we need to identify the reasons as to why certain currencies might be correlated, what this means, how it is calculated and what you can use it for.

The question that might be bothering you right now is what correlation between currencies is and what it implies for your trading. Do not fret, because we know this is a sore subject that you might just be finding out about. There is nothing to worry about in terms of currency correlation affecting your trading negatively. On the contrary, it might have a very positive effect on your future.

There are numerous reasons for why two currencies might end up being correlated. Some of them are related directly to the market, while others are the result of the effects that diplomatic and economic relations that two countries might have with each other. Usually, the economic relationship is the most important determinant. Here is a quick list to understand some of the reasons why two currencies are related:

There is a way for the average trader to be able to calculate the correlation of two currencies. The process is a little complicated, and involves some understanding of statistics, but here is a quick rundown of how it could be done:

All you have to do is use a program that allows you to process data quickly, such as Microsoft Excel. Download the historical data for the prices of the two currencies you are trying to figure the correlation out for. Make two columns and enter the data for each individual currency in each individual column. Type in the correlation equation into a blank cell at the bottom of one of the columns. Highlight the selected data and type in a coma and do this all again for the second column. Close the equation or the formula that you are using for your correlation. Congratulations you have produced your first cross currency pairs correlation. But again, remember that there might be reasons why the correlation might not be actually correct. Go ahead and review the detailed explanation of correlation in one of the many courses available online to understand this better.

The Microsoft Excel way is the fastest in order to figure out the correlation between the values of two currencies, but there are other ways as well. You can do the calculation manually, but the amount of data required for this is huge and it might end up being more tiring than it will be insightful. Using an easy tool to determine whether two currencies are correlated might be a good idea.

You do not have to keep going back to the currency correlation calculation on your own to determine what is going on in terms of the relationships between currencies. There are certain currency correlation indicator mt4 opportunities that will allow you to track changes over time and predict how you should be acting in relation to certain currencies. The number of indicators available for trade tracking and decision making is pretty huge, so go ahead and do some in-depth research on the subject before you start any of them though. 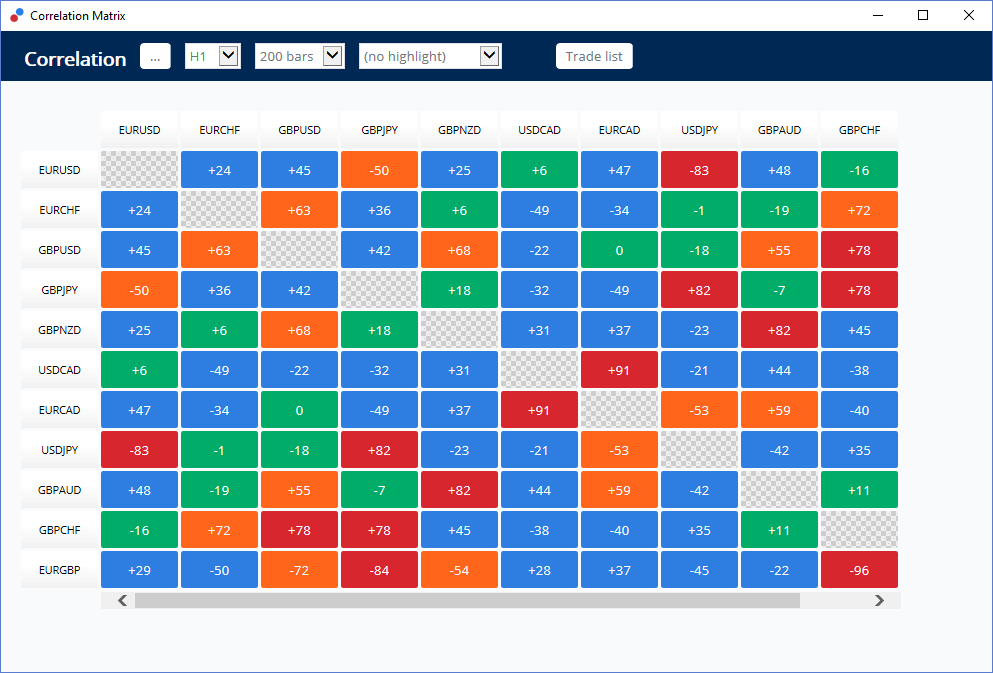 There are certain tools you can use to determine the correlation in each chart. You can choose the size of the bars (the amount of time between each) the number of bars (how many time periods you would like to measure), whether you want to have them highlighted, or whether you want to even select the currencies that are on your trade list.

It is important to look at the charts and the Currency pair correlation indicator as often as you can, but it is also important to remember that correlation changes over time. Depending on the relationships of countries, in terms of exchange rates, their trading levels, the strength of their economies, so on and so on, things may change in terms of how two currencies might be correlated. Which is why it is important to keep track of what is going on and never double down on a decision that you are not 100% sure is correct.

Currencies that are currently highly correlated

These are some of the strongest positive and negative correlations between currencies on the market today. Though this might change over time as the political processes in the world keep progressing. 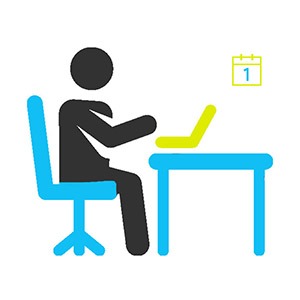 For this strategy to be successful, you will have to check the Forex currency pair correlation table as often as possible, to avoid falling into a trap where the currency pairs of your choice change in the level of their correlation and you end up using capital because of this.

Correlated currencies might have different pip sizes, which can be used to the advantage of a trader. They could hedge against the bets they make, in case the two currency pairs are negatively correlated with different pip values. So for example, one can short both pairs, and if one of them ends up losing the value of 100 pips, and the other gains the value of ten pips, while the value of the pips is $1:$10 respectively, the trader will only have ended up losing a small number of funds.

Though this strategy allows for safety during investment, it is also likely to produce very small revenue for the trader.

While the pip size strategy is important, the knowledge of correlation is also important. If two currencies are perfectly negatively correlated, this means that they will always move in the opposite directions, which means that there is the danger of canceling your position on one currency if you have a similar position on the other currency pair. So you end up with no income, as mentioned above. Which is why it is important to know exactly what you are doing when trading based on the correlation between currency pairs.

There are many ways that currency correlation can be used when trading. The many aspects of this complex concept provide opportunities to traders that they would not even be even aware of if they did not use currency correlation. This is why it is important to understand how currency correlation works and apply it well to your work. You might end up making more money than you thought you could make, just if you consider how certain currency pairs are related to each other.