Lemonade offers speed and convenience in the property and casualty insurance industry.

Lemonade is a property and casualty insurance company that uses Artificial Intelligence and modern technology to offer innovative products. The company was founded in 2015 in New York City. In the new business model introduced by Lemonade, there is no need to hire insurance brokers, as all main communications with the clients are done digitally on customers’ phones and computers via chatbots. The company had raised over $120 million by the end of 2017. One of the benefits offered by the company is the speed at which the process is executed. Getting insured takes about 1.5 minutes and getting paid for a filed claim only twice that much. Furthermore, the company has completely transformed the fee structure commonly encountered in the insurance industry. Lemonade takes 20% flat fee from the users’ premium. The rest of the money is treated like the customers’ funds. They are used to cover claims. The leftover money is donated to various charitable causes.

Lemonade sets a record for the fastest paid claim

Filing a claim happens via the Lemonade application. Two years ago, the company set a record when its AI reviewed, approved and paid a claim in under 3 seconds. In fact, according to the company, 25% of all claims take under 3 seconds to be reviewed. This is achieved through machine learning technology and the use of behavioral economics. When a customer submits a claim using the app, the AI runs 18 algorithms to detect fraudulent claims. If the claim is approved immediately, the insuree is paid in 3 seconds. In other cases, a team of employees takes over to establish the genuineness of the claim. The company provides statistics on claims filed on its platform. According to the statistics, about 52% of claims are filed for theft or vandalism, 26% for water damage, 8% for fire and 3% for crime. To get a quote on the services of the company, one simply has to go through a quick round of question from Maya, the chatbot. 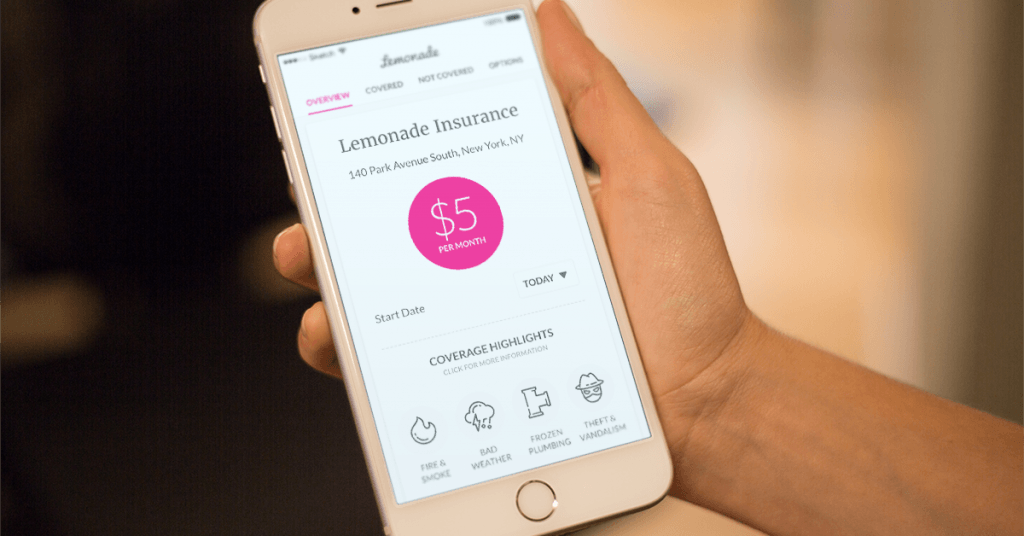 Lemonade operates a socially responsible business model as part of the fees are donated to charities. “Here’s our mission: transform insurance from a necessary evil into a social good. We’ve designed Lemonade to bring out the best in people, while giving society a push for the better,” – states the company’s website. When registering on the platform, a user indicates a nonprofit of their choice. Every year, the company donates the unclaimed money from the user’s premium to the chosen nonprofit. In 2017, Lemonade donated more than $53,000 to charities like Robin Hood, American Red Cross and Women in Need. In 2018, this number has already exceeded $160,000.