The ADP Non-Farm Payrolls Figure is a component of the ADP National Employment Report that seeks to gauge the employment levels of approximately 500,000 American businesses. The figure is used widely in economic circles as a gauge of the health of the economy.

What are ADP Non-Farm Payrolls?

Created by ADP and managed by Macroeconomic Advisers, LLC, the non-farm payrolls figure is released every month on a Friday and charts the total number of jobs in the private sector, minus farm-related jobs, in the U.S. economy over the past 30 days. This report also excludes military jobs. This report is widely viewed as one of the most important economic datasets used today by market analysts and economists, and usually significantly impacts forex trading – as it is viewed as a key indicator of economic health.

Simply put, the report assesses roughly 500,000 businesses in the U.S. and sums the total number of jobs – not employees – on the collective payroll for the businesses being surveyed. This figure is then used as a part of a total National Employment Report as a gauge of employment in the country. Since high unemployment levels and changes in unemployment negatively impact future prospects for the economy, the non-farm payroll figure and employment report as a whole has considerable weight.

Farm-related jobs are excluded because they tend to be seasonal and experience more flux than non-agricultural jobs in general. Therefore, having farm-related jobs excluded means the private sector estimate is more indicative of employment trends. The report is used to assess not only employment in general, but also employment by sector. Analysts can view which sectors are picking up jobs – largely viewed as positive – and which ones are shedding jobs. 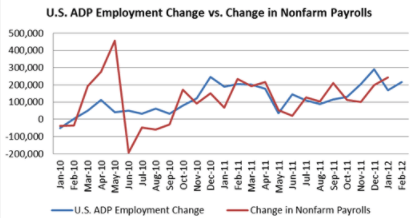 Forex traders pay close attention to this figure because it is a major market mover. Drastic changes either way can move the dollar positively or negatively, even if the results are predicted to some degree in advance. A string of consistently positive or negative non-farm payroll reports will impact the dollar versus other currencies. For example, a streak of reports in positive territory – indicating that more jobs are being added to the economy – is viewed as an upward force on the value of the dollar. Conversely, a series of declines will indicate that the economy is weakening due to falling demand, which often results in a drop in the value of the dollar.

Since the results of the non-farm payroll report are mostly known in advance of the actual report, the impact of the numbers is not as powerful as it would be otherwise. There are also questions as to whether or not the ADP employment report is an accurate indicator, and whether or not it is timely enough to be a viable predictor of future economic strength. Still, a majority of forex traders in the market pay close attention to not only the raw numbers presented in the non-farm payroll report, but also the sector-specific analysis.

Other currencies and their constituent nations have employment reports like the ADP Non-Farm Payrolls Figure that are equally important to forex traders.