The Bank of England Monetary Policy Committee, abbreviated MPC, is the chief monetary policy body of the Bank of England and is tasked with setting policy for the institution and for the United Kingdom as a whole. The MPC meets on a monthly basis for 2.5 days each session in order to discuss financial stability, inflation/deflation, economic growth, and interest rates. They make decisions regarding interest rate increases or decreases in addition to whether or not to use monetary policy instruments like quantitative easing to manipulate the currency supply for economic stability. As a result, the MPC is very influential when it comes to forex trading for the pound and the pound’s major trading partners (USD and euro).

Purpose of the Bank of England Monetary Policy Committee 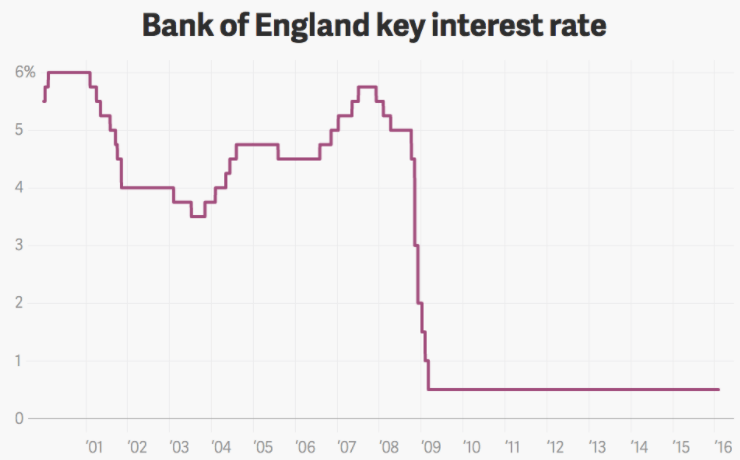 The primary tool used by the MPC is the Bank of England Base Rate, or BOEBR. The BOEBR is the rate at which the Bank of England lends funds to its constituent banks, and is raised or lowered in order to meet the legislated mandate of 2% inflation per year, as defined by the consumer price index. The MPC also uses quantitative easing, asset purchases, and other financial instrument manipulation in order to hone in on the target inflation point. One such ability – the Asset Purchase Facility – was added to the MPC in January, 2009 and has so far been responsible for quantitative easing programs since the financial crisis of 2008.

This focus has led some to criticize the MPC for being overly concerned with inflation and not focused enough on employment and economic growth. Positive change from inflation rate modifications can take up to two years to have a noticeable effect, so critics charge that the MPC is not doing enough to restore the British economy to full health.

The Monetary Policy Committee is one of the most influential organizations in the international community other than central banks themselves. They exclusively issue important decisions and opinions on interest rates and asset purchase programs that have a direct impact on not only the value of the currency, but also investments from forex traders.

For this reason, the monthly minutes from the MPC are followed closely by forex traders, as are announcements and addresses from Mervyn King and other members of the MPC. Often guidance on where the MPC is heading on a particular issue can be gleaned from these reports, as can indications as to the health of the economy as a whole now and moving forward.