Glenn Stevens (b. January 23, 1958) is the current governor of the Reserve Bank of Australia (RBA), the central bank of Australia. Stevens was previously an economist and has held numerous positions with the Reserve Bank since 1990. As Governor of the RBA, Stevens is the point person for monetary policy in Australia, both at home and abroad. He is also the representative of Australia for the annual G20 Summit and has represented Australia on the global scene on several occasions, particularly since the 2008 financial crisis.

Prior to beginning his term in 2006, Governor Stevens was the Deputy Governor of the Bank, beginning in 2001. He was previously head of the Economic Analysis Department and International Department, and was also Assistant Governor from 1996 to 2001. On September 18, 2006, he replaced Ian Macfarlane as Governor, and vowed to carry on the traditions created by his predecessor for an independent central bank. Stevens’ term is for seven years; it expires in 2013.

Stevens’ role as Governor of the Reserve Bank of Australia

He is the central person responsible for monetary policy in Australia and serves on the Reserve Board of the Bank, which plans monetary policy strategy and makes decisions regarding interest rates. Stevens has in the past drawn strong criticism for his willingness to manipulate the interest rate, such as in 2008, when he predicted inflationary pressures and increased the interest rate by 50 basis points. 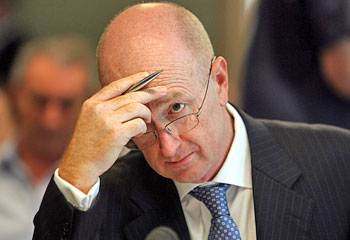 Prior to Stevens’ term as Governor of the RBA, the Australian dollar (Aussie, or AUD), was a minor player against a strong yen and dollar. Since his term, however, the Aussie has become more and more attractive to foreign investors because of the Bank’s successes at maintaining the strength of the export-driven country’s economy. In particular, Stevens has frequently used interest rates as his tool of preference in combating the effects of the 2008 financial crisis that saw global liquidity dry up and markets come close to collapse.

Because of this and other actions, Stevens is viewed primarily as a hawkish central bank governor. After raising rates in early 2008, he spearheaded a cut to rates by 300 basis points in the fall of 2008, only to become the first major central bank governor to raise rates after the crisis in October, 2009. In fact, most critics point to his proactive rate slashes of up to 425 basis points in 2008-2009 as one of the main reasons why Australia performed so well during the global recession.

During Stevens’ first term, AUD/USD has climbed from approximately 0.72 to a peak of just under 1.05. This has given the Aussie the reputation as one of the world’s ‘safe haven’ currencies, due to its strength at a time of weakness for other major currencies. One challenge facing Stevens for the near term is the potential economic slowdown of China, which is one of Australia’s main customers for raw material exports.