The ADX or Average Directional Movement Index was invented by J. Welles Wilder who initially published detail about this popular technical trend indicator in 1978 in his book New Concepts in Technical Trading Systems.

The ADX is a bounded oscillator with values between zero and 100 that is computed using an averaging process from two additional indicators known as the positive and negative Directional Movement Indicators or +DI and -DI.

Most comprehensive technical analysis systems will include a version of the ADX indicator system, which is typically plotted using a default parameter of 14 periods, as was originally suggested by Wilder. 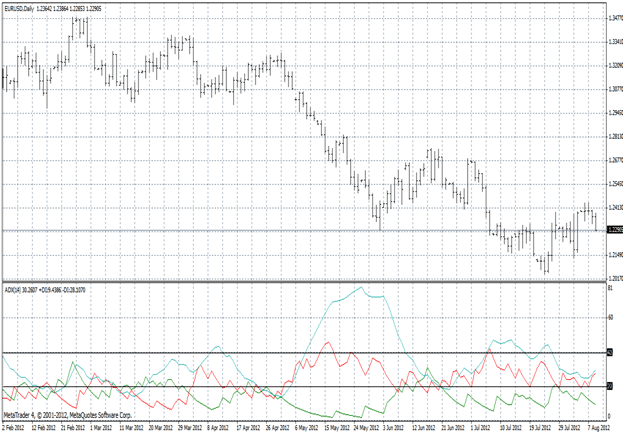 The ADX indicator is then typically calculated by taking a 14-period exponential moving average of the absolute value of the difference between the DI+ and DI- lines divided by their sum. The result is then normalized by multiplying it by 100 to obtain the ADX line, which is typically plotted in an indicator box along with the +Di and –DI lines.

The graph shown above is a daily bar chart showing the spot exchange rate for the EURUSD currency pair. The indicator box below the exchange rate graph depicts the 14-day Average Directional Movement Index or ADX(14) plotted in pale blue along with the +DI(14) and –DI(14) drawn in green and red respectively.

Note also the solid black lines drawn at the 20 and 40 levels in the ADX(14) indicator box. An ADX reading of less than 20 indicates that only a weak trend exists, while a reading of over 40 indicates a strongly trending market. The ADX is considered a lagging indicator of a trend since a trend needs to exist before it will be signaled by the ADX.

The Average Directional Movement Index, the +DI and the –DI have many applications for technical analysts. These uses primarily relate to the identification of trending markets, their direction and how strong any prevailing trend happens to be.

For example, a trader might only want to apply a particular trading system in a trending market. In this case, they might wait for an ADX reading of greater than 20 to take a position based on their trading system.

Traders might also use the ADX, -DI and +DI combination to generate trading signals. For instance, they could wait for the –DI line to cross the +DI line and then for the ADX to exceed 20 to take a position. They could then take profits once the ADX had moved back below the 20 level.