Home - Forex Education broken down into useful sections - A list of proven Forex indicators that actually work - What are the Most Common Chart Patterns?

What are the Most Common Chart Patterns?

One of the methods for making decisions based on technical analysis involves analyzing charts of a currency pair’s exchange rate as it moves over time in order to identify classic chart patterns as they form.  Once one of these top chart patterns has been observed, it allows the technical trader to make a forecast about the future direction and magnitude of a market move after the pattern breaks out. 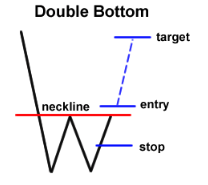 The sections below will cover and illustrate some of the most reliable chart patterns — such as triangle, wedge, flag, pennant, and head and shoulders patterns — that a technical forex trader can use to help them establish profitable positions in their online trading account.

An easily recognizable chart pattern is the triangle. As its name suggests, this pattern tends to resemble a geometric triangular shape, and is usually characterized by a period of consolidation between converging trend lines that reflect support and resistance in the market.

Triangles are among the best chart patterns and are typically accompanied by declining trading volume as the market consolidates. Although expanding triangles are also sometimes observed, most triangle patterns converge in either a symmetrical, ascending or descending manner.

In addition, triangle patterns are usually continuation patterns. This means that the market continues in the direction that it was moving in originally before it paused to form a triangle after it breaks out of the triangle pattern. Figure 1 below illustrates a symmetric triangle pattern.

A wedge pattern is a consolidation pattern that looks similar to a triangle, but both converging trend lines slope in the same general direction. The slope of the wedge is typically against the prevailing market trend, and they can either be continuation or reversal patterns.

The classic flag and pennant chart patterns are also among the most common chart patterns, and these continuation patterns both involve the market moving sharply and then briefly consolidating, before breaking out in the direction of the initial sharp move.

Another common chart pattern is the Head and Shoulders. This reversal pattern can be found at either the top or bottom of a market.

Figure 5: A schematic bearish Head and Shoulders Top pattern bounded between parallel horizontal lines and followed by a downwards neckline breakout. The pattern’s measuring objective is illustrated with white arrows.