Home - Forex Education broken down into useful sections - What you should know about Stock Trading? - Trading Apple stocks

Apple is one of the biggest technology companies to ever exist and designs develops and sells a variety of products, including consumer electronics, computer software, and online services. Formerly Apple Computer Company was first founded back in 1976, later changing its name to Apple Computer, Inc in 1997, until rebranding once again as Apple Inc in 2006. Apple is traded on NASDAQ as is widely regarded as one of the Big Four technology companies, alongside Amazon, Google, and Facebook. Apple has been on the tech market for quite some time, but it’s safe to say that it rose to its current success when they started rolling out iPhones, along with iPad tablets and Apple watches.  Apple was founded by Steve Jobs, Steve Wozniak, and Ronald Wayne. In just a year, the company started to take off, selling multiple computers, specifically their model Apple II. But there were challenges along the way too. Specifically, the fact that while Apple delivered top-notch products, they were also quite pricey which limited the number of consumers that would have access to this product. In addition to that, there was always some tension between the founders until Wozniak departed from the company and remained an honorary employee while others resigned and founded NeXT. 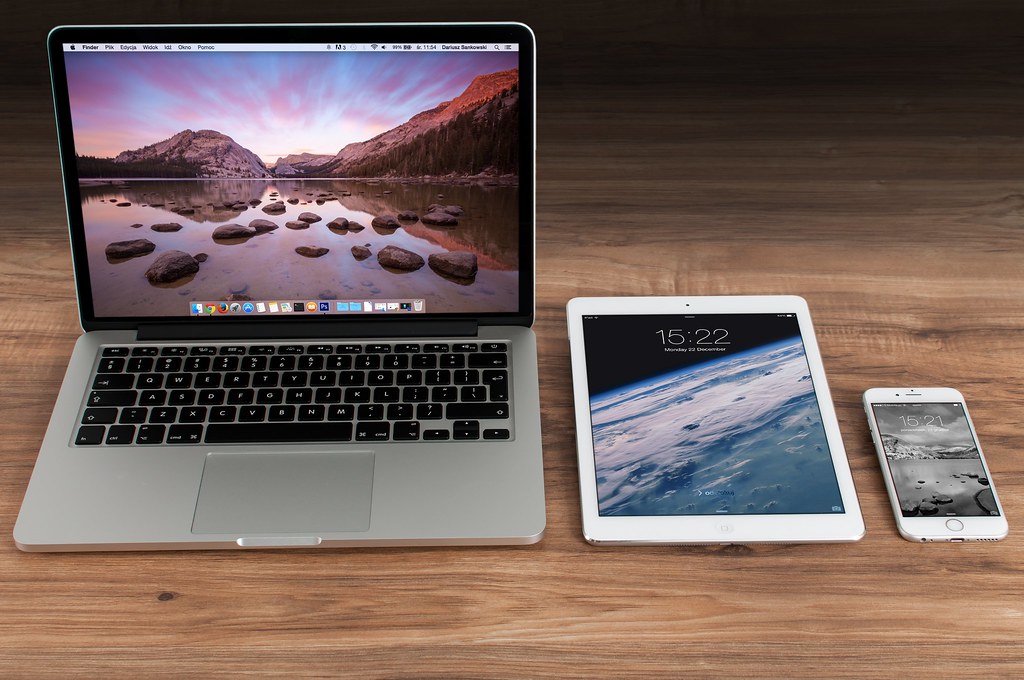 When Microsoft started to gain more control and popularity in the market it affected Apple quite heavily, and the company ended up losing market share to the lower-priced Microsoft. Over the course of years, Apple managed to regain its original glory and expand on it with very precise moves and focus. Currently, Apple has a yearly revenue of $300 billion, and it is the world’s largest technology company by revenue, also one of the top three mobile phone manufacturers, along with Samsung and Huawei.

The company is actually the first public U.S company to be valued over $1 trillion. while also having one of the highest brand loyalty levels which would be evident for anyone that pays attention to the electronics. As most big companies Apple is also constantly under fire for its origins of source materials, labor practices and environmental practices, which all of these topics are becoming more and more important to the modern customer. Despite the many controversies, the company remains one of the most popular and coveted names on the stock market and many people consider Apple to be one of the most dependable and profitable investments. As the popularity of Apple grows, there is a good chance the stock prices will continue to rise in the upcoming years. If you’re considering buying apple stocks here’s everything you need to know about their stock history and what to expect in the near future. 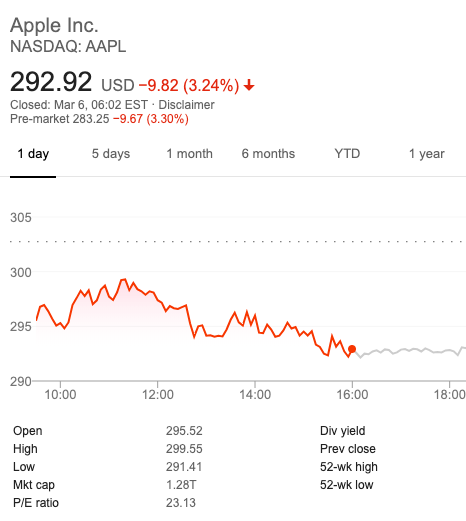 Apple has been in the business for almost 50 years, and they also have a very long history of trading stock. Apple first went public in 1980, selling 4.6 million shares at $22 per share, which got the company $100 million. Back in the day, this was a revolutionary IPO because no company has generated such capital after Ford Motor Company back in 1956. That day the stock rose to $29 and because of that, some people got millions in their bank accounts within a day. But the true winner of the day was, of course, Apple itself, which was worth $1.778 billion by the end of the day.

In 1984 Apple came out with Macintosh, the first computer without the programming language. This was one of the pivotal moments for the company that shot its instant success, largely due to an advertisement by Ridley Scott, that was played during the third quarter of Super Bowl. Advertising Macintosh at the SuperBowl proved to be a genius move and helped out with the sales of the products. But with this amount of success also came extra challenges, specifically when the pricing of the computer started to rub the people the wrong way. Microsoft saw the opportunity to again gain control over the market and started to offer similar services to those sold by macintosh which in turn lead to Apple dropping in stock prices by 20%, which at a time was the first recorded case in history to have the decline in sales of this scale. All throughout the 90s the company was struggling to get to its original success because the pricing of the products but also with multiple unsuccessful consumer-targeted products continued to flop. Among them, there were digital cameras, portable CD audio players, speakers, video consoles, the eWord online service, and TV appliances. And none of these efforts helped the company to get more consumers and increase their share price, as they continued to slide. Up until 1997, Apple continued to bring underwhelming profits and delivered products that just could get the customer’s attention or their loyalty meanwhile Microsoft was gaining more monopoly on the market and delivering successful products to the customer. After almost a decade of struggling, Apple finally got some positive developments. If you’re thinking about trading with Apple stocks then there are a few brokers that have enough experience dealing with it with professionalism. 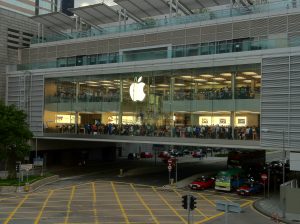 Going back to profitability

As we’ve mentioned before meanwhile, Steve Jobs, one of the original founders of the company was off working on NeXT, but as Apple acquired the company Jobs was brought back to Apple as an advisor and this is where Apple’s redemption story begins. At this point, Apple was ousted because the company has been performing poorly, having a three-year record-low stock price and financial losses. Jobs took it upon himself to expand Apple’s portfolio, making multiple acquisitions focused on digital production software or professionals and consumers. Over the next few years, these efforts paid off as was clear by the rising stock price of the company. While by the end of the millennium Apple stock was in constant decline, by 2002 the prices increased almost tenfold, growing from $6 per share to $80 per share.

This success would carry the company to its next big break, mobile phones. They announced that the company would be shifting its focus on more consumer electronics, putting less emphasis on computers. When in 2007, the company announced the release of iPhones, the company sold 270,000 units in the first 30 hours of sales and this launch completely changed the industry, creating a new standard for the company. The stock prices followed and reached an all-time high $300. As the iPhone and iPod Touch became available for purchase, within a month the stores have sold around 60 million units with a registered daily revenue of $1 million. The success carried on to the launch of Ipads giving the company even higher share prices. 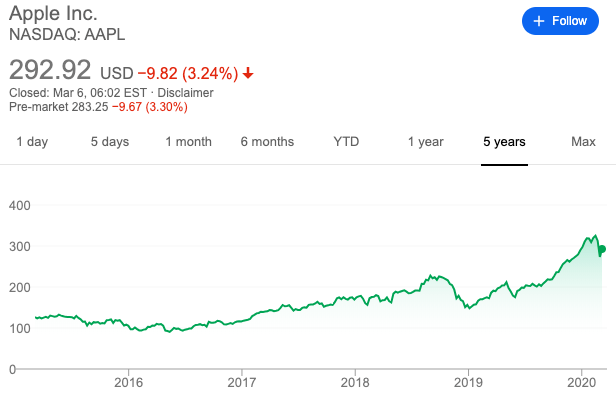 Right now the company is doing better than ever, maintaining the above $300 share price, even reaching $324 mark in February of 2020. Apple is considered one of the most profitable and “safe” companies on the stock market, and while it has definitely faced many challenges, with the help of Steve Jobs and now Tim Cook as well, the company is definitely on the right track. It knows it audience it has high customer loyalty and is known for being innovative and in tune with the demands of the customers.  Out of all these characteristics of the company the customer loyalty might be the most important because no matter what challenges apple might face in the future, the fact that so many people chose to purchase their electronics exclusively means that they will always have a target group and consumers willing to give their products a try. Aside from that having the leadership that Apple currently has, means that the company is getting the directions from someone who not only knows apple so well but is also experienced enough to foresee the unpredictable and to create something that will deliver the desired results to the customer before anyone else can do it.

If you’re thinking about buying stocks specifically the Apple stocks, now is definitely a great time to be investing in the company since its prices are as high as ever with the prospects of steady growth. Apple has proven to be a company that can rise to any challenge and can continue to function and develop as the needs of the market change.  This is one of the main reasons why people feel so comfortable investing in this particular company because it has been around for 50 years, it has proven to be resilient and innovative but above all, it has proven that it knows and can predict what the customer will want years ahead of time.