Home - Forex Education broken down into useful sections - What you should know about Stock Trading? - Is it a good time to purchase Google stocks

Is it a good time to purchase Google stocks

Google is used worldwide and is the most popular search engine that delivers fast and accurate results. The company is currently a subsidiary of Alphabet Inc and has been operating under this company since 2015. But Google has been around for far longer than that and was first founded in 1998, by Larry Page and Sergey Brin, but they are now mostly involved from a distance and have sworn off the day-to-day managerial duties in the company. Google is one of the Big Four tech companies among Amazon, Facebook and Apple. Google specializes in Internet-related services and products and is most famous for its advertising technologies, its search engine and cloud computing, all of which are dominated by Google at this point.

They also deal with hardware and software. Page and Brin may not be as involved with the company these days, but they do hold 56% of stockholder voting power through supervoting stock. Google has been an active part of the tech revolution and has constantly developed innovation and improved services. Over the years, the company has grown and developed into a tech giant and has created a completely new wave of advertising. The initial public offering happened in 2004, and at a time the share price was $85 and the company was valued at $23 billion. The company offered 19,605,052 shares and made it easier for investors to buy stock. This move has largely been deemed a success and the company has continued to grow ever since. 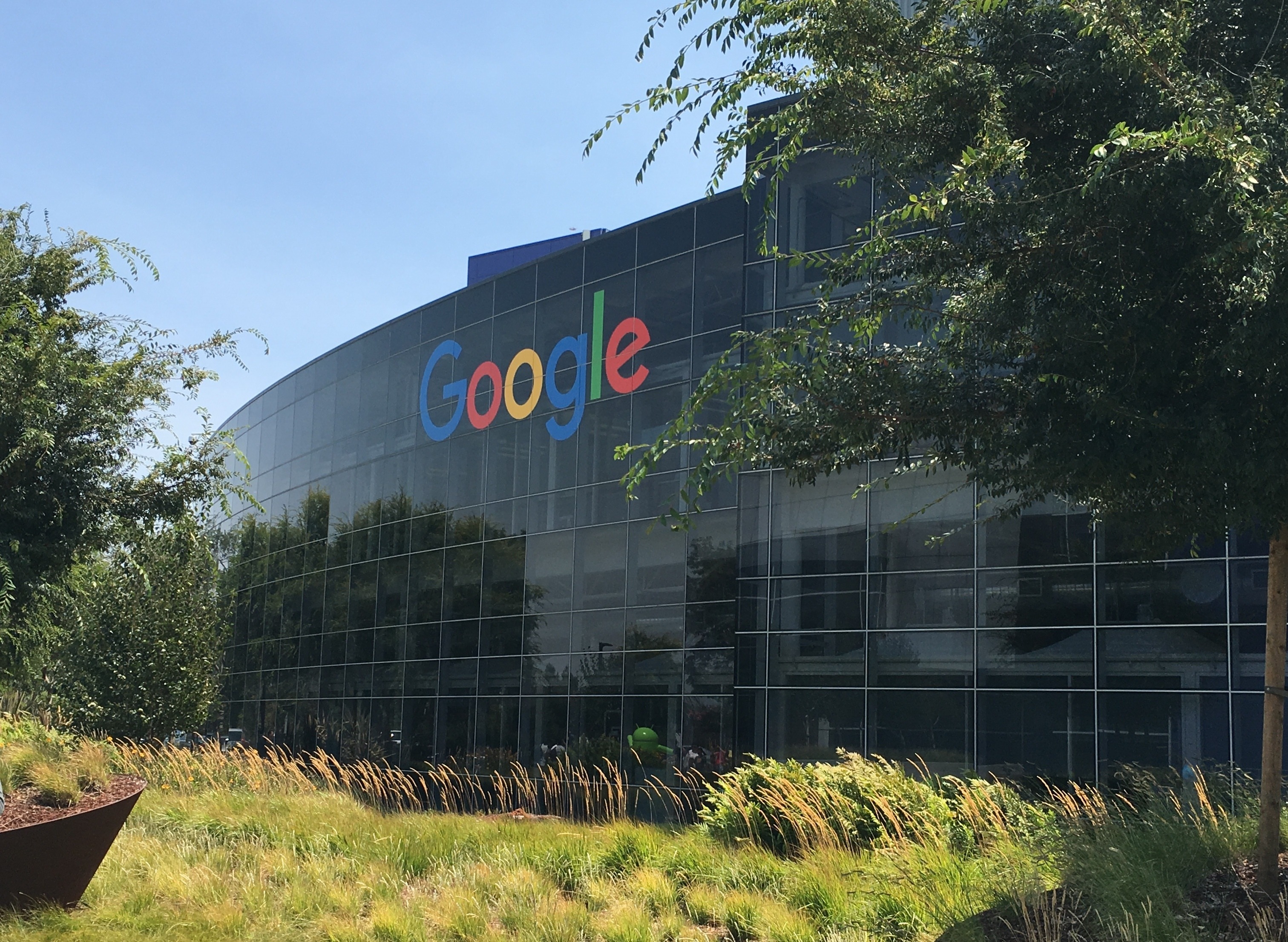 Over the decades of Google’s developments, it has gotten into quite a few controversies around the mishandling of customer data and selling it to advertisers. Google’s reputation has taken a few hits and the company is still working on restoring the trust among the customers, but the company hasn’t really lost its appeal to investors and continues to gain new users on a daily basis and growing its assets.  Being one of the most well-known companies across the world means that many people are thinking about buying Google stocks, or now Alphabet stocks. This might seem like a no brainer decision since the success of this company is definitely impressive. On top of that Alphabet is the first tech company to surpass $1 trillion mark and this milestone further helped to establish Google as a leader in the industry. That is why Google stocks are so valued and thereare many broekrs dealing with Google stocks with a lot of experience.

Google is the most visited website in the world, while other services that operate under Google are also in the top 100 most visited websites, most popular among them being Youtube and Blogger. On top of that, the company leads the development of the Android mobile operating system. in 2017, Google was named the most valuable brand in the world but now has transferred this title to Amazon. To make an informed decision on whether or not you should purchase Google stocks, we’ve combined all the necessary information about the company’s stock history and what you need to know before purchasing shares in Google. We will also discuss the future prospects of the company and if there is some long-term potential with Google and Alphabet. 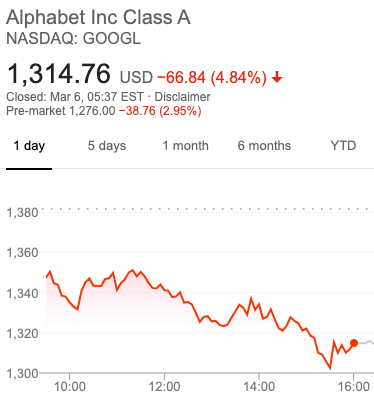 The IPO was a success for Google but the company now operated under Alphabet so we will rely largely on the information from 2015 and beyond to identify the patterns and reoccurring trends that follow the tech giant. Alphabet is a multinational conglomerate and was created through a corporate restructuring of Google. At Alphabet Larry Page is a serving CEO and Sergey Brin is a president. Upon the first IPO as Alphabet, its stocks were sold at $572 and have seen been growing, even if inconsistently. The shares remained at around $500 mark up until the end of 2015, and had a massive spike in 2016, selling for almost $800 per share. All throughout 2016, the share price managed to stay above the $700 mark, with a few ups and downs in pricing over the course of a year, but in January 2017 the stock price was $825 it was a great year for Google and Alphabet.

The original founders stated that the main reason for the restructuring of the company was to distinguish their internet services and make them cleaner and accountable while giving more autonomy to group companies that were Google subsidiaries but weren’t necessarily dealing with the internet. But there is a lot of speculation that this move was to try and recover the company from all the controversies that the company has been dealing with over the last few years. there have been many cases, specifically about the regulation within the companies about this own limitations and what ti can use its power for. The infamous phrase that was actually a part of the Google ethical policies, was “Don’t’ be evil”, which most people found too vague and irresponsible. There were also irregularities between what Google was telling its customers and what it was actually doing with the information that was passed to the company because of their services. Particularly the advertising rubbed most Google users the wrong way, saying that Google was selling the information to third parties without the consent fo their users. Over the years these claims really damaged the trust that most users had for the company and Google tried really hard to not only restore the reputation among its customers but to patch up its relationship with the government bodies as well. That is because Google executives have often been asked to speak publicly about this topic in front of the court. When the questioning was supposed to take place the CEO of the company Larry Page failed to show up to the hearings which made the relationship between the two entities even more complicated.

Google is now trying to get involved in other areas, like financing, eWallet, and even oil. Which they will have a hard time doing unless their relationship with the authorities is positive. The company is already facing the pushback from the officials over its desire to get into the frictionless payments industry and offer its customer Google pay and get access to people’s financial information. And while it managed to do that with collaboration to Citibank it was forced to deal with a lot of pushback from the government and will likely continue to experience this over the years to come. 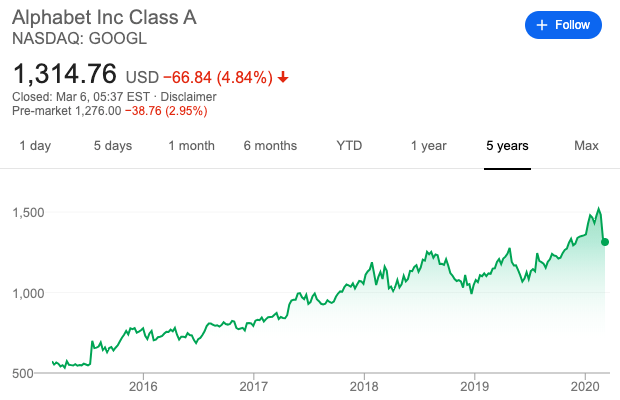 2018 was the year the Alphabet stocks passed the $1000 mark at the very beginning of the year and managed to stay above it fr the most part, only coming below $1000 for a little while towards the end of the year, but there was not much growth overall since the stock ended the year with $1052 per share cost. This is when lot fo controversies around the company’s integrity were happening so the investors were starting to

Sign up with XM now
away and question the future of the company that gets attacked on a daily basis. Google proved to be resilient and showed consistent growth during the first third of the year reaching $1277 price, their all-time high, around April 2019. The shares did come down to $1068 in June, the stock has been rising consistently since and at the beginning of 2020 the company surpassed the $1500 mark, which was a big deal for the company and it reinstated the confidence that people had in Google and Alphabet even amidst all the controversies that sill surround it.

Buying Google stocks is definitely a long-term investment because the ups and downs are ver refocussing trend here, and more so that in any other Big Four tech companies. While most people do consider stocks to be a long-term investment anyway, just in case you were hoping for consistency and continual growth without any hurdles Google is definitely not that. But over the years it has provided its investors with innovation and dependable service that have managed to get out fo-ti even the most severe controversial and they have a very loyal customer base, that wants to be on board with Google’s new projects.

The company itself still has a long way to go when it comes to privacy policies and the way they handle customer information. company could greatly benefit from the increased transparency, but what also makes this investment worth your money is that Google is on the front of every tech development and innovation, they are leaders in AI and cloud computing and are currently offering these services to the most famous and popular companies in the world. The quality of their products and service has always been great and in the future, as these services become more important we will likely see an even bigger interest in this company that will make sure that stock is more stable and growing faster in price.