Home - Forex Education broken down into useful sections - What you should know about Stock Trading? - Everything you need to know about Microsoft stocks

Everything you need to know about Microsoft stocks

Microsoft is a pioneer of the international tech community in many ways. It develops, manufactures, licenses and sells multiple product types, including computer software, which is what it’s most famous for, consumer electronics, personal computers, and related services. The company created a line of operating systems, Microsoft Windows which is the most used operating system in the world. The Microsoft Office suite is used all over the world across many different lines of work. The company is also a huge part of the gaming industry and its flagship products include the Xbox video game consoles.

Microsoft Windows 10 is the most used and most popular operating system in the world by the 2019 statistics. The company is recognized around the world and delivers services to people across different continents. The name of the company is a combination of the words microcomputing and software and is currently ranked as number 30 in the Fortune 500 list. Its rivalry with Apple has been going on for decades at this point and Microsoft did lose to Apple a couple of years back. in 2010. But as of right now the company is still the most valuable publicly traded company in the world and in April it reached the trillion-dollar market cap, something Apple has done years before.

But this milestone served as a reminder that Microsoft has the resources to bounce back and get the customer on its side, even though the customer loyalty is not as high with Microsoft as it is with Apple. The company has always stood out as an exception to the rule by its approach to sustainability and ethical practices. As this subject is starting to get more attention, Microsoft policies will also start to get more coverage. The company is already carbon neutral, meaning that they compensate for all carbon emission that the production process at Microsoft causes. But as the topic of climate change becomes more prevalent, the company has now vowed to become the first company of its kind to actually be carbon positive, meaning that they will not only compensate the carbon emission they are causing but will actually put more effort into their sustainability practices and will go beyond net-zero emissions to actually remove and offset additional emissions from entering the atmosphere.

This move will likely make the company even more appealing to the investors in the future as the subject of ethical and sustainable practices becomes more popular. The consumers themselves have also become more aware of the problem meaning that the demand for products from the companies that are willing to put in work to make their practices actually benefit the environment, it greatly increases the chances of the longevity of the success of the company. That paired up with the long-running history of Microsoft and its reputation on the stock market, Microsoft is one of the best companies to invest in right now that is already steady and profitable but actually has great potential and will likely continue to rise in stock. Here is everything you need to know about the trading Microsoft shares and its brief history. 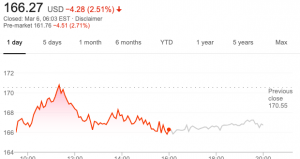 The history of Microsoft stocks

Microsoft was founded by Bill Gates and Paul Allen in 1975, and rose to prominence in the mid-1980s, through MS-DOS followed by Microsoft Windows. The company went public in 1986 and saw immediate success as the stock shares rose in price almost immediately. After the company went public allegedly the event created 12,000 millionaires at the company and 3 billionaires as well. While the company continued to stay within its original line of work, with time it managed to diversify from the operational systems and has made multiple acquisitions, one of the more prominent ones being LinkedIn which the company purchased in 2016 for $26.6 billion dollars. There was never a doubt that Microsoft was a successful company but during its years on the market, it has seen some ups and down, particularly because of its main competitor Apple.

While the stocks would remain mostly stable, in 2013 the company suffered its biggest one-day percentage sell-off in years, after the concerns among the investors on the poor stats on Windows8 and Surface tablet leading the company to a $32 billion loss. This was a huge hit for the company after which it decided to branch out and change its strategy. The same year after Microsoft saw the biggest drop in its share prices, they diversified the business into four new business divisions, Operating Systems, Apps, Cloud, and Devices. All the previous divisions would be dissolved but without any workforce cuts. After the entire rebranding, the company that was more modern and much more in tune with the demands of the customer Microsoft stocks have been rising steadily for years now, with very few glitches here and there.

When Microsoft launched its Initial Public Offering in 2986, the stock price was just $21 dollars, and after the trading day, the price closed at $27.75 just a little under what Apple Inc had after its initial IPO day. In  2010, Microsoft made the decision to make nine stock splits, and the IPO shares were multiplied by 288, peaking at $199 per share. The company began offering dividends in 2003, beginning at just 8 cents per share, followed by 16 cents, soon switching to quarterly dividends in just two years. Though the company dividend payouts were increasing, the price of the stock remained steady on NASDAQ for years to come.  Microsoft stocks are as high as ever,  currently trading at $170 per share. It has been one of the most stable stocks in the business for the majority of its existence and that is why it is a great investment for everyone wanting to get into stock trading. Microsoft is a dependable and promising company that has always managed to regain its status again and again and prove itself worthy. It reached its most recent high on February 14, trading at $185 on NASDAQ. Now many brokers offer trading options with Microsoft and here’s some of the brokers that have great reviews:

Standard & Poor’s and Moody’s Investors Service have both given AAA rating to Microsoft, and they have one of the smallest unsecured debt in the business.  the reputation of Microsoft, unlike the companies in Big Four, who have all been involved in some sort of controversy regarding their methods or their ethics. Microsoft has stayed largely clear of such scandals which is also why their stocks have remained steady and growing for decades now. 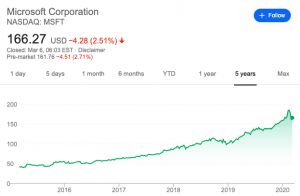 Is it a good time to trade Microsoft stocks?

It’s a good time to trade Microsoft stock because the company is currently on the rise and is gaining newer consumer groups who want to be involved with ethical companies, something that Apple can yet claim to be. The company will likely accelerate its growth in the upcoming years and will deliver even better results to all of its investors.

Microsoft’s move to scale back on hardware and has instead focused on cloud computing, a move that helped the company shared reach its higher mark. As mentioned above, these days Microsoft is behind the most popular operating system in the world, which was something that would have seemed unlikely at the times when Apple seemed invisible. The way in which Microsoft does business is actually quite unique to the tech world and it has managed to stay loyal to its principles along the way. Back in 2013, during its biggest rebranding, it managed to change the entire setup of the company without any workforce cuts because this is the company that values stability and loyal workers, which is something that is lacking in most companies of this scale. The future of companies definitely lies in more ethical practices and more transparency. The fact of the matter is that Microsoft might have the potential that Apple no longer has. It is true that Apple has diversified its product range greatly and might continue to do so in the future, but as the priorities of the local customers begin to change on a more major level, the current system that keeps the stock market moving might change.

It is a very promising time for Microsoft and trading its stocks might be a perfect thing to take advantage of the situation and become a part of the company’s brighter future, because the past year has shown great potential for the company’s future and for everyone trying to get involved in trading this might be the perfect company to start with. It is dependable and stable while also being innovative and still full of possibilities for growth and development. Considering the company’s reputation within the industry professionals this is one of the best deals you will get while trying to trade stocks, so don’t hesitate to start with Microsoft.