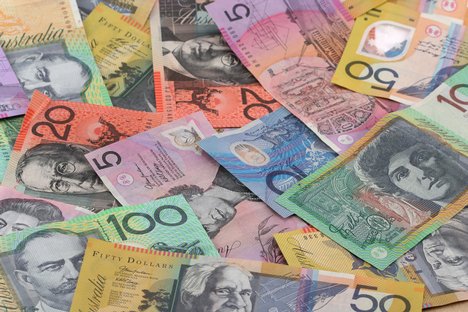 The single currency and sterling both dropped on risk aversion, USD/JPY also fell as stock markets as Asian stock markets followed the selloff in European and U.S. equity markets and tumbled, most European indices slipped over 3% (STOXX 50 and FTSE 100) with German DAX dived over 5%, then U.S. major indices were also sharply lower, DJI (-5.55%, biggest selloff since December 2008), S&P 500 (-6.66%) and NASDAQ (-6.9%). Nikkei 225 and Hang Seng opened lower this morning and Nikkei broke 9000 and currently still down by 2.3% whilst Hang Seng once plunged over 6% below 20000 but has rebounded from low. The greenback against the Japanese yen back to the launching pad level right before Bank of Japan intervened the currency market last week, however, still heard decent bids around 77.00. Japan’s Finance Minister Yoshihiko Noda repeated today that he is closely watching the financial markets, then BOJ Governor Masaaki Shirakawa also said that he is worried by volatile exchange rate and excessive yen rise would have a negative impact on the country’s economy, however, early comments from Noda saying G7 did not discuss specifics on intervention in the meeting yesterday gave traders signal that there may not be joint intervention like back in March. USD/JPY did rebound briefly on verbal warnings from Japanese officials but the pair was down again due to the lack of real action by BOJ/MOF. Bids are still noted from 77.00 down to 76.50 with sizeable stops remain below 76.20 and 76.00, On the upside, offers are lined up around 77.80-90 with some stops seen at 78.00 but more selling interest should emerge around 78.50 with next batch of stops located at 79.10 and 79.50.

Intensified risk aversions on free falling European and U.S. shares pressed euro sharply lower yesterday from 1.4432 to as low as 1.4130, statements from Standard & Poor’s also bough relief to the greenback as the rating agency indicated that despite the downgrade of U.S. sovereign rating, the ratings of some states and local government will be kept and stay above the statues of the sovereign, S&P’s also stated that rating on U.S. banks will not be affected by the downgrade of nation’s sovereign. Having said that, the single currency rebounded in Asian session after finding decent demand from sovereign names, unwinding in EUR/JPY as Hang Seng recovered almost 50% of early losses also seen supporting the pair. Good bids from same parties are still noted from 1.4150 down to 1.4130 with stops placed below latter level, more buying interest is likely to emerge around 1.4100 and 1.4070 with next batch of stops below 1.4050. On the upside, offers are reported at 1.4250-60 and further out at 1.4300.

Sterling basically followed euro’s foot-steps, dropped throughout yesterday and hit a low of 1.6269 this morning on massive risk aversions and youth riots in London, however, cable also rebounded from low as Asian bourses bounced off lows. The release of better-than-expected UK data also seen lifting sterling, BRC sales data came in at 0.6% versus forecast of -0.5% and RICS House Price data also showed higher-than-expected number at -22.0% against consensus of -28.0%. The British pound is likely to confine in narrow range ahead of the release of UK June industrial and manufacturing production data at 08:30GMT with forecast at 0.4% m/m and 0.2% m/m respectively. Order books are relatively light today with some offers tipped at 1.6350-60 and 1.6380-90 with stops placed above 1.6400 whilst bids from Asian and Middle East sovereign names noted from 1.6300 down to 1.6270 with stops placed below 1.6250-60.

Continued safe-haven demand pushed Swiss franc higher again and Swissy was hovering near its record low formed at 0.7480 and stops below this level are in focus with option barrier tipped at 0.7450, offers are reported at 0.7650 with stops only emerging above 0.7700 and 0.7750.