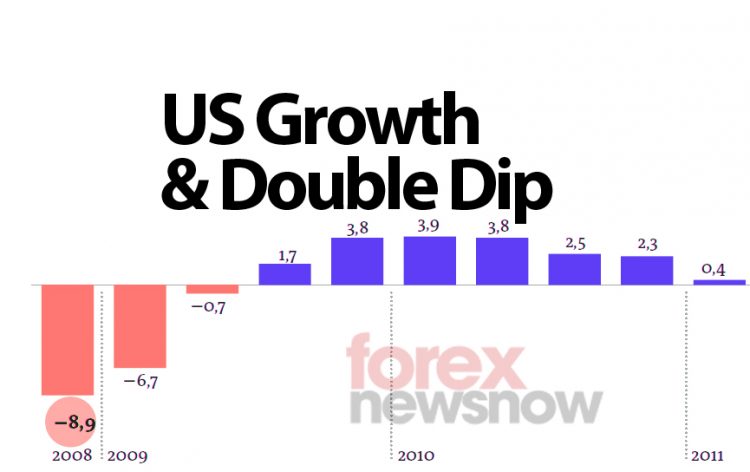 NEW YORK (ForexNewsNow) – Since the month of June the words “Double Dip Recession” have become one of the main buzz words used by both financial experts and government officials struggling to assess the trajectory of the Debt Crisis and the US economy. The expression, which is also called a W-Shaped Recovery, means an economic pattern in which a fall in gross domestic product (GDP) is followed by a resumption of growth, which then plunges again before restarting normally.

The last example of a “Double Dip Recession” in the United States occurred in the early 1980s. From January to July 1980, the U.S. economy fell into recession, its GDP sinking by 8% annual rate from April to June. A quick recovery was attempted and no later than the first quarter of 1981 annual growth had recovered to 8.4%. Since inflation became a problem during this recovery, the president of the Federal Reserve (Fed) at the time, Paul Volcker, increased interest rates and the U.S. economy fell again into recession with -6% annual growth from July 1981 to November 1982, before finally recovering and remaining somewhat stable until the end of the decade. During this time the National Bureau of Economic Research (NBER) officially recognized the US economic turmoil as constituting a “Double Dip Recession”  – becoming the only American institution to do so. The double-dip pattern also occurred, albeit in a much larger scale and over a longer time period, during the Great Depression. During this period a strong recession hit the country from 1929 to 1933, followed by a recovery from 1933 to 1937 and a new collapse from 1937 to 1939.

One could argue that a double-dip, even if it is only a very minor one, should be expected during any period where the government intervenes in an attempt to over-stimulate the economy during a time of recession. The intervention may temporarily invigorate the economy, but since the upturn has been artificially produced through government action it often times cannot remain sustainable as market forces return the economy to pre-intervention levels.

The current fears of a double-dip recession are also driven by the recognition that the heavily indebted industrialized countries can no longer afford to support economic measures designed to stimulate their unstable economies. At the same time the world’s emerging economies, which have largely driven global growth since 2009, are looking to end their supporting budgetary policies because of the inflation these policies have caused. This shift in the global economic system leaves many of the world’s most powerful economies on unsure footing in the near future.

Looking for a good broker? Here are the best US Forex brokers!

Playtech Is Going To Be Acquired By Aristocrat For US$2.9 Billion
Martin

Why is social trading one of the best ways to develop as a new trader?
Martin