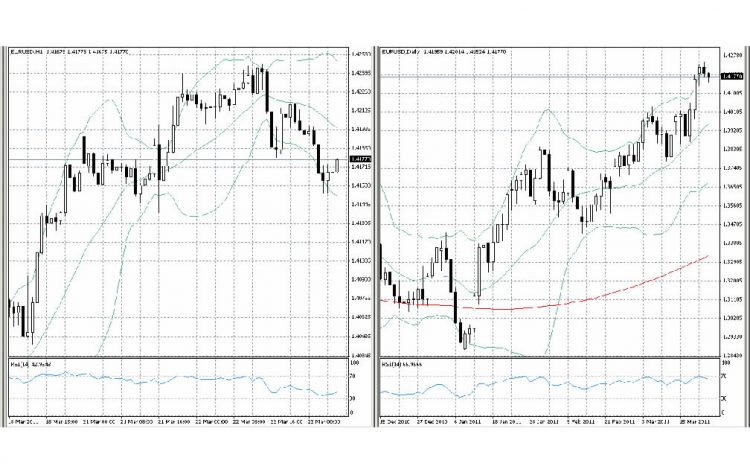 Technical Overview for the Major Movers

An overview of Tuesday’s realtime forex price action for the major movers shows that the Loonie weakened the most, although the Euro also fell slightly. In addition, the Aussie gained substantial ground, while the Yen was mildly higher.

A more technical EURUSD analysis shows that the rate made another fresh recent high on Tuesday at the 1.4247 level within an impressive rally that commenced at the important 1.2873 reversal point of January 10th. Although the rate ended slightly lower on the day, this rally in EURUSD is still expected to continue near term.

This most recent high continues to support a Euro forecast that targets the key 1.4281 reversal level of November 4th, 2010 in the coming sessions. Above that major resistance point, resistance then shows up at the 1.4579 level for EURUSD.

In addition, the rate’s key 200-day Moving Average is now at 1.3321 and rising. This indicates a bullish medium term outlook for the rate and its level should effectively limit downside price action until a significant trend reversal takes place in EURUSD.

Although EURUSD’s 14-day RSI has come off somewhat from its former almost overbought levels seen during last week’s dramatic rise, the indicator is still reading in the upper part of neutral territory at 66 that could impede upside price action in the near term.

Hourly and Daily Chart for EURUSD Chart 1: Side by side Hourly (left) and Daily (right) candlestick charts of EURUSD showing Bollinger Bands in pale green, its 200-period MA in red, trend lines in purple, and the 14-period RSI in pale blue in the indicator box below the charts.

USDJPY spent most of Tuesday’s session trading in a tight range between 80.83 and 81.27, an even tighter range than that seen the previous day. A sustained breach of either side of this range should yield a measuring objective of ~ 60 pips from the breakout point, with the rate needing to overcome resistance at 81.98 to push significantly higher.

Furthermore, the chart for USDJPY is still dominated by the rate having just made a fresh post-war low of 76.41 during last Thursday’s session. That level now remains key support to break in order to see further downside for USDJPY.

Until that support point breaks, look for additional corrective activity to the upside to prevail, with the current consolidation taking on the look of a possible pennant formation that could resolve into another sharp rally of a similar magnitude to that seen from 0.7641 to 81.98.

The Aussie rallied as far as 1.0127 on Tuesday and made a fresh recent high in its most recent sharp rise. The current up move began at 0.9704 on March 17th, and it seems to have brought AUDUSD back into its ascending wedge pattern that it had broken down from on March 15th.

If AUDUSD manages to overcome resistance at 1.0200, look for the rally to accelerate even more, with the next important resistance level showing up at 1.0255.

USDCAD has recently been correcting higher off of its latest long term low at 0.9666 seen on March 9th within its overall downward trend. Tuesday’s price action again pushed correctively higher to 0.9811, after net losses seen since the 0.9973 reaction high of March 15th.

Although another corrective C wave rally remains possible, USDCAD should eventually see selling pressure emerge if the medium term trend is to prevail. Furthermore, any short term corrective rally in USDCAD should meet resistance at the 0.9973 level and at 1.0057 around the key psychological parity point. On the other hand, look for the downtrend to reassert itself if key support at 0.9666 gives way.