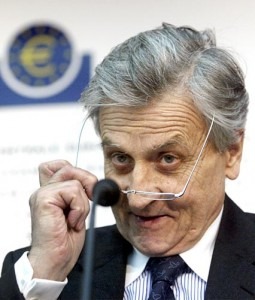 NEW YORK (Forex News Now) – The FNN team has drawn up a guide to the economic events most likely to impact euro versus dollar forex trading ahead of the coming currency trading week, April 26-30.

4:30 P.M. Trichet speaks: European Central Bank President Jean-Claude Trichet is set to speak at an event in New York. The ECB chief’s public appearances are important because he sometimes drops clues to future monetary moves, which often have an immediate on fx trading.

6:00 A.M. Gfk German Consumer Climate: This index, published by the Gfk research institute, is based on surveyed consumers and is a key indicator of consumer spending in the euro zone’s biggest economy.

2:00 P.M – CB Consumer Confidence (U.S.): This index published by the research group The Conference Board, which is based on surveyed households, is a leading indicator of consumer spending.

2:00 P.M – Federal Reserve Chief Ben Bernanke testifies: The Fed chief is scheduled to testify before the National Commission on Fiscal Responsibility and Reform, in Washington DC.

6.15 P.M. Federal funds rate: This is Fed’s decision on its key interest rate, which it announces with a statement by its policy setting Federal Open Market Committee. This decision will dominate the day’s FX news.

2.30 P.M. – U.S. Crude Oil Inventories: The U.S. Energy Administration is due to publish this inventory data, which also impacts the Canadian dollar, due to Canada’s large energy sector.

7.55 A.M – German Unemployment Change: This official report shows the change in the number of jobless German workers; as such, it is a key indicator of the health of the country’s labor market.

12.30 P.M. – U.S. Unemployment Claims: The Department of Labor is due to release this report on the number of workers who filed new claims for jobless benefits, providing key curreny trading news.

on the overall health of the U.S. economy.

8.30 P.M. – U.S. Preliminary GDP: This report is the first estimate of the United States’ gross domestic product, the broadest measure of economic activity.

In addition to the scheduled events listed above, forex traders should pay attention to further developments in Greece’s debt crisis, which forced the euro to a one-year low last week. Efforts to secure a rescue package for the country are likely to overshadow most other FX news over the coming week.