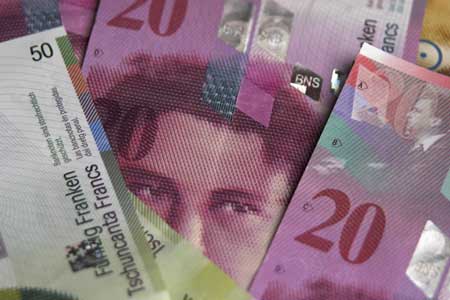 NEW YORK (Forex News Now) – The Swiss Franc has been falling over the last couple of weeks in currency market trading, and that would be just fine with the Swiss National Bank.

Earlier this year, the Swiss central bank had intervened in order to weaken its currency against the Euro, and by extension, the Dollar with unwanted results – they were forced to give up. The way the currency market trading had been going, it was obvious that the market was too enamored with the Franc to be stopped.

As is the nature of these types of moves, they almost turn into a “mania” of sorts. This is when currency market trading becomes more of a psychological science than an economic one. Everyone wants to buy the Franc, and levels that were previously impossible are suddenly possible. Traders begin to get greedy.

When this happens, there comes a point where there isn’t anyone left to buy or sell, depending on the direction. The Franc had reached that point, and then some. Because of this, we have seen a gradual decline in the value of the Franc against the Yen, Dollar, and Euro, as well as many other currencies.

While this is simply a pullback in a longer-term trend, it should not be ignored. In fact, on the attached weekly US Dollar / Swiss Franc chart, you can see a clear doji candle at the bottom. This type of candle shows clear indecision, and compounded with the fact that this has been a one-way trade for quite some time, it was inevitable that a pullback had to happen. On the daily chart, there was a perfect hammer at the bottom, a bullish sign.

It only makes sense when currencies fall like that there sooner or later people take profits, the bottom feeder show up, and faith gets tested. While the sign is still up at the moment, the “parity” level is approaching, and should see renewed selling interest.