Home - Top Stories - A Review of Tradeo.com
Top Stories
by ForexNewsNow Team on May 8th, 2012 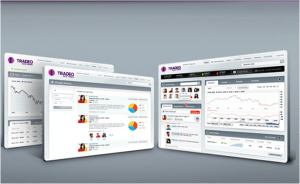 ForexNewsNow –  Tradeo.com aims to be the Facebook of financial markets and gives you the ability to make your forex trading social.  By connecting with friends and other traders from around the world, you can learn more efficiently, have more fun, and receive more support than you would trading by yourself.  Tradeo gives you a forum to discuss ideas, connect with other traders and learn from your successes and failures. If trading socially sounds good to you, Tradeo is a great place to start.  However, Tradeo lacks many of the features that other premium forex social networks have, such as the ability to automatically copy and trade based on the moves of your connections.

Tradeo is first and foremost is a social platform. It gives you an interface very similar to Facebook, where you have a public wall that you and your friends can post to as well as private messaging and online chats. All of your trades can be posted to your wall within a few minutes of you making them and you can read and comment on other trader’s positions. There is also support for custom groups, so no matter what your experience or trading style is, you can find a group that can help you grow as a trader.

Tradeo also offers up to date market information and an in-depth analysis of your own and your friend’s accounts. They offer charts and quotes on over 50,000 market instruments, with line and candlestick charts and will soon be adding support for indicators as well. The news aggregation feature is powerful as well, and lets you configure exactly what you want to read and what sources you want to get your information from. And like most other social forex broker interfaces, Tradeo lets you see the current market sentiment on an easy to scan page that aggregates all open trades over all the traders Tradeo has. There is also integration with Facebook and Twitter so you can post your trades automatically in real time to these accounts as well.

One of the features that is unique to Tradeo is the economic calendar. While you can find economic calendars at nearly every forex broker, Tradeo lets you filter the events by importance and also allows you to discuss them and their implications with other traders in real time.

Platform Ease of Use

The Tradeo interface itself is very intuitive, clean, and easy to use. However, it isn’t a broker so you can’t trade or sell directly through their platform.

It’s hard to beat the social features of Tradeo. They are more developed and slicker than almost every other one of the interfaces covered in our social currency broker reviews. Hundreds of different brokers are supported and trades are updated every two to four minutes. And best of all, the service is absolutely free.

However, many brokers provide the same information to account holders that Tradeo gives out to its traders; you just can’t discuss the implications of that news in real time. Tradeo also doesn’t offer the same powerful analytical tools that other social brokers do and lacks the ability to directly trade from its platform. This also means that you won’t be able to automatically follow traders like you can on other social platforms.

Tradeo is a great place to connect with other traders, but it lacks the powerful analytical tools and the ability to trade right through the platform. While this is good for learning and growing as a trader, it isn’t as useful if you want to put the information to use right away. If the lack of these features is a problem, you should check out one of the other forex social networks covered in our reviews.

The SEC made the award public without naming the whistleblower
Martin