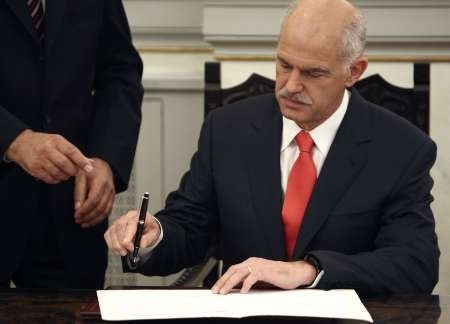 On Thursday, global core bonds recovered some of Wednesday’s sell-off  losses, as equities lost attractiveness during the US session, partly on the back of some vague rumours about Germany losing its AAA-rating and Germany installing a short selling ban. At the same time, there was market talk about the default of US municipal Harrisburg ($3.3B). In the US, yields dropped by 2-to-7 bps, the belly outperforming, while in Germany, the curve bull steepened, the 2-year yield shedding 7 bps, while the 30-year ended virtually flat. Volumes traded were very modest in the Bund, but rather high in the US market.

Intra-day, the Bund started the session on a weak footing, as the sell-off that hit the market on Wednesday continued. However a bottom was rapidly found, as equities peaked shortly after the opening and slowly slid lower. The Bund was lifted off its bottom before sliding into the sideways trading mode that lasted until into the US session. There was a small positive reaction of Treasuries (and Bunds) on the weaker initial claims, but a stronger opening of equities pushed bonds off the highs.

About half an hour into the equity cash market, equities were heavily sold and bonds jumped higher. The up-move of bonds and coincident down-move of equities took less than an hour after which trading was virtually down and both markets traded  sideways into the close. The US 7-year auction went okay, but passed without affecting the broader market. Peripheral yield spreads ended the day broadly unchanged; with two exceptions. First, Greece remains under pressure on collateral fears which threaten to blow up the second bailout (not our base scenario). The FT reports that euro zone finance ministry officials meet with Greece for “non-cash” collateral arrangement as a guarantee to the new bailout. On top, sources report that banks so far  have committed only 50% (vs 90% targeted) of Greece’s debt to the private sector to the bond swap deal crucial to the new rescue package. The IIF was hoping for a deal by mid-August but the Greek government now points to September. Bankers say the reason for the delay is the lack of details surrounding the bond swap deal. This morning, Greece has submitted an inquiry to foreign governments on the debt swap plan, outlining the details for participation. According to the letter, the swap plan is conditional on a 90% take-up by private sector bondholders and Athens now hopes for information from the foreign ministers on aggregate ownership of bonds maturing through 2020. If the condition is not met, Greece will withdraw from the transaction.

Secondly, Ireland keeps outperforming its peers. The 10-year spread dropped 20 bps yesterday and shed 100 bps over the past week to 671 bps, the lowest level since April this year. By the end of June, Irish economic growth data for Q1 2011 were stronger than expected. The first three months of 2011 showed increases both on the comparable quarter of 2010 (+0.1%) and on the preceding three months (+1.3%). However, in July Irish spreads reached record highs in the wake of the mounting euro crisis, but after the EU summit, Irish spreads started plunging and now focus seems to go the strong Irish recovery. Continued export growth contributed to a record €4.08B trade surplus in June (published Tuesday). Unlike Greece and Portugal, Ireland is rapidly regaining competitiveness (export growth, low inflation, low corporate tax rate, willingness of the Irish people), allowing trade to lift its economy out of trouble, despite heavy austerity. By the end of September, Q2 growth data will be published. Whether Ireland will meet the government’s 2% growth target this year remains to be seen, as the global growth slowdown will also affect the Celtic cub.