CySEC Doles Out Fines to UFXMarkets and eToro 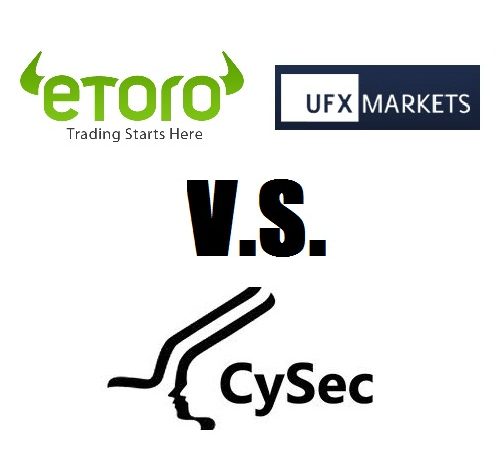 ForexNewsNow – The Cyprus Securities and Exchange Commission has fined two prominent forex brokers due to supposed violations they committed against the trading rules and regulations of the country. The two brokers in question are eToro.com and UFX Markets (Reliantco).

The Cypriot online trading regulator CySEC announced that it fined prominent forex brokers eToro.com and UFX Markets (Reliantco) because they have violated the online trading legislation of the country. The regulator claims that both companies have committed wrongdoings in regards to their organizational structure.

The regulator however refused to elaborate further and point out concretely what these companies have committed. This is because the fines were awarded after the respective companies managed to settle with the regulator.

Settling with the regulator required the companies to pay the fines issued as well as agree to promptly solve the problems that were discovered by CySEC. In exchange, the regulator agreed to withhold the full details about the supposed violations committed by the brokers.

This agreement benefits both parties involved. Cypriot authorities benefit from such a settlement deal because the accused brokers willingly agree to rectify all the problems and violations discovered by the regulator. Brokers benefit because the full details about the offenses they committed will not be released to the public.

Would such deals not be made, brokers might not necessarily comply at first, something that would result in complicated legal cases and a lot of time wasted on different bureaucratic procedures.

Some industry experts however think that CySEC is actually ripping off licensed brokers by making up fictional claims and requiring them to pay a fine in order to avoid a full scale investigation. These experts say that in case brokers refuse to pay the requested fines, CySEC will decide to dig deep into their activities and discover some minor irregularity after which it would blow it out of proportions and as a consequence possibly even reworking the affected broker’s license.

Others also believe that though these settlement agreements the regulator protects fraudulent brokers. They claim that when such a deal is made, the regulator usually discovered something extremely serious such as fraud committed against brokers’ clients. In this case, the regulator requests the broker to pay a relatively minor “fine” in exchange of not revealing the details of the investigation to the public.

However all these scenarios are very unlikely mainly because Cyprus is a full member of the European Union. Also, it would make no sense for CySEC to protect fraudulent brokers by publicly requesting them to pay relatively minor fines in case of serious offenses. If such activities would indeed take place, it would be strange for the regulator to conduct them in public.

After the above mentioned accusations received a lot of attention in the mainstream online trading media, CySEC released a statement addressing the issue. In the statement, the regulator revealed that the country’s laws allow brokers to settle with authorities in order to avoid complicated and time consuming legal hurdles that will end up anyway with the affected brokers being fined.

The regulator explained that despite settling with authorities, brokers are still obliged to address the discovered issues and violations. CySEC will conduct supplementary inspections to make sure that the affected brokers complied with the requests.

Likewise, responding to allegations according to witch the regulator only does these deals to extort brokers, CySEC responded that all the fines cashed in from brokers will not represent income for the regulator but instead will go directly into the Treasury of Cyprus.

About eToro and UFX Markets

eToro is a popular forex social trading network launched in 2007 in Cyprus. Now the company has multiple offices all around the world operating in a large number of countries. The company is mainly focused on technological solutions in regards to social and mirror trading. It claims to have over 35 million trades opened since January 2012.

UFX Markets is a forex broker opened in 2007 and licensed in Cyprus. The broker allows traders to open different types of account based on the they initial deposits they wish to make. UFX Markets allows trading on forex currency pairs, stocks and commodities using the popular MetaTrader 4 software platform.