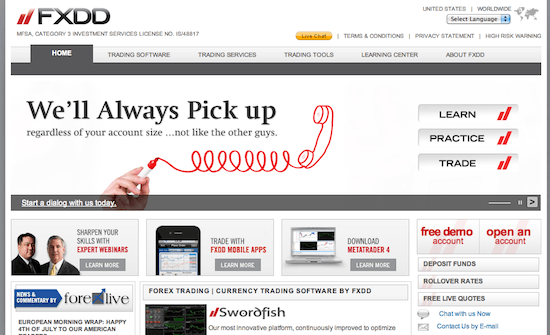 ForexNewsNow – The US National Futures Association (NFA) has just announced that during the past several months it found several rule violations in the investment services conducted by forex broker FXDD. FXDD has been found to have defrauded traders by manipulating slippage settings as well as intentionally misleading the NFA.

The NFA published a document that contains all of the charges raised against the forex provider. The main charge has been revealed to be the usage of asymmetrical price slippage settings that offered FXDD an unfair advantage over its customers.

FXDD has been the member of the NFA since 2009 and, as such, is supposed to follow all of its rules and regulations. The NFA revealed that irregularities regarding the operations conducted by FXDD had already been observed as early as March 2011.

The second main charge against the US forex broker is the fact that the company and its management have supplied the NFA misleading information in order to hide their faulty and fraudulent practices. This is again something that is a very serious offense.

One of the main rules and regulations imposed by the NFA is that no brokers are allowed to use asymmetrical price slippage calculations methods and settings. This is in order to ensure that both the broker and the trader have an equal chance in generating profits.

This works the following way: In order to execute a forex trade, the customer can click on either the bid or offer price associated with the respective trade. If, for example, the ask price of a currency is 1.50 and the trader accepts the transaction, the broker software will check two criteria that need to be fulfilled in order to approve the transaction.

The first check is to see if the trader has enough money in his or her account. The second check is done in order to ensure that the order price of the trade is still within the limits of certain parameters (pips) at the time the trade is about to be finalized. If the price changes during those few seconds beyond the set parameters, then the trade will be cancelled.

FXDD was found to use asymmetrical price slippage settings which involved the following aspects: When FXDD evaluated the price check, if the market moved in the customers’ favor by more than 2 pips, then FXDD would reject the trade.

But in case the market developed in the favor of FXDD with more than 2 pips, the broker did not reject the trade instead it approved it in order to generate more revenues at the expense of unsuspecting traders. This practice is illegal under NFA regulation.

The second main charge against FXDD was the fact that in order to hide its illegal practices it had supplied the NFA with incorrect information. This was uncovered in April 2012 when the NFA requested additional information from FXDD suspecting that the data previously provided was either incomplete or has been tampered with.

The NFA report contains a preliminary estimation regarding the fines and penalties FXDD might receive due to its rule violation. One of the biggest possible penalties the forex broker might receive is an expulsion or suspension from the NFA which would dramatically hurt the company.

Another possibility which is more likely to happen is a huge fine of up to $3.5 million total, based on the cumulative nature of the $250,000 fines to be issued on all the offenses committed by FXDD.