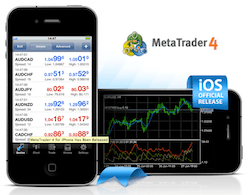 ForexNewsNow – The MetaTrader 4 and 5 software platforms have been for a long time already the top choices for most of the serious forex brokers on the market. This is because these platforms are stable, reliable and extremely easy to use. Now, these platforms are also available in their mobile variant for the iPhone and Android- based devices.

The fact they are available also in a mobile version allows traders to be able to receive quotes, trade and make money wherever they are. Be it on the bus, in the subway, or in a remote area with no computer, the only thing a trader needs is a smartphone with internet access.

The Meta Trader 4 software platform is one of the most used electronic trading platforms. A large percentage of forex brokers on the market use this platform due to its efficient usability, navigation and reliability. Recently MetaQuotes, the company that developed MetaTrader, also developed a mobile MetaTrader 4 app for iPhone and Android devices.

At this moment the MetaTrader 4 mobile platform for iPhone gives traders access to more than 350 iPhone forex brokers on the market. It actually interfaces with more brokers than the MetaTrader 5 app simply because more brokers offer MT4 than MT5 since the former has been around for longer. Like the PC variant, the MT4 iPhone app offers features such as real-time quotes, detailed charts, full trading history, and others.

The navigation of the MetaTrader 4 app is extremely easy, probably even easier than its PC counterpart. At first, users will be asked to log into their accounts. Traders can search through the available servers to locate their existing accounts with forex brokers or create a new forex trading account using the app. After logging in, an interface will appear on the screen presenting various quotes. Users will be given the choice to either start trading or evaluate the historical charts associated with every quote and trading option.

The MetaTrader 4 software platform is also available for Android-based devices. The functionality of the platform is essentially the same as in the case of the iPhone app, but it has some minor visual differences.

One of the biggest differences lies in the field of navigation. The navigational menus and buttons in case of the Android app are somewhat different from the iPhone app, but they function identically. Apart from this, everything is the same in both cases. Users will have access to several hundred Android forex brokers.

MetaTrader 5 was released with the purpose of replacing MetaTrader 4, but so far the majority of the forex brokers on the market still use MetaTrader 4. Still, a lot of brokers have already switched to the new version and it was evident that sooner or later a mobile version of the platform would also be launched.

The MetaTrader 5 iPhone app can be downloaded free of charge. It functions the same way as the MetaTrader 4 mobile software variant but it has a number of changes that are clearly noticeable by users. One of the changes lies in the visual aspect of the app. While essentially both look almost identical, the MetaTrader 5 platform has better defined buttons, graphs and visual elements.

The usability of the Android app is the same as in the case of the MetaTrader iPhone app, with the exception that the available buttons are placed on top of the screen instead of the bottom. The Android app can also be downloaded free of charge.

Both versions are very stable, secure and offer traders easy navigation and accessibility. The apps give access to more than 350 online forex brokers most of them being some the top names in the industry.

Use the Metatrader 4 mobile app with FXClub

Use the Metatrader 5 mobile app with NordFX