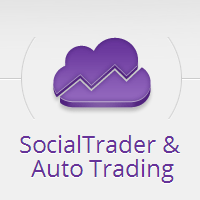 ForexNewsNow – Social trading service provider Tradeo just announced the release of a new and revolutionary social trading platform called SocialTrader. The company promised during the year that it would develop and release such a platform which finally happened late December 2012.

The new platform was developed using latest technology including HTML5 and WebSockets. At this moment it’s probably also one of the best looking platforms which is also reflected on the actual Tradeo website as well. Tradeo is one of the few companies that managed to realize that design does matter a lot.

The SocialTrader platform comes with personalized and real-time price streaming as well as full trading capabilities. The platform supports the integration of both the popular MetaTrader 4 platform and Act Trader platform. Since its focus is on social trading, it also includes a real-time and highly advanced social charting. The advanced charts allow traders to share various data with each other including open positions and orders placed.

The platform also makes it possible for traders to collaborate and communicate with each other in real time with the click of a button. Traders will be able to execute trades directly from opened charts without having to open a distinct trading window and interface.

Social feeds, news, broadcasts and posts made by other traders are incorporated into the new platform allowing traders to check latest trends and interact with each other in real-time. This is one of the reasons why Tradeo is often called “the Facebook of online trading”. The new SocialTrader platform definitely lives up to this nickname.

Tradeo revealed that all of its older services and its social trading network will continue to live on after the release of the new platform. The new platform is the extension of the services previously offered by the company but it’s also an upgrade considering that it also allows actual trading.

Tradeo CEO Jonathan Adest explained that after user feedback he and his company realized that a standalone social trading network is not enough to satisfy traders’ needs. As such, the company decided to develop a social trading platform that includes actual trading as well. Tradeo is the first company to achieve this.

CEO Adest added that his company will continue to work on the release of new trading technology and tools. Likewise, the company intends to collaborate with brokers from all around the globe to be able to develop the best quality services.

Now with the release of the new SocialTrader the popularity of the company and its services is expected to grow. While it’s still a relatively new company, Tradeo appears to have the chance to become one of the largest forces on the trading market sometimes not far in the future.