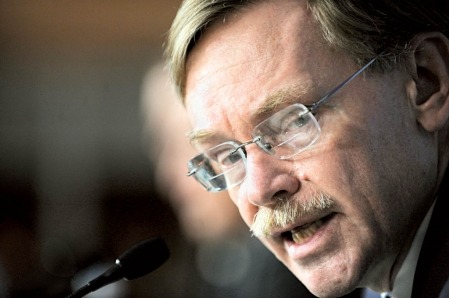 Following a speech to the Asia Society in Sydney, Zoellick told reporters “I think we are entering a new danger zone…I think that confidence in economic leadership has been slipping and it will be important that the primary economic actors take steps both short and long term to restore that.”

Investor confidence has fallen in recent weeks after the deadlock in Congress led the US government to the edge of default. As a result of the crisis, credit rating agency Standard & Poor’s cut the credit rating of the US, which still holds the titl of the largest economy in the world. In addition the debt crisis in Europe has triggered speculation that the global recovery will weaken, contributing to a decline of 12 percent in the MSCI Asia Pacific over the past three weeks.

Zoellick said the U.S. had contributed to the drop in confidence in the markets due to the lengthy debates in Congress on measures to ensure that the country did not default on its debt.

“Unless the economic leadership gets ahead of the problem in its different dimensions then you’ll see the lack of confidence will lead it to spread, and it will spread to players that should otherwise be able to sustain their policies and get beyond the crisis,” said the World Bank President, who has headed the 187-member bank since July 2007.

Last week Italian Prime Minister Silvio Berlusconi’s Cabinet approved a deficit cut of 45.5 billion Euros ($65 billion) in an effort to balance the budget and to convince investors that Italy is capable of handling the region’s second-biggest debt

“The fact that Italy is now about taking the most basic policies for growth is important, but must be followed through,” said Zoellick, a former US Trade Representative and former Deputy Secretary of State.

Spanish Socialist Prime Minister Jose Luis Rodriguez Zapatero has called two special meetings of the Cabinet for August 19 and August 26 to take steps to ensure that the country will meet its deficit target this year. The government is working to encourage temporary contracts to help the labor market and change the timing of tax calendar for large companies to increase tax revenues by 2.5 billion euros in 2011.

Zoellick encouraged Spain’s attempts at reforms saying “I think Spain under Zapatero has actually moved ahead and that’s one reason why Spain has been able to sustain this. But ultimately, if some of the countries such as Greece and Portugal are unable to show the prospects for growth, then the problem will persist,”

The World Bank President added that the internal debate in the US has shaken global market confidence, “Frankly, markets are used to the United States playing a key role in the economic system and leadership and so when they saw the ‘sturm und drang’ in Congress and with the executive, it made them uncertain about, ‘well does the United States really know where it’s going? Or is it going to get there?'”

Zoellick added that he expects everyone to move towards a system of multiple reserve currency, the U.S. dollar will likely remain the primary global currency despite rumours of the Chinese Yuan taking primacy.

Turning to the second largest economy in the world, Zoellick said China’s recent numbers for inflation may have influenced policy makers to allow the Yuan to appreciate in order to combat price pressures.

Zoellick said that Chinese inflation “Probably tipped the balance internally, the idea that the currency appreciation is a way that you can counter inflation,” He said an inflation rate in China of 8 percent to 10 percent would be “seen as a very serious problem” and have the potential to disrupt the nation’s leadership transition.

China’s inflation accelerated to the fastest pace in three years in July, as consumer prices climbed 6.5 percent from a year earlier on surging food costs.