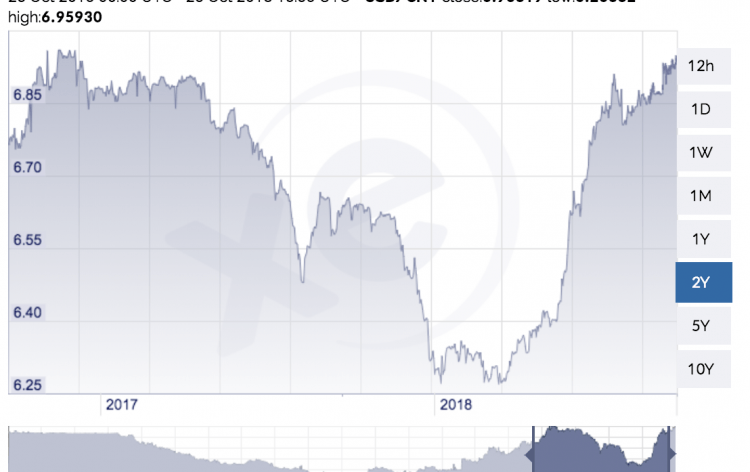 In the non-stop world of currency exchange, there have been two developments which have defined 2018 so far. These are the rapidly strengthening US dollar, fuelled by a booming economy which looks set to deliver domestic growth of close to 4% this year, and of course, the respective decline of the Chinese currency, the Yuan.

The Fall of the Yuan

The Yuan’s depreciation in itself may not have attracted too much attention, given that the exact same thing is happening in relation to the dollar elsewhere. Emerging economies such as Argentina, Mexico and, most punishingly, Turkey, have all seen the value of their respective currencies nosedive while the greenback has strengthened to levels not seen in years. This is largely due to the fact that these countries have large amounts of foreign debt which must be repaid in dollars, meaning that a strong dollar makes these debts much more expensive to service.

However, the Chinese economy is nowhere near as vulnerable to foreign debt and has some of the largest cash reserves of any country in the world, which is what has made the fall of the Yuan all the more interesting this year. Unlike the other countries mentioned, China is currently in the unenviable situation of being embroiled in a heated trade war with the US, which has slapped tariffs of up to 25% on Chinese imports, and looks set to increase this further before the end of the year. This, in turn, has eroded the value of the Yuan, which has fallen 9% against the dollar over the over the course of 2018.

This, however, is not the full story. While the Yuan has indeed fallen significantly against the dollar, currency observers will notice that it has not done so against other major currencies such as the Euro, against which only a 2% drop has been observed. The Yuan has also stabilized and looks set to regain lost ground in the year ahead, in spite of previous forecasts to the contrary.

This is because the Chinese government has been pouring unprecedented resources and efforts into keeping the Yuan afloat, in order to avoid any domestic turmoil that could undermine the country’s already sluggish growth.

To understand this response, a little bit more context is required. The centrally planned economy of China has long been vulnerable to investors betting against the Yuan. The rises and falls of this currency have allowed traders using NFA-approved platforms to profit from the fall in the value of the Yuan when trading online and through other channels.

While this is good news for the bank balances of brokers and investors, it’s usually bad news for the economies involved. People pouring big money into betting against the Yuan and then selling to make a big profit has the effect of undermining the value of that currency even further. That’s why the Chinese government is working so hard to prop up the Yuan, creating incentives to stop money from leaving the country and keep the value of their currency stable against hostile actions from the US.

Propping up the Yuan

The Fed has been toying with the idea of branding China a currency manipulator for a while now, a label which could have deep and lasting consequences on the Chinese economy. The fact that China is dipping deep into their cash reserves and imposing limited capital controls does not make the country a currency manipulator. The steps taken to prop up the Yuan are in fact entirely legal, financially sound decisions that have stopped the currency eroding further and kept it relatively stable against other major currencies.

China quite clearly sees a trade war with no near end in sight, compounded by an American economy that looks set to continue growing apace, so they’ve planned for the long term. Reserves have been built up considerably since the Chinese financial crisis of 2015, and the central bank has signed off on a comprehensive stability strategy.

While it’s possible that the Yuan will indeed decline further, it’s clear that these efforts have indeed been working, and that those betting against it may be surprised in the year ahead.