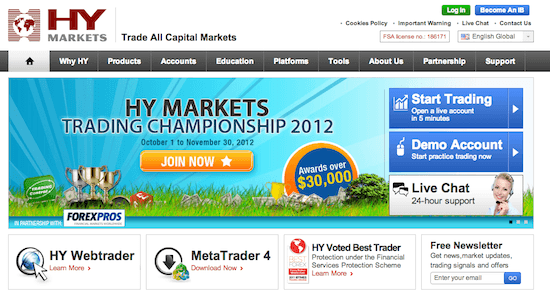 ForexNewsNow  – HYMarkets.com a London-based forex broker, is at this moment organizing a large-scale trading contest that will reward traders with a large variety of prizes. The competition began on October 1st and will last until the end of November. Among the large prize offered at the end of the competition, skilled traders will also be able to win weekly prizes and rewards.

In order to participate in the HY Markets Trading Championship 2012 traders will have to register first. After registering to the competition traders will be awarded with an initial trading capital of $10,000. This money has no actual value and all the profits gained though this money will be voided at the end of the competition.

The competition will take place using the demo account system HYMarkets provides. Traders will be able to use the $10,000 virtual money to trade on forex but also on other types of assets such as oil, natural gas, indices, agricultural products and precious metals.

The competition is built on weekly segments that began on October 1th. During each week, participants will have to use their $10,000 balances to increase their bankrolls as much as possible as well as achieve a high return of investment.

At the end of every weekly segment, traders will be ranked according to the rate of profitability they have achieved. The top ranked trader of the week will receive $1,500 real money trading credits added to his or her account as well as 6 month free access to the broker’s software Trading Central.

The grand prize of the competition is a real money trading account funded with $3,000 trading credits as well as a full year of access to the broker’s software Trading Central product. The big winner will be the person who achieves the highest return of investment during the 2 months the competition is active.

At this moment the first ranking trader managed to turn his or her $10,000 initial balance into $84075.26. This means a return of investment of 740%. This is followed by another trader who achieved a rate of 537%. Both these results were achieved during the first week of the competition.

The new and exciting HY Markets Trading Championship allows traders to test their skills against each other and win awesome prizes. The competition is also a great way for new traders to begin their career in the world of online trading.