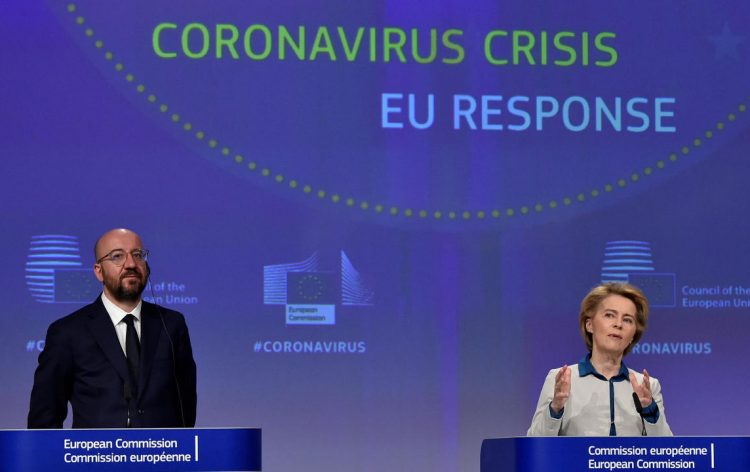 Leaders of the EU have finally reached a historic agreement on Tuesday morning. The agreement is about €750bn coronavirus pandemic recovery fund, the summit was the longest one in nearly two decades. It only stands several minutes less than the one in Nice 20 years go, when the leaders of the EU discussed the enlargement of the union.

For five long days, 27 exhausted heads of the EU states and governments finally approved an agreement. With this agreement, the EU will jointly borrow debt to be disbursed through grandson a level never seen before. This all happens in an economic downturn not seen since the Great Depression. The end of the long and tiring discussions was announced by the President of the European council, Charles Michel, who wrote on Twitter a single word – “Deal!”

The discussions during the past five days have been about both, a recovery package and the European budget for 2021-2027. Michel calls this decision a strong, and the ‘right deal for Europe right now’. The deal that was reached has huge historic importance, as many have thought that the different parties would not be able to find a single solution.

As a result of the deal, the Euro has risen against the US dollar and stands at $1,145. Macron, president of France, called this decision a historic day for Europe. The president of the European Commission, Ursula von der Leyen, noted that the talks that have lasted longer than 90 hours were worth it, and after this decision, skeptics can no longer accuse EU of doing ‘too little, too late’.

The deal and its importance

The hard-won deal talks challenged north against south and east against the west as governments negotiated over both the seven-year budget of the European Union and a one-off economic stimulus that has great importance for many EU states, especially for those that were most affected by the virus.

The summit started on Friday morning and lasted until early Tuesday. It was so prolonged that two leaders of Europe, Xavier Bettel of Luxembourg and Micheál Martin of Ireland briefly went back home before coming back to Brussels for further discussions.

Given initial resistance from the so-called frugal states of the Netherlands, Austria, Sweden, and Denmark, the consensus was eventually reached to disburse large amounts of the money in the form of non-repayable grants to countries most impacted by the coronavirus pandemic, following a final 5:15 am session of the 27 leaders on Tuesday morning.

The agreement followed Michel ‘s new plan for the EU to pay out €390 billion in grants and €360 billion in the form of loans from this very important stimulus fund. The so-called frugal states were originally fighting to reduce the initial €500bn in grants to €350bn. This was followed by the very evident anger of Germany’s leader, Angela Merkel, and President Macron of France.

The heated debates at one point lead to Giuseppe Conte, Italy’s Prime Minister, warning the Dutch leader, Mark Rutte, who was one of the leaders on fighting for the reduction of the grants, that he might have become a hero in his home country but he would have to be faced being blamed by the rest of the EU for his “lack of solidarity”.

However, with the help of Michel’s new plan, which came into the discussion after hours of heated talks, finally recieved the support from the leaders it needed. With the joint press conference with Merkel, Marcon said that this recovery fund is a very much historic change and huge step-forward for Europe.

The final product is a chaotic package of compromises. The so-called frugals will receive significant increases in the rebates they receive on their budget contributions as part of the deal, which very much sounds like when Margaret Thatcher secured discounts on the outsized contributions to the UK ‘s budget in 1984.

As Merkel noted, the fact that Britain left the EU, the environment has become very unbalanced among the remaining members and created a new dynamic. Michel has diluted his original initiative to suspend the disbursement of funds when there are questions regarding either the absence of planned economic progress or the rule of law in a region.

On the rule of law, France, Germany, and other countries needed link to EU funds but the governments of Hungary and Poland, who had recently been suspected of weakening judicial freedom and minority rights, opposed this proposal. The final agreement also shifted in favor of Poland by diluting a call to attach green transformation funds to sign up to the 2050 climate target amid dismay by environmental groups and senior MEPs.

Poland, which is projected to receive €37 billion in grants from the program, and theoretically billions more from a “just transition fund” to switch away from energy, is the only EU member state that fails to meet the 2050 pledge.

In addition to negotiating the scale of the relief fund for countries affected hardest by the coronavirus pandemic, politicians have had to negotiate about the EU’s seven-year budget, which is scheduled to launch next year. Michel has negotiated a €1.074tn deal on EU projects, but the members will encounter significant resistance in the European Parliament when it is taken to the chamber for the approval of MEPs.

What were the leaders really arguing about and who took which side?

The EU leaders were discussing the ways of using the €750bn coronavirus recovery plan, which is intended to pull the EU out of this historic recession. Other than this, the sides also discussed the seven-year budget. One of the biggest questions was how should the countries be able to access the grants. France and Germany, with huge support from the European Commission, originally intended to propose €500bn in grants, and the rest in loans, for the countries most affected by the coronavirus.

Leaders of France and Germany believe that this type of crisis needs serious financial support, this idea was supported by Italy and Spain. These countries also said that they see coronavirus as a test for European solidarity. At the same time, leaders of Austria, Denmark, the Netherlands, and Sweden took a different side, and all of these started the five-day-long discussions.