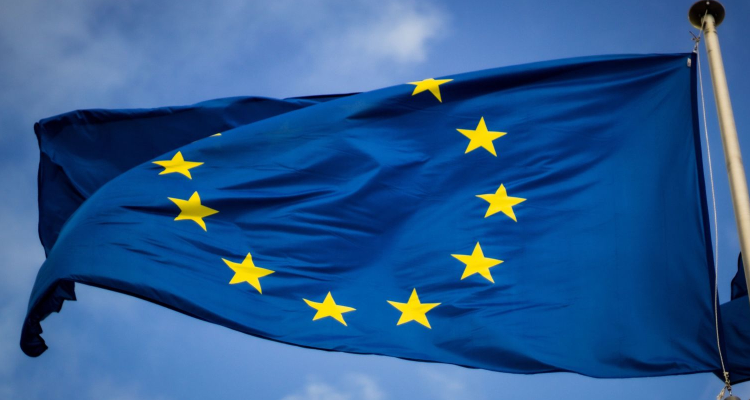 The high inflation following the Covid-19 pandemic and Russia’s invasion of Ukraine has placed global currencies under severe pressure. The ECB was slow in its response to high inflation and lagged behind the Federal Reserve of the US in raising interest rates. This lax approach caused the pair to swing in favor of the USD.

Declining growth and negative outlook have played into recession fears and investors are seeking to hold their funds in the world reserve USD rather than the euro.

The euro has fallen by more than 12% against the dollar since the start of 2022. The bearish sentiment towards the eurozone currency has brought the pair towards parity.

The observable general trend for EUR/USD was a steady decline throughout 2022, which culminated in parity towards the latter half of August 2022.

Why is the euro tanking?

The war between Ukraine and Russia has harmed European economies. The health of the eurozone economy has been called into question after subpar macroeconomic data across the union. Yearly inflation hit a record high of 8.9% in July 2022. While the pandemic had placed member countries under strenuous circumstances, rising energy prices ramped up recession fears even further.

Russia’s ability to cut oil exports to Germany would put the German manufacturing sector under serious strain. While this has not yet happened, the concerns are unlikely to die down anytime soon.

The euro has fallen from almost 1.19 against the dollar to briefly trading at 0.99 in August. 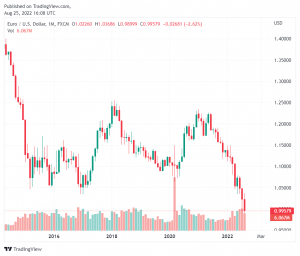 Due to ongoing uncertainty, economic growth projections have reduced across the European Union – down to 1.5% for 2023 from 2.7% in 2022.

The political uncertainty in Italy is not helping matters either. The resignation of PM Mario Draghi and the call for new elections in September will likely place further pressure on the euro.

ECB president Christine Lagarde had hinted toward an interest rate hike coming in September. Due to the ECB’s late response, a more aggressive raise is more likely. The chances of such a rise leading to an EU recession are hurting demand for the euro.

Carsten Brzeski of ING noted the closing window of opportunity to raise interest rates amid increasing commodity prices. Brzeski also added that an increase of 50 bps was the more likely outcome before winter.

The increased interest rates are unlikely to have a significant impact on the EU economy in the short term. What was expected to be a long-term normalization of interest rates now seems like a short-term opportunity to save face for the ECB.

The Federal Reserve is driving the EUR/USD

On the other side of the spectrum, the Federal Reserve has been much more decisive in its goal of tackling inflation. The Fed is on track to achieving its 4.00% interest rate target while gaining from the support of USD bulls. The hawkish decision of the Fed is swinging the EUR/USD pair in favor of the reserve currency.

The minutes from the Jackson Hole symposium on Friday are likely to have a major effect on the pair in the short run. Expectations for the meeting are split between rate hikes of 0.5 and 0.75%.

The Fed was quick to start raising interest rates, which gave the dollar a leg up against other major currencies. The safe-haven greenback had been gaining ground against the euro since the start of the year.

This aggressive inflation stance has brought faith back into the markets and USD bulls dragged EUR/USD briefly below the parity line. This drop was the lowest point for the euro for two decades.

Where does the euro go from here?

The short-term stance of EUR/USD depends on the Federal Reserve’s meeting on Friday. If Jerome Powell presents a lower-than-expected rate hike and guidance, this could be a lifeline for the euro.

However, the likelihood of the Fed switching to a sheepish stance seems slim and EUR bears are eyeing a further drop-off to 2002 levels of 0.96.

The key issues facing the euro are the inflated energy prices stemming from the war and households are already seeking to tighten their budgets. The economic outlook across the board does not inspire confidence thus far.

Much will depend on the outcome of the war between Ukraine and Russia as well. The EU has been vocal in its support of Ukraine and military and humanitarian aid quickly followed suit. The overall political balance of the continent will be essential for the economic turnaround of the EU.

EU member states are trying to adopt new policies to curb the looming energy crisis. Experts are expecting a tough winter in Europe, and governments are considering reopening coal-powered plants to meet demand. The availability of Russian hydrocarbons is also likely to play a significant role.

Due to the advantageous position held by the USD, much of the euro’s performance will depend on the Federal Reserve’s strategy, rather than the ECB. All eyes are on Jerome Powell’s meeting on Frida  as investors refrain from large volume trades.