Home - Forex Analysis - Cryptocurrency - Bittrex is about to conduct an Initial Exchange Offering on its platform
Cryptocurrency
by George on March 13th, 2019 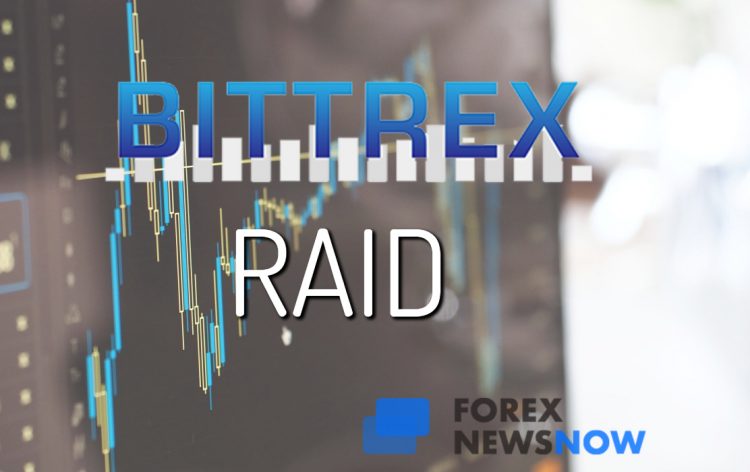 The cryptocurrency community still operates in the bear market, but that isn’t stopping progress. Companies are moving forward with new ideas every single day. It would seem that the day when the cryptocurrency market takes its final shape as a legitimate financial actor in the world is not too far in the future.

Following in the footsteps of Binance, the cryptocurrency exchange Bittrex is now beginning to conduct sales of tokens on its platform. The new tokensale process already has a name and it’s called “Initial Exchange Offering, or IEO in short. This will be done for the blockchain company RAID.

The announcement was made on Monday, March 11. On March 15, Bittrex will perform the Initial Exchange Offering. The exchange will be hosting RAID (XRD) token sale. Raid is a South Korean blockchain startup concerned with gaming data.

The CEO of Binance, Changpend Zhao later remarked on the issue on Twitter and said that he was “Glad to see more joining the club”. It would appear that both Binance and Bittrex management are firm believers in the future of crypto and blockchain in general: 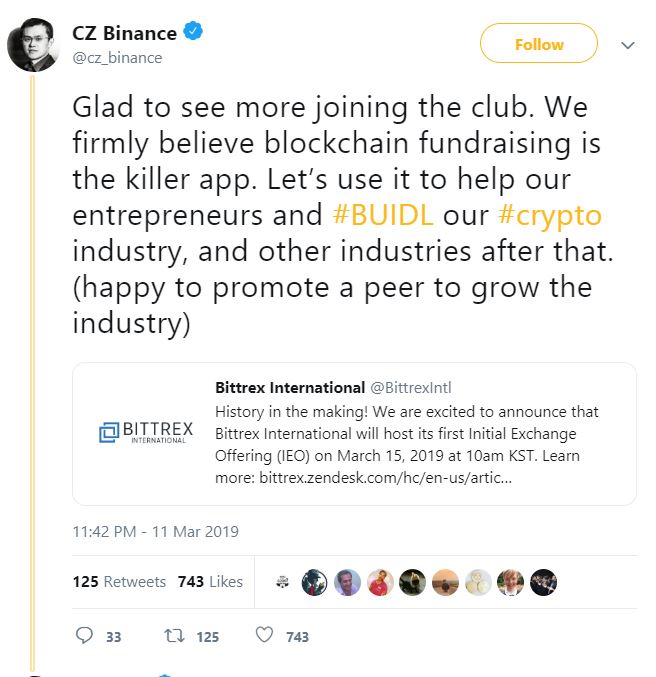 Further down the line, Zhao responded to another comment inquiry about listing the project on Binance and said the following:

“The race to see who lists first is overrated, and short term focused. Exchange users are very liquid. They move around all the time. We just focus on improving our products and services for the long run.”

What will the process entail?

Reportedly, as much as 17 billion XRD have already been transferred to Bittrex vaults and the IEO is expected to raise as much 5.95 million USD. Each of the tokens will cost 10 satoshis for the users and investors willing to participate. The minimum purchase amount will reportedly be 10 USD. The upper limit for the token purchases has been set at 20,000 USD.

How does and IEO differ from an ICO?

An Initial Exchange Offering goes a step further than the Initial Coin Offerings do. An IEO is conducted and controlled by an officially licensed cryptocurrency exchange, whereas an ICO is often manipulated and implies a significantly lower level of security. Over the past few years, ICOs have done a lot of good. They’ve helped jumpstart a very large number of successful, good projects. However, they were also often misused. Over the last few years, ICOs have turned in a full-blown fraudster-infested market. This was making it harder and harder to differentiate between good and fraudulent projects. The community became oversaturated.

IEOs will be hosted by certified and regulated exchanges acting on behalf of those companies, instead of the companies themselves. This creates much more legal leeway. Bittrex is a strong, licensed, player in the world of cryptocurrencies. Companies like that will provide investors and users with an assurance mechanism. IEOs appear to be a necessary step if the cryptocurrency industry is to become fully integrated into the modern world. This is an advanced method of crypto crowdfunding not unlike the regular crowdfunding methods that already exist. IEOs are presented as a necessary step in the evolution of blockchain technology.

The founder of Bittrex, Bill Shihara is extremely confident regarding the security on the exchange. He tried to quiet the worries of the crypto community by issuing the following statement:

“We are committed to increasing adoption and moving the blockchain revolution forward. The ability for projects like RAID to innovate, advance, and promote the gaming industry on our platform is a game changer for all involved,”

At the end of the day, RAID seems to be determined on its path to create a decentralized ecosystem for gaming data exchange. The company is also planning to move forward with a number of other projects and startups within the industry, such a gaming marketing, gaming data analysis, and game selling/distribution platforms. If the company keeps up the level of dedication it has shown lately, it will have a bright future. Its success will reflect on the progress of the overall cryptocurrency community as well.