Home - Features - A Market Where a Dollar Costs More Than a Dollar
Features
by ForexNewsNow Team on November 30th, 2016

A Market Where a Dollar Costs More Than a Dollar

Welcome to Zimbabwe, a country whose leader, Robert Mugabe, Bob for short, has held on to power for more than three decades and counting.

In Zimbabwe, they phase out their domestic currency, the Zimbabwe dollar, known simply as Zim-dollar, as the legal tender. The government made the move to retire the local currency in the height of a hyperinflation that added multiple worthless zeros after the main number in Zim-dollar note, prompting the central bank, the Reserve Bank of Zimbabwe, to issue a 100-trillion bank note to simply transaction. But the 100-trillion currency note only equated to about $5. 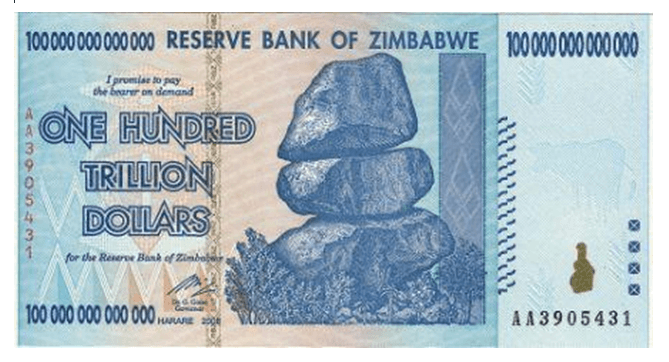 Zimbabwe has been using the greenback as the legal tender since 2009, but the greenback is now in short supply, thanks to uptick in dollar buying after the surprise election of Donald Trump as the 45th president of the U.S.

But the shortage of greenback in Zimbabwe has sparked strong demand for the currency that has seen a dollar bill selling for more than it is worth. In the back street money exchange markets in the capital Harare, buying a $100 dollar bill will set you back $102 – on a good day! Sometimes profiteering in the currency exchange streets of Harare can set you back much more, especially if the money exchanger you approached didn’t wake up in good spirit.

Banks in Zimbabwe are throttling dollar withdrawals. Customers can only withdraw a maximum of $20 from the ATMs a day. But the limited dollar supply from the ATMs has only inspired creativity among Zimbabweans.

If the banks can’t give them the dollars they want, they can play a trick on the banks and the government that has limited daily access to the greenback. Those who have dollars in their bank accounts and cannot dispense enough of it through the ATMs are now staying at the grocery store-fronts to wait for shoppers coming to spend their dollars. Then they strike a conversation with the shoppers just before they enter the store. The talk can be about how the economy is bad state these days and how their ageing president has refused to relinquish power.

Then the conversations would take a business angle. It goes like this: If you are going to the store to spend your dollars, I can pay your shopping bill with my card and you give the cash. Most shoppers have no problem with this because all they want is food to take home to their families and in the evening they can sit in front of the television to watch the latest incident of a government crackdown on political dissidents.

But the government has banned the practice of card holders footing shopping bills for others in exchange for their dollars. Stores have been asked to reject transactions of that nature. The government in Harare sees the practice as further endangering an already frail economy. Hoarding the dollars is seen as aggravating the pain of dollar shortage.

The Reserve Bank of Zimbabwe recently responded to the problem of cash shortage by issuing a bond note, which it said was only a temporary measure. But Zimbabweans don’t trust the government paper because some fear it could lead to the government bringing back its currency, which almost turned into a toilet paper amid the country’s worst inflation crisis.

But the distrust for the government paper and the soaring appetite for the dollar further complicate the picture for Zimbabweans consumers and traders.

But Zimbabwean importers are finding themselves between a rock and a hard place. The suppliers in South Africa they buy from are not only demanding payment in dollar, but they want it in high denominations such as $50 and $100 bills. But high-denomination dollars are even more difficult to come by and money changers in Harare charge a high premium on them. If you are changing smaller dollar units of dollar bills that add up to $3,500 for $50 and $100 denomination notes, then you must be prepared to part with an extra $420 just for the transaction. That means you are buying $3,500 for $3,920.

Will the Zimbabweans go the cryptocurrency way?