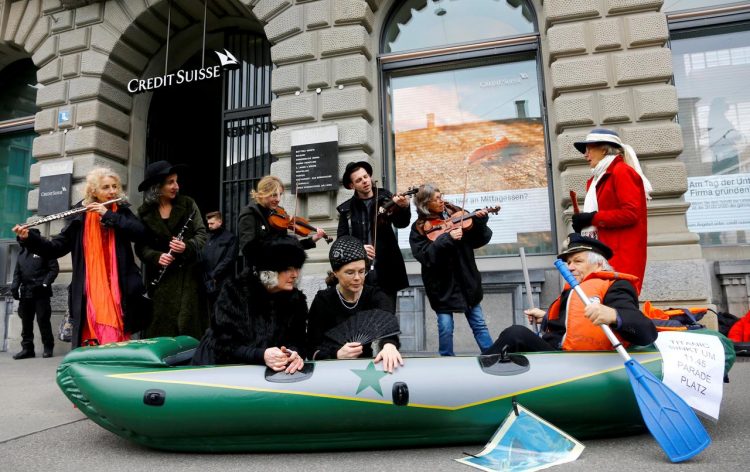 Climate activists in Switzerland urged Credit Suisse to divert the bank from a climate “collision course”.

They gathered outside of Credit Suisse headquarters in a rubber boat and were dressed in Titanic-era costumes.

Protesters demand that the bank divest from fossil fuels and announce a strategy, which will terminate the ongoing financing of the industry.

It is not the first time a Swiss bank gained people’s attention, as a spying scandal on two former executives saw the company’s CEO dismissed from the job. He was replaced by Thomas Gottstein, one of the bank’s most experienced worker.

One of the protesters, Beate Thalmann, compared the extraordinary idea of a boat to the Titanic, noting that the bank is similarly on a course to crash the iceberg of climate chaos.

A man was seen wearing a captain’s hat, and the others were singing Celine Dion’s famous song(My Heart Will Go On) from Titanic with instruments.

Credit Suisse has long been a thing of controversy for protesters due to its staggering financial policies.

A court held in Lausanne last month ruled that the youngsters who organized a tennis sit-in at the bank’s branch were not guilty, because of the threats climate change poses.

On Thursday, Credit Suisse declared to have developed the strategy, which instructs clients to climate-resilient business models, concentrating on sustainable finance and diminishing its carbon footprint.

Moreover, in December it said that the bank would no longer fund new coal-fired power plants.

Climate crisis – a challenge to the world

It is not the first time when climate activists demand immediate action from the government. In the recent period, Swedish activist Greta Thunberg gained worldwide recognition for his efforts, urging everyone to act instantly.

She also faces a lot of criticism, as people think she is very young and does not know many things about the world; however, Thunberg still continues her activities.

Some celebrities including Roger Federer and Russell Crowe also expressed their concerns about the climate crisis, though it seems doubtful we will see any improvements in the following years.