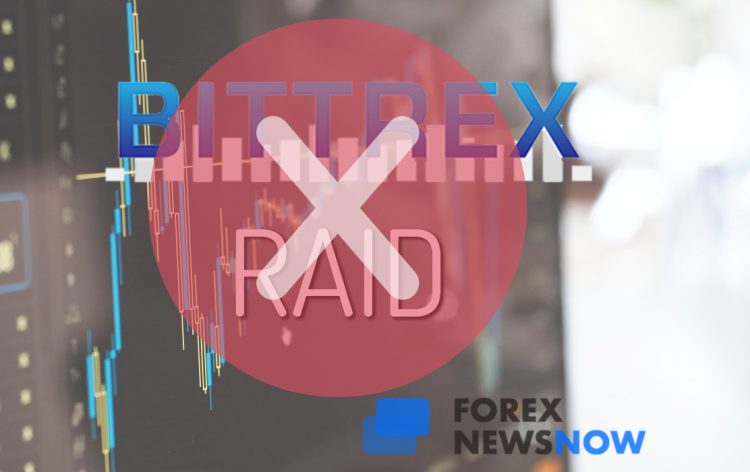 We’ve got some fresh news and they’re not pretty. A couple of days ago we brought you an exciting new story. Bittrex, the cryptocurrency exchange platform was about to conduct the first Initial Exchange in its history. The IEO was supposed to be about XRD, a prospective new token from RAID.  The company was following in the footsteps on Binance who conducted a similar project not so long ago. It was supposed to be a much-needed push for the cryptocurrency market and its legitimacy.

However, things seem to have taken a left turn. Just a few hours ago, the Bittrex exchange made an announcement saying that the project fell through. An investigation revealed that the RAID might very well be a fraud company as opposed to a groundbreaking project. A closer look indicated a lot of inconsistencies with the story and the company in general. These factors must have been taken into account by Bittrex itself, as the exchange took it to Twitter to announce the following:

“Trust and integrity are the most valuable assets of Bittrex International. As a result of significant, last-minute changes with RAID, we have cancelled the IEO offering of the RAID token. We apologize for the inconvenience. We will provide a more complete statement shortly.”

More information on the failed deal shared by Bittrex

The news made waves on the internet. Crypto community was understandably worried about the impact of this event on the already murky state of cryptocurrencies. People wanted to know more. The reputable exchange platform later elaborated on the issue. Bittrex made a lengthy comment on the matters unfolding and stated the following regarding the now-canceled project:

“Bittrex International has cancelled the initial exchange offering (IEO) of the RAID token. We apologize for the inconvenience, but also wanted to provide a more fulsome explanation to our users.

Trust and integrity are our most valuable assets. Part of earning your trust is to be as transparent as possible, so we want to let you know what happened. We decided to cancel the IEO as a result of significant changes in the business status of RAID. Specifically, a few hours ago, OP.GG terminated its strategic partnership with RAID, which was a vital part of the RAID project. When Bittrex International became aware of this significant event, we did not feel that it was in the best interest of our customers to move forward with the IEO.

Bittrex was started with a simple vision: to help advance the blockchain industry by fostering innovation, incubating new and emerging technology, and driving transformative change. As part of this vision, we want our users to know that Bittrex remains vigilant to ensure the integrity of our markets. One of the hardest challenges we face in advancing blockchain adoption is to avoid the rampant fear, uncertainty, and doubt that is everywhere in this industry. When we become aware of significant events, we respond quickly to protect our users.”

Some user were supportive of the company and its efforts to be transparent, while others criticized Bittrex for even allowing the situation to get to this point: 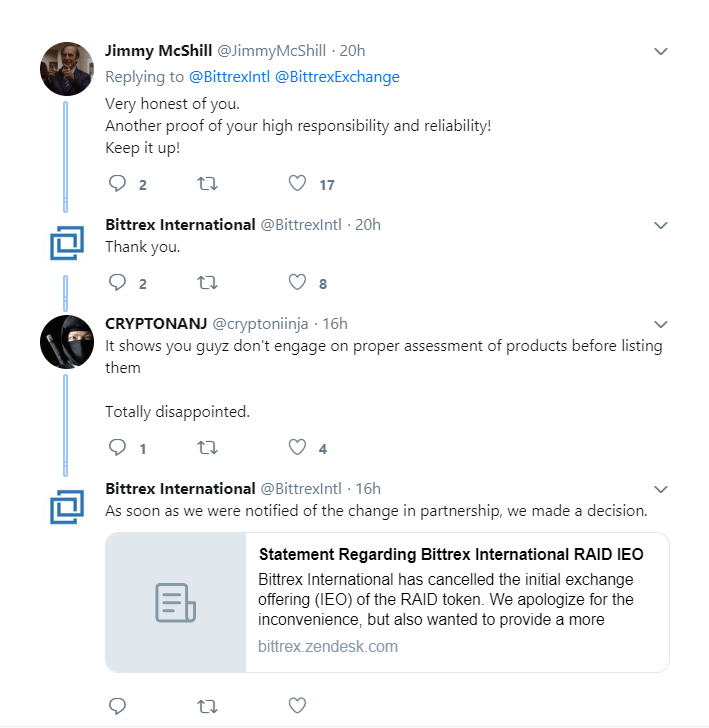 What happened and what does this news signify?

We can’t say much about the significance of this event, in all fairness. Probably the most that could be said is that Bittrex acted in time. The cancelation of the event means that Bittrex probably saved its users from wasting millions of dollars on a scam project. At the same time, if the company wasn’t exposed until after the deal went through, this could have had unfixable ramifications for Bittrex. Right now the platform is among the most trusted and used crypto exchanges in the World. If the scam had succeeded, it would probably be disastrous for them. It would have been a PR catastrophe and even if Bittrex would manage to contain the chaos, their reputation would have been in shambles.

In the future, Bittrex would be well-advised to be more cautious when choosing projects before wasting money and time promoting them. Bittrex announced the project on March 11 and retracted it just a few days later. The partnership with RAID, an allegedly South Korean-based blockchain enterprise may have fallen through, but this doesn’t mean Bittrex is done with IEOs. In all likelihood, the exchange will host another coin in the near future. This time, hopefully, after choosing the project with more diligence.

Was Bittrex about to promote fake tokens from Singapore?

In the complete, detailed reporting by Bittrex, it’s underlined that the XRD tokens would be issued by a company called ONERAID PTE. LTD. The company is supposed to based in Singapore. However, Singapore’s regulatory body ACRA has no records of such an organization.

If you log onto the website of the organization itself, you will find that it has the following to say about their goals and aspirations:

“As a result, our goal is to create the decentralized game data ecosystem where data can be freely exchanged amongst users. Also, by leveraging the game data ecosystem, we are planning to promote and develop new businesses such as advanced game marketing, game data analysis and game distribution platform.”

Sounds legit on the surface, falls apart immediately once you take a closer look. There are records of a couple of companies containing the keyword “Raid”, though. Most of these companies have been virtually inactive for years. One of them reportedly sells alcohol, while another one sells clothing and accessories. None of the companies are in any way, shape or form connected to the blockchain. You can’t google ONERAID PTE, you can’t find them on LinkedIn or in any reputable sources. It would appear that the company is a complete fluke. Therefore, it’s even more puzzling how Bittrex allowed the situation to get so close to becoming a disaster. One would think the company would have been able to spot this scam a mile away.

The situation gets shadier and shadier

The website lists the names of the founders and their employees on the internet. However, you won’t be able to find any of them either on LinkedIn or on Facebook. The supposed co-founder of the company – Cheonwoo Park is no exception. This raises questions – just who were Bittrex even dealing with for this project to go through?!

The only veritable link we have to these individuals is Cheonwoo Park’s company OP.GG. The website of the company reportedly tracks statistics for some of the most popular online games in the world. Games like Overwatch, League of Legends, and PUBG. Park is of South Korean origin reportedly and has been active in the gaming community since he was 12.

Here’s where the situation gets even weirder. If you log on to OP.GG website, you will see that the company states the following in regards to the recent development of events:

“OP.GG has no affiliation with RAID Coin, and there is no economic and technical cooperation with RAID Coin. In addition OP.GG has no intention of developing any blockchain related business utilizing RIOT GAMES data. OP.GG will take all possible legal measures against individuals or organizations disseminating false facts related to this.”

At the same time, XRD.GG had the following to say about the OP.GG company:

“The partnership between RAID and OP.GG has been terminated due to the circumstances of the partner company. OP.GG will also announce regarding this matter. We believe this will have a significant impact on investors’ decision-making. Therefore, after discussing with Bittrex, we will be able to inform you on the details before IEO begins.”

Did XRD change its name several hours before the sale? 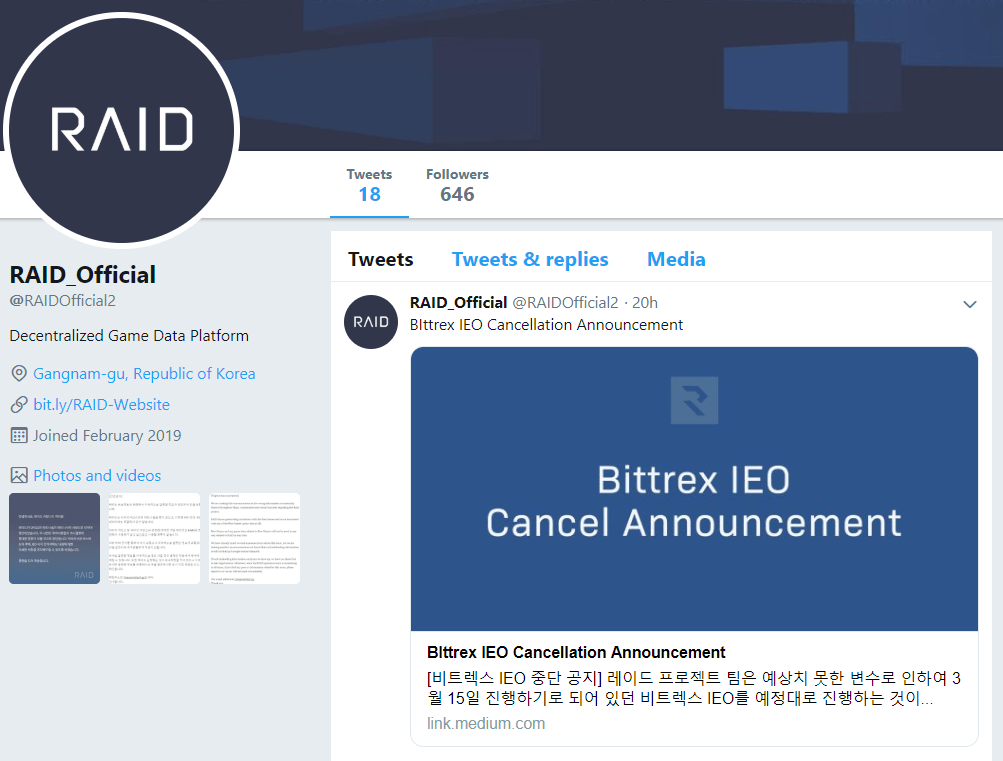 What transpired is pretty ludicrous. There’s no roadmap, no data provided about the future of the price of XRD, no nothing. What’s even stranger is that just 16 hours before the tokensale was scheduled to go live, XRD decided to change its name to RAID. However, the name of their website which is XRD.GG remained virtually unchanged. The whole situation with the company is able to withstand no criticism whatsoever. RAID’s official Twitter account has 646 followers, 18 tweets and the address tag of “RAIDOfficial2”. Meanwhile, the address “RAIDOfficial” belongs to someone called Shrey Sharma who has 5 followers and is pretty much inactive.

Making the situation even more ridiculous is the fact that even simple math doesn’t add up with the tokensale. It was claimed that the ICS (Initial Circulating Supply) of the tokens was 34.5% of the coins. Bittrex, on their part, was holding 17% of them, while Korean stock held 35% of the coins. The listed tokens add up to just 86.5% overall. Which leads to an obvious question: Where’s the 14.5% of the tokens? Which leads to another question we’ve already asked: Just how little due diligence did Bittrex do before agreeing to the tokensale?!

Bottom line and thoughts about Bittrex’s involvement in the events

Was Bittrex in any way involved with the scam before it got out of control and they had to pull the plug on the whole thing? To be honest, that seems unlikely. It seems unlikely simply because Bittrex had much more to lose than gain from the whole ordeal. We don’t find it convincing that the company would take such a risk. Especially with all the prospects that it has in the future. The several million dollars that the tokensale would amass fade in comparison to the money-making potential a leading cryptocurrency exchange broker possesses.

So what happened then? As mentioned, literally nobody from RAID is available for an interview or even simply as someone we can track. All six of the employees listed on the website claim to be of South Korean origin. This includes both founders: Taesung Kim and Cheonwoo Park. We talked about the lack of information about the latter and as you probably figured, there’s even less info available on the former. None of the employees are from or associated with Singapore. Nobody from the company is answering emails or trying to contact the press/public in any way.

ForexNewsNow will try to update you as soon as the new developments start to roll in.