Home - Top Stories - Brent Stabilizes After Testing the Highest Level Since the Beginning of the Year
Top Stories
by Martin on October 12th, 2021 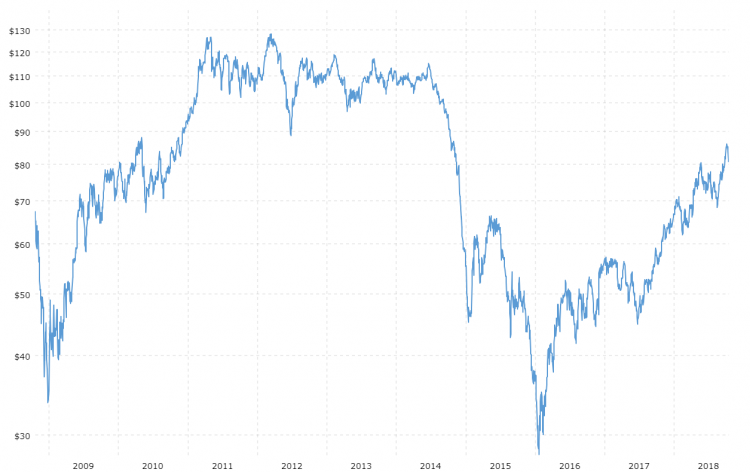 Yesterday a barrel of Brent crude rose by $2.0, reaching its highest level since the beginning of the year, at $84.6. The rise in prices was facilitated by the limited supply on the world market on the eve of winter. By the end of the day, quotations of hydrocarbons retreated to $ 83.65 per barrel, but this was $ 1.26 higher than the final value on Friday. The most pressing question at the moment is whether Brent futures will be able to reach the $86.4 per barrel mark, tested at the beginning of October 2018, again.

It should be reminded that just two months after that, hydrocarbons fell rapidly to less than $60.0 per barrel. Even with the latest changes, which indicate a slight build-up of a long position in Brent and WTI futures, the net volume of bull rates made by speculatively-minded oil market participants is now $35 billion less than in 2018, $25 less than in 2014. , and $ 15 billion less than at the end of 2019. This allows us to conclude that the cumulative long position has not reached the maximum levels at all, and the price correction will in any case be limited in scope and duration.

We also note that in 2018, some traders simultaneously gambled on the rise in oil prices (WTI) and opened short positions in natural gas (Henry Hub). This was due to the fact that such players expected an increase in spreads between the two energy carriers in conditions when a warm winter and an increase in gas production in the United States were predicted, and the White House promised to achieve an end to the supply of Iranian oil to the world market. It is noteworthy that Saudi Arabia increased production to 11.1 million barrels in November 2018. per day in order to prevent a shortage of supply on the market.

What is the Main Difference?

The main difference between the current situation and 2018 is the volume of oil production in the United States. In the period between March and July, production was about 11.3 mln bbl/d, and we expect that by the end of the year it will reach 11.4 mln bbl/d. Recall that in 2018, US oil production in the fourth quarter was 1 million barrels per day higher than in the first. By 2022, when production growth is expected to accelerate in the United States, global oil demand is likely to ncrease by 1.5 million barrels per day. Accordingly only a sharp drop in demand could prevent oil prices from rising to the 2018 high of $86.4/bbl.

Brent oil quotes dropped below $84 / bbl this morning. against the background of the correction in the stock market, which was caused by fears of high inflation due to the rise in energy prices. On Tuesday, investors await the ZEW economic sentiment index for the eurozone for October, and important fundamental data on the oil market will be published on Wednesday. We believe that oil prices may test the $ 84.6 / bbl level again, but are unlikely to rise higher in the absence of significant growth catalysts.