Home - Top Stories - Days Old Cryptocurrency Threatens To Give Bitcoin A Run For Its Value
Top Stories
by ForexNewsNow Team on November 16th, 2016

If cryptocurrency scene has been heating up, then Zcash (ZES) has just added more fuel to the flames. Zcash is the latest altcoin on the market and it is threatening to turn tables on older rivals. Sticking to the trend of new digital currencies coming to market, Zcash is comparing itself with Bitcoin (BTC).

Zcash Electric Coin Company, the developer of Zcash cryptocurrency, says the new digital currency is the solution to the problems Bitcoin and most other altcoins before it have failed to nail. One of those problems is privacy. Zcash claims to offer far greater transaction privacy than Bitcoin and it is hoping to rally on that advantage to bolster its value in the increasingly crowding cryptocurrency market.

In a world where people are increasingly mindful of their online privacy, especially in the wake of high profile data breaches at large companies like Yahoo (YHOO) and Target (TGT), privacy claims quickly grab the attention. Zcash says transactions on its network are beyond tracing. You can’t see the details of the sender, recipient and amount moved through Zcash network. As such, Zcash lightly puts it that if Bitcoin has been considered the http of virtual currency, then it is the https. Litecoin (LTC), another altcoin, also claims to be silver if Bitcoin is considered gold.

Zcash says its transactions are recorded and published on a blockchain, just like Bitcoin, except that the network has added privacy features.

Zcash, which is only days old and already commands a strong value of more than $100, is a brainchild of a team of internationally-renowned cryptography experts. The team used an advanced cryptographic technique known as zero-knowledge proof construction called (zk-SNARK) to shield the digital currency’s network and ensure its advanced privacy. Besides shielding transaction details, Zcash also says nobody can cheat or steal on its network, partly because no information is given away that could be used to track a transaction party. 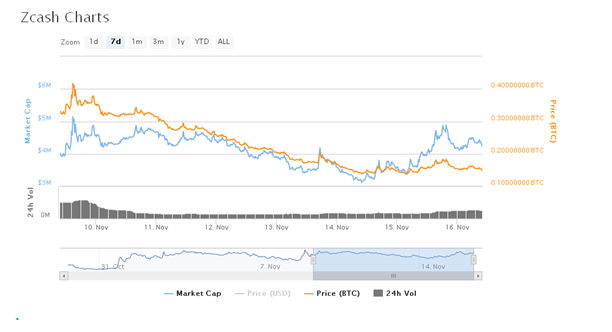 Zcash yields stake for outside investors

Zcash earlier this year raised additional capital by selling a stake in the company to outside investors who injected $2 million into the business. Zcash has a market cap of about $4.4 million and about 39,893 units of the currency are in circulation.

Bitcoin, which is now trading north of $713 against the greenback, boasts the highest valuation in the cryptocurrency world. Bitcoin has a market cap of more than $11.4 billion. Ethereum (ETH), another successful altcoin, commands a price of about $10 against the dollar and market valuation of more than $884 million.

There are more than 700 cryptocurrencies in circulation today. The coming of more digital currencies is breeding competition but also helping the industry grow. Investors wary of the outcome of the U.S. presidential election last week bid up altoins as a hedge against economic uncertainties. For a growing number of investors, digital money like Zcash, Bitcoin, Peercoin (PPC) and Litecoin are seen as alternative safe haven assets to gold and other commodities.

Click here to cancel reply.
BTC Hodler
Lol, are you serious ? At the rate Zcash is crashing, in a week people will have to pay you to take it off our hands ! There is only one Crypto-Currency worth considering, and that is Bitcoin.
Reply
erik
one group actually can cheat on zcash's network. because of the way the zero-knowledge proof is designed, it's possible for the original developers to have held on to keys that can be used to create zcash out of thin air. it's unlikely, and there was some effot to prevent this. but the effort was, imo, minimal, involving a small handful of people who knew each other beforehand.
Reply
banner