Home - Top Stories - Bitcoin’s biggest mystery soon to be revealed? Who is Satoshi?!
Top Stories
by Mariami on May 8th, 2019

Bitcoin’s biggest mystery soon to be revealed? Who is Satoshi?! 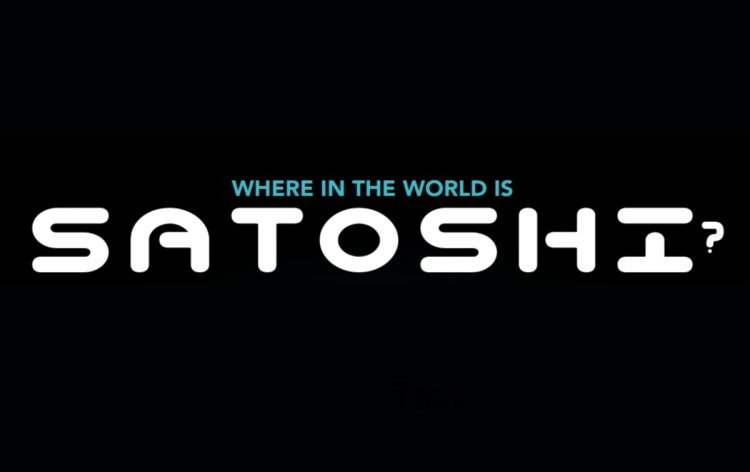 Bitcoin is one of the greatest mysteries of our times. More precisely what is it, how it was made and how does it work. We have dived into the world of cryptocurrencies and many have made a fortune thanks to the rise of Bitcoin. Trading with Bitcoin and other currencies, checking the prices and seeing the new digital coins being developed has become a daily activity for many. But how much do we really know about Bitcoin? There are lots of unanswered questions and only one person capable of answering them – Satoshi Nakamoto. Who is Satoshi? This is by far the biggest mystery.
We refer to him as a person but is “he” really a person? a group of people? an underground entity of mavericks? The question is about to be answered. GoSatoshi.com and Twitter account of GoSatoshi promise the reveal of the identity behind the creator of Bitcoin at 15:50 GMT on May 14th. What can we expect?

The appearance of Satoshi

Where in the world is Satoshi? Asks the website curious visitors and offers them to sign up for the live unveiling. The website also shows the countdown until the greatest reveal which is in six days only. More can be found on Twitter account. Satoshi describes himself, herself or maybe themselves as an “inventor, developer, futurist, Cryptoenthusiast and blockchain evangelist.” And in case you thought it is Craig Wright, you are wrong as the description continues with words”Not Craig Wright.”

Satoshi Twitter and Website promises to unmask but Satoshi states “Unmask me if you can” mentioning that he/she “May Know @Officialmcafee” pointing out to the recent claim of McAfee to know  Satoshi Nakamoto.

“inventor, developer, futurist, Cryptoenthusiast and blockchain evangelist” and a geek?

To put simply it is entertaining to see Satoshi’s Tweets. Satoshi made its first appearance to the public with the picture stating “Will the real Satoshi Please stand up” on April 24. The first appearance has stayed somewhat unnoticed by the public, however as the date of a great reveal comes closer the interest is increasing. The first proper tweet of Satoshi states it is #Ageofthegeek making an Endgame reference. The tweet was followed by the inspirational quote about the power of vision and belief. Satoshi also called out media website stating that the creator of Bitcoin mines Bitcoin cash. The tweet reads “why mine BCH when you have over 900K BTC?.” Last but not least apparently Satoshi reads Harry Potter as he made the following Tweet: “In between studying cryptographic algorithms and systems theory, I read a little Harry Potter.” 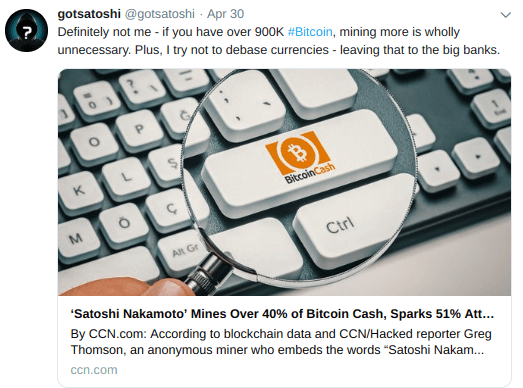 Will we ever know who Satoshi is?

There are three main theories around revealing the identity of Satoshi Nakamoto. Some suggest that it is a part of PR for Consensus 2019 as the countdown finishes in the middle of the second day of the conference. However, it looks too messy for a well thought PR campaign.

Others suggest it is McAfee which claimed to know Satoshi one month ago. At that time McAfee stated that it would reveal the identity of Satoshi before he would do it himself (If anything McAfee seems to be sure in the gender of the Bitcoin creator) However, some time ago McAfee withdrew its offer about revealing Satoshi’s identity. The reason could have been the legal matters if so GoSatoshi might be a good way for McAfee to do the unveil without saying anything personally.

The last theory suggests it is really the time to see the person behind Satoshi Nakamoto, the most mysterious person of our times. Right now we have nothing more to do than wait for six more days and hope it is not a part of the ill PR campaign.