Home - Forex Analysis - Cryptocurrency - What is the reason behind BTC growth in February?
Cryptocurrency
by ForexNewsNow Team on February 9th, 2017

What is the reason behind BTC growth in February?

The price of the bitcoin has been growing exponentially for the last few years. It goes without saying that the asset is very volatile, yet the trend is definitely upward. Even though it might look that the bitcoin is simply growing, it is clear that throughout its history there were quite many contributing factors towards the growth. Today we are going to take a look at the possible reason for the bitcoin growth in the February 2017.

One may think that the bitcoin is mostly used for transactions. Or well, shady transactions. This was, perhaps, true a few years ago. In the modern times, most of the bitcoin volumes have nothing to do with the transactions. Unlike the Forex market, where most of the volumes are purely transactions, cryptocurrencies are mostly used for two main purposes – speculation and gambling. While the first purpose can hardly surprise anyone, many would be amazed to find out that the bitcoin powers up the gambling industry. And it might have been the main contributing factor towards the growth of BTC price in early 2017. 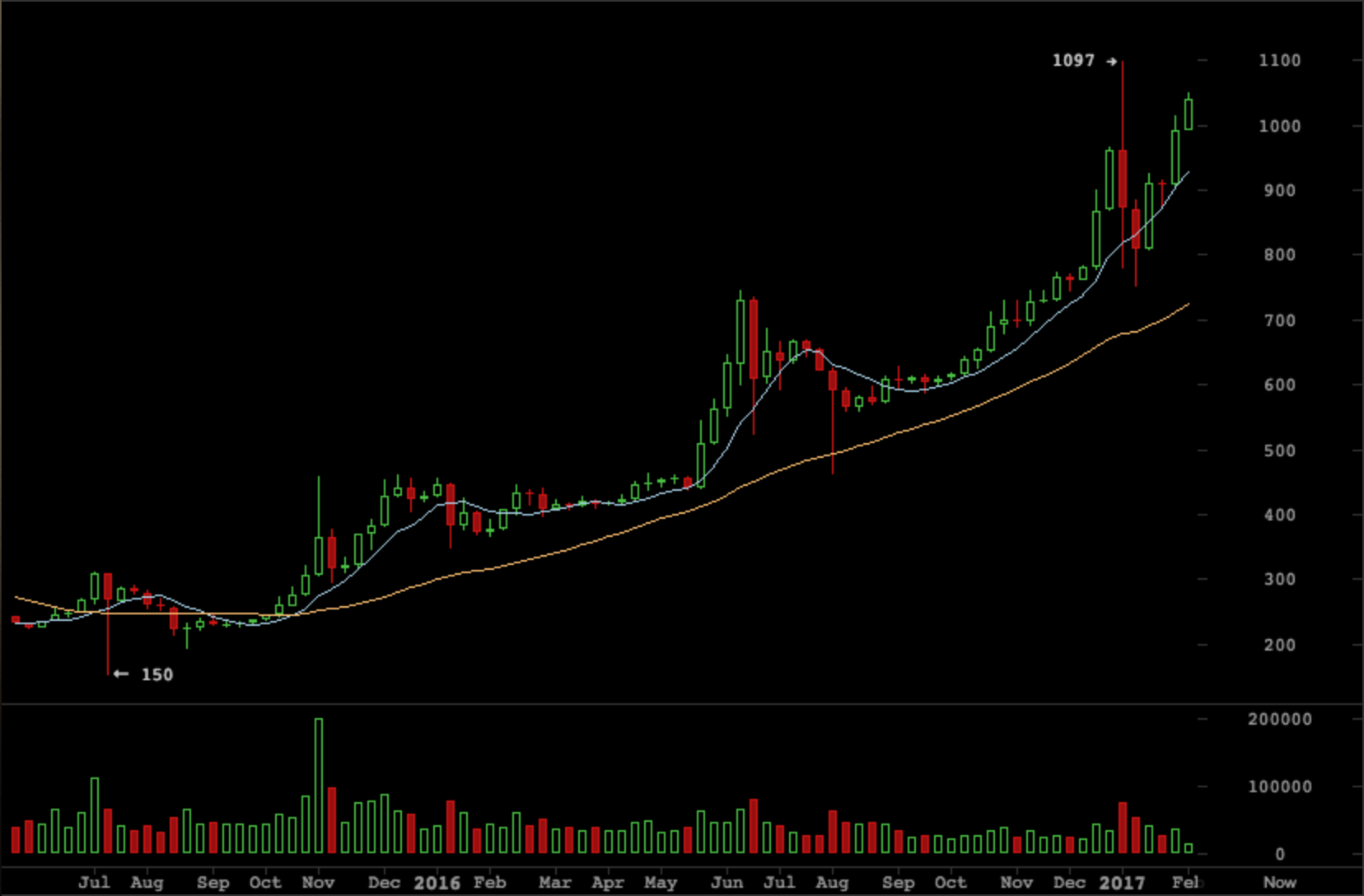 There are dozens of various bitcoin casino websites, and more are appearing every month. Why would the effects been seen just now? The reason is simple. Gambling with bitcoins has just recently became a legal activity. Today, any regulated online casino in the UK and Isle of Man can offer deposits, withdrawals and account balances in the bitcoins. Apart from that, all of the bitcoin casino websites used to operate in a grey area, yet now they are here to stay. This makes the whole industry safer for the customers and for the investors too. Once a bitcoin casino applies for the license, it actually becomes a legitimate business that can attract investors, use the funds to expand its client base and, as a result, generate higher gaming volumes. Clearly, all of the above results in a higher demand for the bitcoins, hence, drives its price up.

Apart from the increased demand, there are technical reasons for the BTC/USD price to go up. 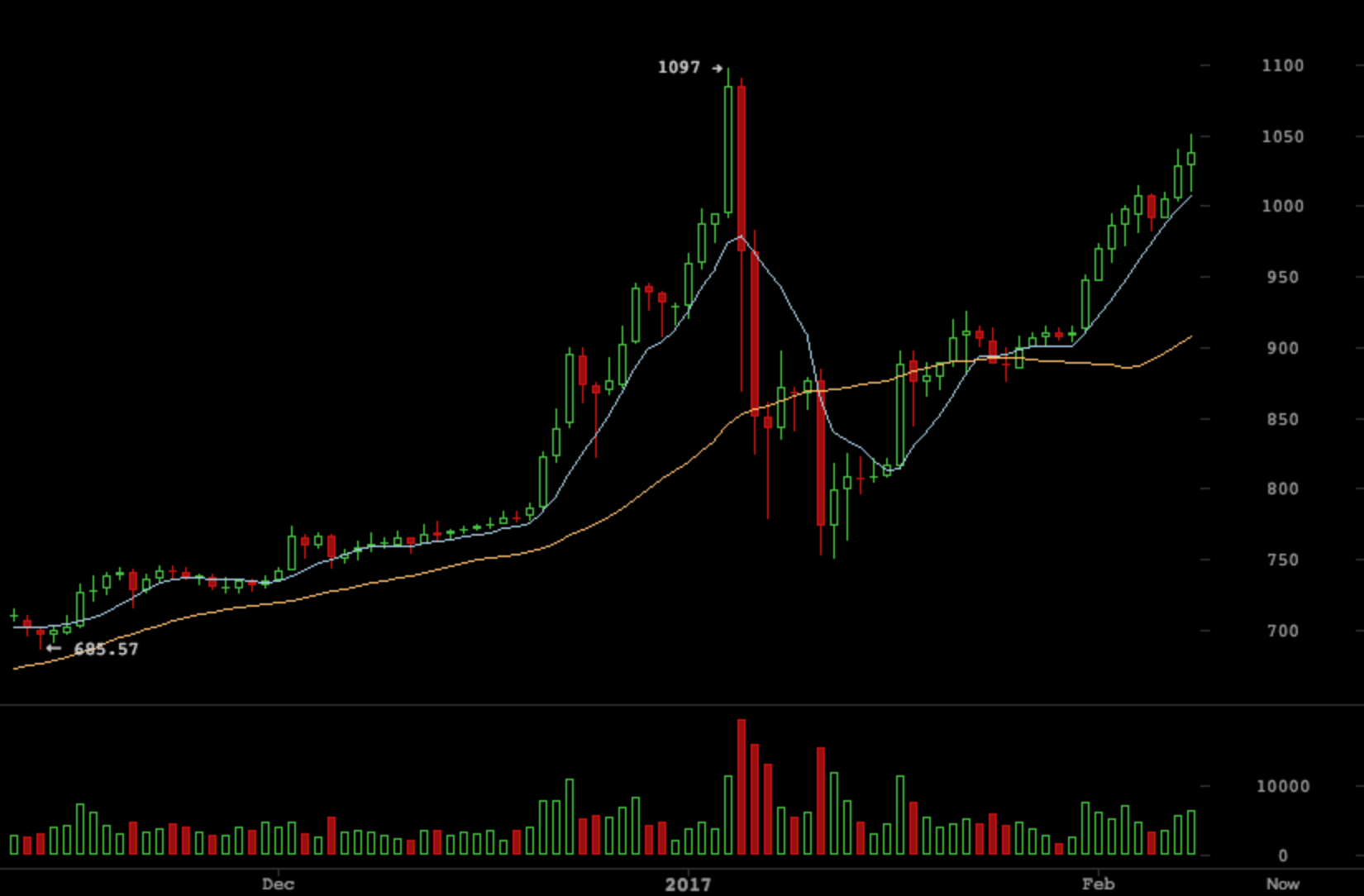 When looking at the weekly chart, we can clearly see that there was a slump in the bitcoin’s price in early and mid-January. Within just two weeks, the price dropped from nearly $1100 to $800 per unit. After a three more weeks, the price went down to $750 per bitcoin. Hence, what we are seeing now is simply an expected correction.

The price of the bitcoin had been often dropping significantly on its highest levels. The main reason behind this is that there are many individuals holding an enormous amount of BTCs and they are cashing out at the highest levels.

What to expect from the bitcoin in February 2017?

Only 9 days have been passed in February and the bitcoin has already came crossed the level of $1000. What to expect in the coming 19 days? When looking at the candles, it is possible to see a similar pattern as in December 2016. However, in the past, the BTC/USD rate was declining with two red candles, while in February it shows a decline of a single candle. This might mean that there will be another bitcoin crash in February 2017, which would result in a smaller downfall. The price is unlikely to break a support of $750 per unit.