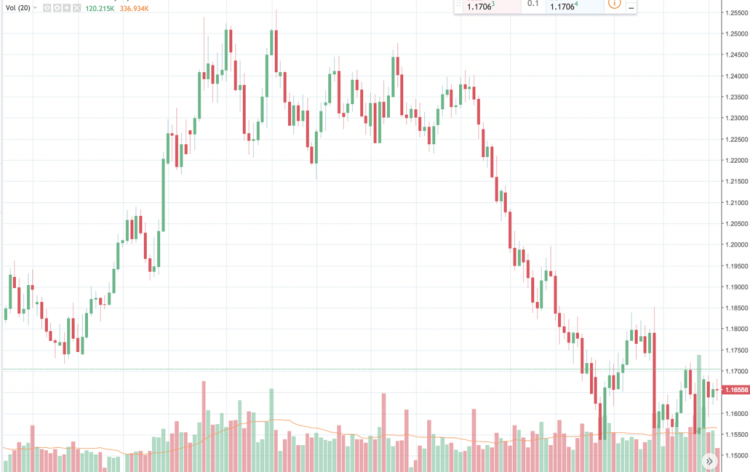 As two of the biggest currencies around the world, the Euro and the United States Dollar typically coincide when it comes to trading and economics. As a result of the popularity of the two currencies, there are minimal arbitrage opportunities, but the currency still remains popular amongst FOREX traders of all levels of experience. So far in 2018, the USD market has been choppy despite maintaining some level of gain but the Euro has experienced a significant level of volatility meaning steady selling pressures on the currency have been maintained. Here, we’re taking a closer look at the selling pressure around the European currency and the impact this can have on global markets.

As a result of Brexit, the cost of Sterling against the Euro and the Dollar is set to slump, and with the impending departure from the EU, UK citizens have been warned to forward purchase their currency if they are heading abroad. With the Euro, there has also been a significant level of volatility, and while it is likely that more countries could be pushed towards the Euro as a result of the UK’s lack of political influence when it came to the non-euro group, the Euro could remain highly fluctuated. The uncertainty of the impact within the EU after Brexit occurs, due to the strong influence that the UK had, could see the Euro begin to face unprecedented selling pressure further questioning the strength of the political body that is the EU.

When the United States’ economy begins to slow and the EU economy grows more rapidly, the Euro becomes stronger against the USD. In recent months, the USD has begun to grow steadily having reached a low point in February 2018. As the USD continues to grow, and the political crisis that is Brexit begins to significantly impact the EU economy over the coming 12 months, there is a lot of potential for the Euro to be weighted with a significant rise in selling pressure.

The US could benefit from a potential free trade agreement with the UK further improving the overall state of the US economy. While there are a number of incidents which have occurred recently which could slow down this progress, we could see the Euro begin to falter significantly compared to the USD once Brexit negotiations are finally concluded.

In recent weeks, there have been a number of fears to the future stability of key European countries such as Germany as a result of their new coalition government, as well as a number of issues in relation to immigration policies. As a result, EUR/USD has faced a sincere amount of pressure, and while these political risks are beginning to ease, it is likely that the selling pressure will continue. While the risk of Germany underpinning the single-currency is set to fade into the background, there are a number of other issues which could see the selling pressure hit the Euro more significantly as the USD remains the central component in a positive outlook.

For example, Italy are not looking to narrow their budget deficit this year, confronting the European Union which is leading to further political instability in the area. Further to this, a weakness in European equities has been highlighted, along with trade war fears set to come into play in the short term. This all points to the USD becoming a key driver for action and while there is a lot of tail wind currently for the currency, with superior economic growth when compared to the rest of the world, one small fluctuation could be disastrous for the EUR/USD.

We’ve already mentioned the fact that Italy have begun to confront the EU in recent months, and the Prime Minister has even hinted at a potential Italian divorce from the Union in June. Key strategists believe that Italy’s existing political climate has already led investors to lose confidence and the country’s politics is also set to keep the Euro volatile. If Italy do decide to leave the Euro, we could see a huge crash and many other countries could be tipped to follow. While immediate concerns about Italy making their mind up to leave has subsided for now, there is a potential for the new coalition government could introduce an element of anti-Euro sentiment in the country mainly as a result of the Eurozone debt crisis the country has been experiencing. With the potential for a further clash later down the line between Italy and Brussels, traders are looking to sell up and move to a currency which is deemed to be more stable. Political pressures are going to be a key factor in the volatility of the Euro and how this is set to impact the markets over the next 12 months.

Selling pressures on the EUR/USD are set to continue as political instability in Europe continues to make an impact. The future of the EU is continually uncertain and the impact of Brexit on the EU economy is still unclear, making the FX Markets increasingly volatile.