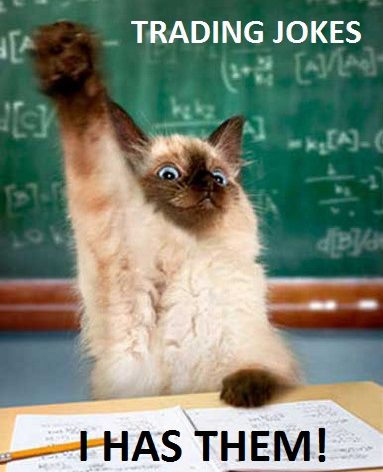 Traders have had a bad reputation of late, and Wall Street has become synonymous with greed and excess. Out of this perspective, there have been many jokes about traders in general. So, on a lighter note, let’s take a look at some of the funniest trading jokes that have been created as well as the comic representations of traders.

On traders’ wealth and materialism

According to Market Watch, almost 30% of all billionaires in the word were in the finance industry – mainly hedge fund managers and investment bankers. The other source of billions is through inheritance and newly founded companies. This and more data shows that trading can be very profitable and traders are usually considered to be wealthy individuals. As such, there are very many jokes about traders’ wealth, and some of the funniest trading jokes are about this.

A classic joke in this section is the robbery. As two traders were walking down Wall Street after a long day, a robber jumps in front of them with a gun, demanding all their money and possessions. One trader turns to the other and pulls out a hundred-dollar bill from his pocket, handing it over to the other trader. “You remember that $100 I owe you, here it is.”

There are several other jokes to this effect including:

Once a trader bought a brand new Porsche and drove it to work where he parked it right at the front door of the office to show it off. As he was climbing out, a truck lost control and rammed into the side of the Porsche on the driver’s side. The trader quickly called the police to report the accident, and when the policemen arrived, the trader immediately started ranting about his loss. He lamented about the damage to his brand new sports car and how much it cost him, not even giving the policemen time to ask questions.

After he was done ranting, the policemen looked at each other and shook their heads. Finally, one of them finally said, “How are you traders so materialistic you won’t even notice anything besides your possessions. You haven’t even noticed that your arm has been torn off from the accident.” The trader finally looked down his shoulder to notice he had indeed lost his arm, then asked in bewilderment, “Where is my Rolex watch?”

An unscrupulous broker was in court once after being caught in an elaborate scheme to defraud people out of their money.

The judge: How many people did you cheat with your scheme?

The judge: You do realize that we have the proof of your activities, and you will be charged with perjury if you lie?

The broker: I do

The judge: Do you know the penalty for perjury?

The broker: Yes, I do, as a matter of fact. And I also know that it is a lot less than the one I’d face if I told the truth

Once, a priest went to the barber for a haircut. After he was done, the priest reached for his pocket to pay but the barber refused, “No need, you do God’s work.” The next morning, the barber found several bibles left at the door of his shop.

That day, a policeman came in looking for a haircut, and after the job was done, the barber again declined to take payment. “You protect the public, including myself”. The next morning, the barber found several doughnuts left at the door of his shop.

That day, a stockbroker came in for a haircut. After the barber was done, he again declined payment from the stockbroker, “You also serve the public by protecting the investment system”. The following morning, the barber found a number of stockbrokers waiting at the door for a free haircut.

The pollster: Excuse me sir, I’m conducting a random poll and would like to ask some questions, do you mind?

The trader: Not at all

The pollster: Okay, what would you say is your average income?

The pollster: I was actually asking about monthly incomes

The trader: Really, and here I thought you wanted to know about daily income

Question: How do you become a successful banker?

A trader orders one pizza at a pizzeria, and the waiter asks how he would like the pizza to be divided.

Waiter: Sir, would you like that cut into 4 or 6 pieces?

Trader: You know what, I’m feeling quite hungry today. You had better cut it into 6 pieces

If you have watched any movies based on Wall Street including some titles like Margin Call, Wolf of Wall Street and The Big Short, they all portray traders as arrogant individuals. This can be confirmed by reading comments in trading forums, where you will find some very arrogant traders, although it doesn’t mean all of them are. Nevertheless, this small proportion of arrogant traders have spurred the advent of some of the funniest trading jokes. Some we really like include:

The trader in a hot air balloon

The man in the hot air balloon remarked, “You must be a broker, aren’t you?” The man on the ground replied, “Yes! How did you know?” The reply came, “Everything you just told me was probably true, but it isn’t really helpful in my situation. So, you haven’t been much help and I am still lost”.

The broker remarked, “You must be a trader, aren’t you?”. And the man in the balloon was surprised, “Yes, how did you know?” To which the broker replied, “You are lost – don’t know where you are or where to go. You made a promise you could not keep by agreeing to the meeting. Right now, you are in your predicament by being full of hot air, but you expect me to help you out of the jam you’ve found yourself in. I may not have been of much help, but you have somehow turned your problem around to somehow become my fault.”

Two brokers and the wolf

Once, two traders were walking in the forest for fun when they ran into a hungry and dangerous-looking wolf. On instinct, one of the traders took off his walking shoes and changed into running shoes. The other trader, bewildered, asked, “You really think you’re going to outrun a wolf just by changing your shoes?” To which the other trader replied, “I may not outrun the wolf, but I will certainly outrun you.”

Despite there being numerous 24-hour finance TV news channels, websites and even newspapers, the public still don’t completely understand the markets. The truth is that the financial world is complicated with numerous financial instruments and a wide variety of ways to trade. There is even a school of thought that even the traders themselves don’t fully understand the markets, and the funniest trading jokes are perhaps around this view. For example:

What do you get from a cross between a librarian and a stock market analyst? All the information you need but you won’t understand a word of it.

An economist is an expert who will know tomorrow why he thinks what he predicted yesterday did not happen today.

The markets can be bad, but I still sleep like a baby. Every hour I wake up and cry.

Markets are crazy because it’s the only place where every moment someone is buying a asset while another is simultaneously selling the same asset. Yet they both think that they will make money.

A surgeon, an architect and an economist are in a bar when an argument erupts about which profession is the most important. The surgeon argues, “A surgeon’s job is the most important because among the first things God did was to surgically remove one rib from Adam’s ribcage to create Eve.” The architect retorted, “Well, before that, God created everything in 7 days out of chaos, so it’s obvious God is an architect.” Smiling, the economist calmly remarked, “And who do you think made the chaos?”

Question: What’s the difference between an old man confused by a complicated calculation and an economist?

Answer: The economist is the one with the calculator

A study of markets often reveals that the perfect time to buy an asset was yesterday.

Click here to cancel reply.
Haridasan K N
Elliottic Fall Mr Trader got a steep fall from the top of a tree. “Yes a fast retracement” acknowledged Mr.Trader “..that pull back B was not visible in my time frame”
Reply
banner