EU and Japan agree on a trade deal 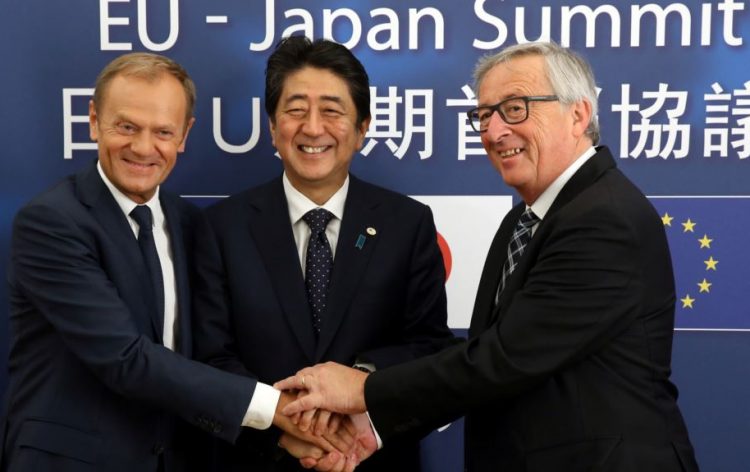 Many analysts are starting to feat that the ongoing trade war between the United States and China will damage the global economy. IMF recently reported that the global economy would be down 0.5% by 2020 if all the threatened tariffs were to be actually put in practice. As unsettling as this might be, there seems to be no light at the end of the tunnel for the two of the biggest economies. The US is increasing the number of products it plans to put tariffs on, while China is retaliating with counter-measures. A positive news comes from somewhere else altogether. The European Union and Japan have agreed to the terms of a free trade deal. The European Parliament still has to ratify the deal, but the leaders of the territories are optimistic about the future opportunities. As a result of the trade deal, almost all trade between Japan and EU will be liberalized.

“The Economic Partnership Agreement” will cover 600 million people and the third of the world GDP.

If the deal goes through, it will be the largest of its kind for the European Union. The significance of such an agreement is especially big considering the protectionist approach the United States has been taken when it comes to trade. It could also prove to be what the global economy needs at the moment. A joint statement by the Prime Minister of Japan Shinzo Abe and the President of the European Commission Jean Claude Juncker emphasized this point with a comment: “ sends a clear signal to the world that the EU and Japan are committed to keeping the world economy working on the basis of free, open and fair markets with clear and transparent rules fully respecting and enhancing our values, fighting the temptation of protectionism”.

“The Economic Partnership Agreement” will eliminate the majority of tariffs that will free up over 1 billion euros annually. It will cover about 600 million people and will encompass almost a third of the global GDP. According to the International Monetary Fund, Japan is the third largest economy, behind only US and China and has a nominal GDP of $4.8 trillion. The European Union as a whole has a nominal GDP of over $17 trillion, with Germany accounting for its largest chunk. The trade between the countries is significant as well. Its total volume is over 86 billion euros. Japan is the seventh biggest export market for EU. Some of the most popular products exported by EU to Japan are dairy goods, while the biggest share of imports from the country belongs to cars. 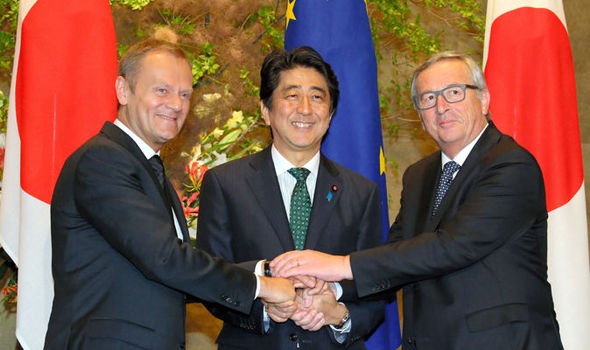 Politicians see the deal as a move of defiance towards the protectionism.

The general feeling among people involved in the political processes is that of optimism and defiance towards the recent protectionist sentiment being advocated by the leader of the United States. EU Trade Commissioner, Cecilia Malmström, commented about the deal: “The EU and Japan share a common vision for an open and rules-based world economy that guarantees the highest standards. We are sending a message to other countries about the importance of free and fair trade, and of shaping globalization”. “Together we are making, by signing this agreement, a statement about free and fair trade, we are showing that we are stronger and better off when we work together,” – said the President of the European Commission, Jean Claude Juncker. European Council President Donald Tusk put it more concisely, commenting: “We are sending a clear message that we stand together against protectionism”.