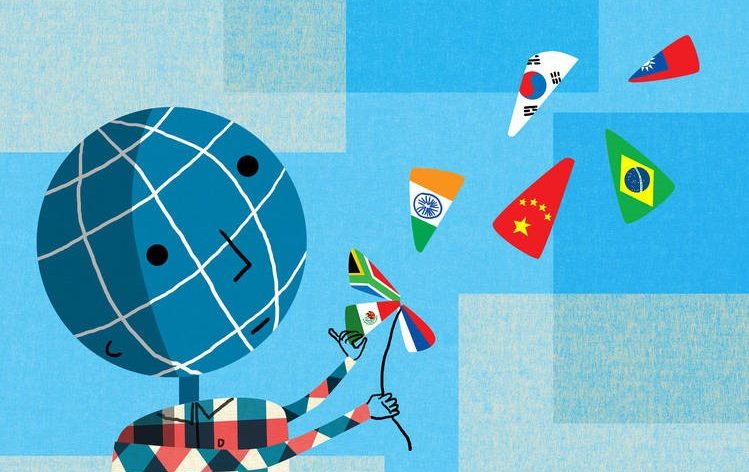 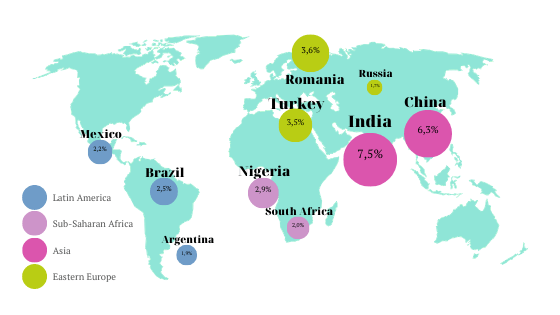 Economists believe that the difference between the economies of developed and developing countries is enormous. Among countries with economies that greatly rely on commodity exports — especially oil — growth will begin to accelerate this year and move on to the next one. However, in countries like the United States things are going to be different. Rising fuel prices and large external debt greatly impact countries that import fuel, especially if those experience macroeconomic imbalances. In general, this can lead to their financial instability, as well as to the depreciation of their local currency. Let’s see what awaits some of those countries in 2019.

Previous pear was quite favourable for India due to normalisation in cash conditions, the demonetisation of 2016, as well as recovery from the previous year’s Goods and Services Tax. However, there is still a long way until complete recovery from all economic hardships. Risks of fiscal slippage before 2019 Indian general elections, weakness of Indian banking sector, trading tensions on the global market, increased oil prices definitely do not make things easier. In 2018, growth percentage in India reached 7,3%. In 2019, the level is expected to get close to 7,5%.

The trade war between China and the United States is the main factor that can affect the country’s economic ‘health’. But apart from this, there are a number of problems within China itself that are likely to also contribute to the deterioration of their economic stability. Among these we cam point out the decline in the real estate market, as well as financial deleveraging. In 2018, the country’s economic growth reached a level of 6,5%, but in 2019, the percentage has already decreased to 6,3%.

Brazil’s economic forecast for upcoming year was largely influenced by 2018 trucks drivers’ strike, also known as the diesel crisis, as well as less supportive global attitude towards the country, and increased oil prices (which, btw, became the reason for that trucks’ strike). GDP in 2018 in Brazil was marked to be 1,7%. Meanwhile, it it expected for in to grow in 2019 up until 2,5%.

The pace of economic growth in Argentina is expected to slow down drastically after a very successful first quarter of 2018. And there are several reasons for that. Firstly, it is the loss of agricultural output caused by last-year drought. Secondly, it is the high interest rate and local currency volatility that influence on investment decisions from abroad, as well as within the country itself. Notably, the expected economic growth for 2019 is expected to reach 1,9%.

Russia is expecting an economic growth this year due to several factors such as strengthening of private consumption, balanced oil prices, improved labor market, as well as low inflation. All of that results in normalised household spending and higher commodity prices that are expected to support export growth. However, high political uncertainty and burden from already-existing sanctions remain the key risk factors for the future of economy in the country. GDP level reached 1,7% in 2018 and is expected to keep this position in 2019 as well.

Economic growth in Mexico this year might be caused by household spending and growth of exports. Advanced job markets and improved private-sector lending are two factors that will support private consumption. Meanwhile, factory output in the USA will stabilise manufacturing exports. In 2018, the growth rate was registered to be 2,2%, and in 2019, it is awaited to stay on the same level.

Higher inflation and consumers’ uncertainty and lack of confidence on the market were two things resulted in slowdown in consumer spending in 2018. Even though the expansion in fixed investment rate should stabilise the economy of the country, low EU funds absorption will limit its growth. The growth rate of the previous rate reached a level of 4,1%, while the expected growth rate in 2019 is already 3,6%.

Slow economic growth of Turkey can be mostly explained by unstable investor sentiment, higher prices for imported oil, and tighter financial conditions. Among other risks for the economy of the country we can name exchange rate volatility, geopolitical issues, increased inflation, as well as current account deficit. The growth rate in 2018 reached 4,2%, and experts are expecting it to fall to approximately 3,5% in 2019.

Seems like higher oil prices, stabilised liquidity, increased public spending (everything as a part of the run-up to the 2019 elections) should boost up the country’s economy. However, the future is not that bright for Nigeria. Political uncertainty and security concerns are the main drivers of slow economic growth. In 2018, GDP reached the point of 2,4%. And in 2019, it is actually still expected to grow up until 2.9%.

There are several reasons why experts think that things are not that bad for South Africa. Firstly, greater political stability on the international arena and firm credit ratings can potentially become economy drivers that might ride our the weak first quarter of economy in South Africa. Moreover, real wage gains should become the booster for stronger household spending and the government’s incentives to attract investment can improve capital outlays. However, fiscal slippage and slow reform processes are likely to hold back the economic development of the country. In 2018, growth rate was evaluated to be 1,6%. Meanwhile, an expected growth rate in 2019 is 2,0%.