Recent actions of Fed to fight with the coronavirus crisis 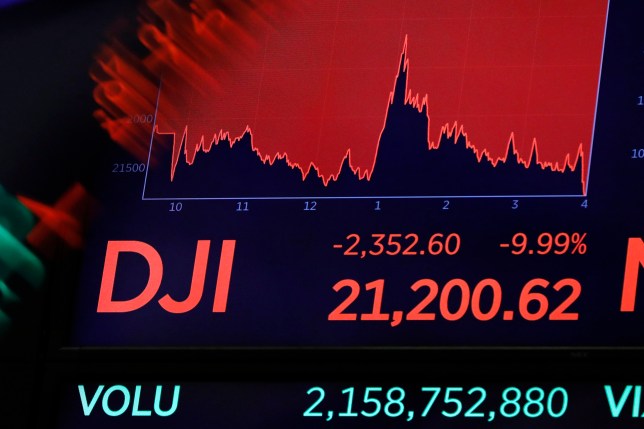 In the face of the serious coronavirus outbreak that seems to worsen each week (if not daily), there is not much the Federal Reserve can do to protect Americans from it. But it can at least protect them from the burden of a sudden slump in economic activity.

Thus, this Sunday, the central bank announced that it is planning to undertake several severe measures to support the US financial system. Those measures, namely, are a sudden cut in interest rates, a multibillion-dollar bond-buying spree, a discount on short-term funding for banks, and a coordinated move with other central banks. The last one is supposed to make it more affordable for these small banks to borrow US dollars worldwide.

All experts noticed that this is by far the greatest effort taken by the central bank to support the economy of the United States ever since the Great Recession. That can prove that the Fed is seriously disturbed by the recent outbreak and is worried about the consequences it might have. Thus, it is fair to say that the economic severity of the coronavirus outbreak is now on very much the same level as the global financial crisis in 2008.

For a while, seemed that it really might help. But here is what happened instead – US stocks lost their value drastically on Monday as the Dow also fell to its lowest level in nearly three years. Of course, there is no surprise that people started to fall into a panic thinking that central banks’ emergency measures over the weekend meant the economy is in much worse shape than previously believed. 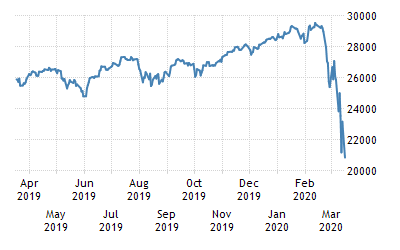 What is more, instead of soothing the economic conditions of the country, the emergency interest rate cut from the Fed had a completely opposite effect. The S&P 500 (SPX) was noticed falling more than 7% and trading was halted for 15 minutes.

Later, mid-morning continued falling and got to the point down 7.9%, off its earlier lows.

The Dow (INDU) was 8.3%, or 1,920 points, lower. The rate hasn’t been this low since May 2017. Also, the Nasdaq Composite (COMP) dropped 7.8%.
Markets got seriously damaged by the coronavirus outbreak – Australia’s benchmark index crashing nearly 10% in its worst day on record. In Europe, London’s FTSE 100 (UKX) fell 5.7%, while France’s CAC 40 (CAC40) plunged 7% and Germany’s DAX (DAX) dropped roughly 5.7%.
The European Securities and Markets Authority asked all short-sellers to provide more information about their activities, saying the pandemic “constitutes a serious threat to the orderly functioning and integrity of the financial markets.”
They have also mentioned:

“There is a clear risk that such downward trend will continue in the coming days and weeks.”

Going back a bit, let’s look at how each of the Fed’s crisis-era tools exactly works to potentially prop up the economy.

Remarkably, this Sunday, the Fed announced that it is planning to cut its key interest rate, the federal funds rate, to zero to 0.25%, down from a range of 1% to 1.25%. It is worth saying that the federal funds rate is the interest rate banks charge one another for overnight loans. And by its nature, that is these banks’ primary tool for influencing the economy. It can affect everything: mortgage rates, auto loans, the interest rate on savings accounts and credit cards and much more.

Low-interest rates usually stimulate the economy by making people eager to make big purchases and, therefore, borrowing money to do so. 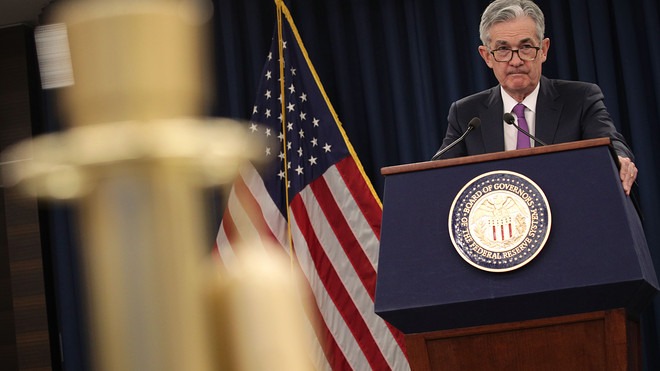 Notably, the last time the Fed decided to slash the federal funds rate nearly to zero was back in December 2008 and, we suppose, there is no need in explaining what exactly was happening then. After the Federal Reserve kept this interest rate for a whole of seven years, that, in turn, marked one of the slowest and longest economic recoveries on record.

As the Federal Reserve has also announced its decision to purchase hundreds of billions of dollars in bonds — specifically at least $500 billion in US Treasuries and at least $200 billion in mortgage-backed securities, it is worth discussing what that means. First, this is meant to keep financial markets functioning smoothly. But how does it do that?

The market for US Treasuries is one of the largest, but because of the recent outbreak, trading securities has gotten tougher. So, by purchasing billions of dollars in Treasuries, the Federal Reserve plans to create more demand for bonds and get cash into the hands of banks and other institutions that are trading these securities.

“These markets are part of the foundation of the global financial system… And if they are not functioning well, then that will spread to other markets. We know that dysfunctional financial markets… can have very big negative effects on the economy.”

In addition to above-mentioned, the Fed also announced a coordinated effort with five other central banks — the Bank of Canada, the Bank of England, the Bank of Japan, the European Central Bank and the Swiss National Bank — to make it financially easier for banks around the world to borrow US dollars. 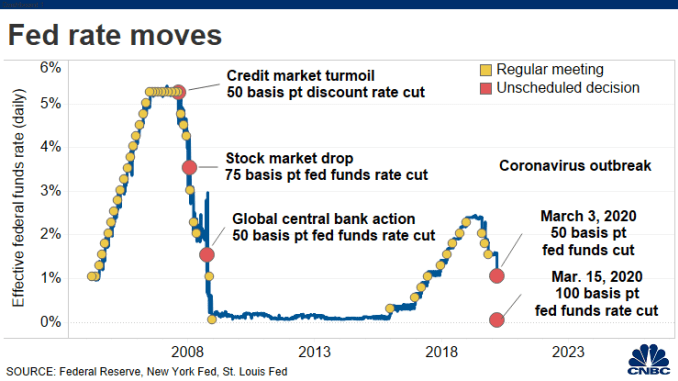 That decision is supported by what was happening during the financial crisis in 2007 when, as a result, banks around the world, they became reluctant to transact with each other. Thus, in December that year, the Fed created “dollar liquidity swaps”, which can be simply explained as credit lines to foreign central banks. This illustrates a certain way to keep dollars flowing in the global financial system.

This Sunday, notably, the Fed agreed to lower the rate on dollar swaps to 0.25%. This, in turn, was supposed to “ease strains in global funding markets, thereby helping to mitigate the effects of such strains on the supply of credit to households and businesses, both domestically and abroad.”

Banks, especially in times of crisis, are in need of short-term, back-up funding to keep their operations running smoothly. Therefore, they have an option to turn to the Fed’s so-called “discount window” and borrow those funds directly from the central bank.

On Sunday, the Fed made it cheaper for banks to borrow funds through that mechanism and extending the length of loans to up to 90 days.

“The discount window plays an important role in supporting liquidity and stability in the banking system, and we encourage banks to turn to the discount window to help meet demands for credit from households and businesses.”