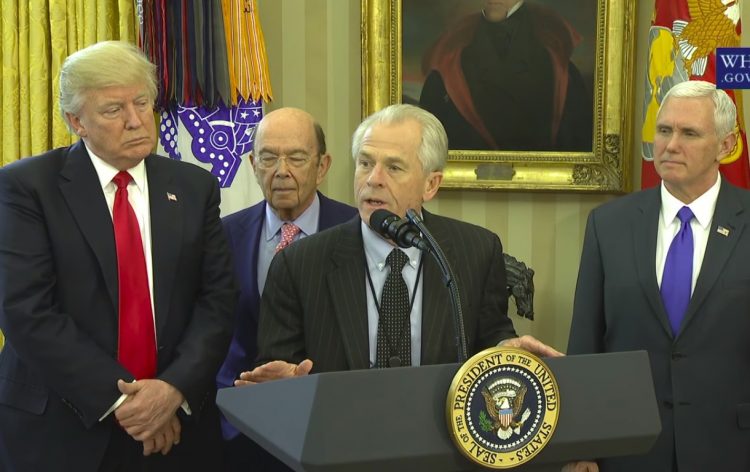 The world might be in a state of anxiety after last week’s yield curve inversion, but the White House is calm. The Us administration has denied that the markets and the population, in general, should be in any way scared of a coming recession, as they believe the inverted yield curve “technically didn’t happen” or that it is not a sign of the worst. While the entire world was panicking last week, trying to come up with ways to insure themselves and keep their capital whole for the coming recession, the US government was denying that yield curves were a sign of a recession. They choose to believe that the experience that the world has had since World War II, of a recession following a yield curve inversion, does not apply in this case.

The US trade adviser Peter Navarro says that the US bond market did not show any sign of a yield curve inversion at all last week. He believes that all that happened was a flat curve, which, according to him, is not a sign of anything. While those who would dispute his point to the fact that the 10-year yields fell to 1.623%, which is below the 2-year 1.624%, he still argues that this is not an inversion. According to Navarro, the spread between the two is too low to be calling it an inversion and is nothing but a flat curve, which is no sign that predicts anything specific. Although, the past inversions that took place before the 2008 crisis and other such financial crises, the spread was not much higher than this. Which is why it was enough for the markets to stop being so confident with their investments and caused the US markets to see the worst performance in a long time, falling by 3% on Wednesday last week, and some more on Friday.

But, it seems that the White House is not going to be taking it in any way seriously. On the contrary, Navarro likes to believe that the current bond market situation is actually a sign of good things to come. Specifically, he believes that the US economy, or the “Trump economy” as he referred to it, is extremely strong and attracting new investors into the bond market, which is causing the current situation with the yield curve and is a sign of positive things to come. how he came to this conclusion, is anybody’s guess.

The fact that the White House is so optimistic about the current situation of the US economy has allowed Trump to continue his trade war unimpeded. According to the President of the United States, he is not planning on alleviating the trade war with China in any way and is going to be continuing at the same pace as before. He believes that one of the key points that need to be solved before any motion is taken in terms of the current trade war is the alleviation of the Hong Kong situation. He asked, the week before, for a peaceful resolution of the current situation from the Chinese mainland government. While this might be a noble cause to delay any further trade talks, the current economic situation is not showing signs of the government being able to continue the trade war with the same confidence.

Yet, it seems that the advisers that the White House is staffed with are deciding to tell the president, and the people, that everything will be okay even if the trade war continues. It seems that the US is planning on pushing their own economy a far as possible in order to be able to give the Chinese economy a lot of trouble. The process involves lowering interest rates some more in the coming months, which is what the Fed has done already. Lowering the interest rates further might be dangerous to the US economy, as it would be taking away another tool from the Federal Reserve that would allow it to control the situation, more or less, in the case of a recession.

While the trade war continues and fears of a recession get more ingrained into the psyche of the markets, one more little detail keeps the trade war stoked. The Chinese company Huawei, which was accused of espionage for the Chinese government, has been banned from the US. While there are some easings that have been allowed for the company, it seems that the will still have a hard time making it back into the US. Donald Trump has stated that he will not be easily allowing the return of Huawei, as it poses a national risk. While the stance of the US is understandable, this is causing the Chinese government to consider further steps in order to stimulate the trade war.

Whatever seems like it would have spurred the two governments to try and end the trade war, it seems that the two are not, in any way motivated, to consider ending the trade war at the moment. The world is in danger of a recession, but it seems like there is yet to be an end to the current situation.