Is Monetary Unit (MUE) a good cryptocurrency to invest in? 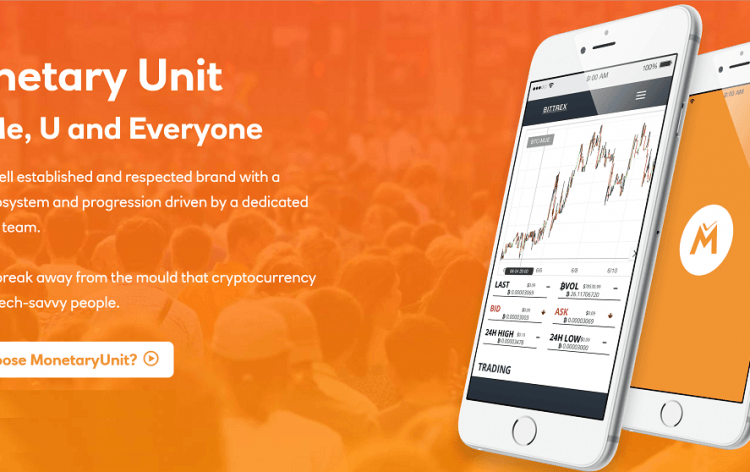 One of the early entrants in the cryptocurrency market was Monetary Unit altcoin. It was launched in mid-2014. The founders of the cryptocurrency present it as a decentralized, self-governed and self-sustainable project with long-term goals. The crypto whose ticker symbol is MUE is designed to be easily understandable to everyone. One doesn’t have to be tech-savvy to access or use this coin.

Unlike many of the major cryptocurrencies, MUE presents a unique business model where the community owns the management and voting rights. The coin is designed in line with the Master-Nodes-Model. The Master Nodes network helps in the management of pools of funds used to finance the project over the long term. The developers of the project set aside 10% of all newly created MUE coins for reinvestment purposes. This serves to make the project self-sustainable. 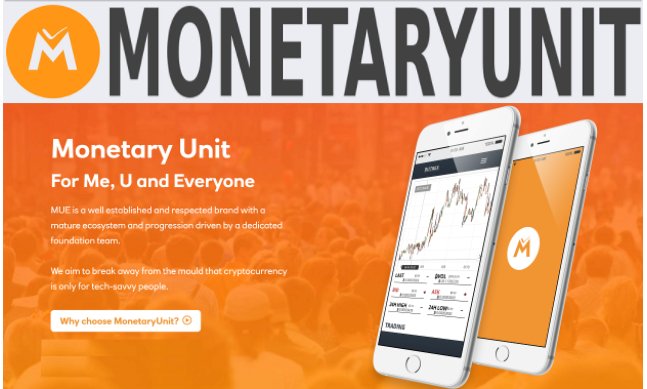 How does Monetary Unit cryptocurrency work?

Monetary Unit users are free to send money to each other using the InstantSend feature. The payments over this network are done instantaneously. This altcoin can be used to buy everyday goods and services. There are several projects on the MUE platform which are designed enable people to use the coin in their everyday lives. There is the muegs.com project, for example, where gaming enthusiasts can enjoy their favorite games. There is the GS Points project where users of the coin get to earn ‘Go Shopping’ reward points whenever they spend MUE coins on the MUE ecosystem.

There are discounts awarded to everyone who purchases goods and services using MUE coins. When a person buys using the MUEX website, they get to access services and apps within MUEX which allows them to enjoy big bonuses and discounts. On the MUE network, Ripple and a majority of cryptocurrencies are accepted even though the aim is to bring more people into MUE.

Features of the altcoin

Like Bitcoin and many other cryptocurrencies, Monetary Unit coin is minable. However, mining does not require that one invests in complex and expensive power-consuming computers. Moreover, the developers migrated the crypto to Dash codebase. This codebase includes both the X11 mining also & and the use MasterNodes. The use of X11 allows MUE to reach a larger market of miners. Improved security and increased overall hash rate can be experienced with the new mining technique.

The MUE team has considered the effects of inflation on the crypto. They have estimated that inflation will be about 3% MUE per year. This will help promote the use and the distribution of the altcoin. They estimate that the inflation will happen at 40 MUE every 40 seconds from the day the project was launched and this will continue for the next 130 years. The other feature is that urgent transactions can be paid for instantaneously and it will be received and confirmed by the receiver using the InstantSend function.

How does it perform?

Since its launch, Monetary Unit cryptocurrency has been a low performer, at least until early 2017. Like it was the case with the most altcoins which follow Bitcoin’s lead, MUE started performing well in 2017. On December 26th, 2017, MUE touched an all-time high of $0.58. The coin managed to stay above $0.5 until January 9 when the price started falling. As of March 14th, the closing price was $0.11 while the market cap was $14 million. 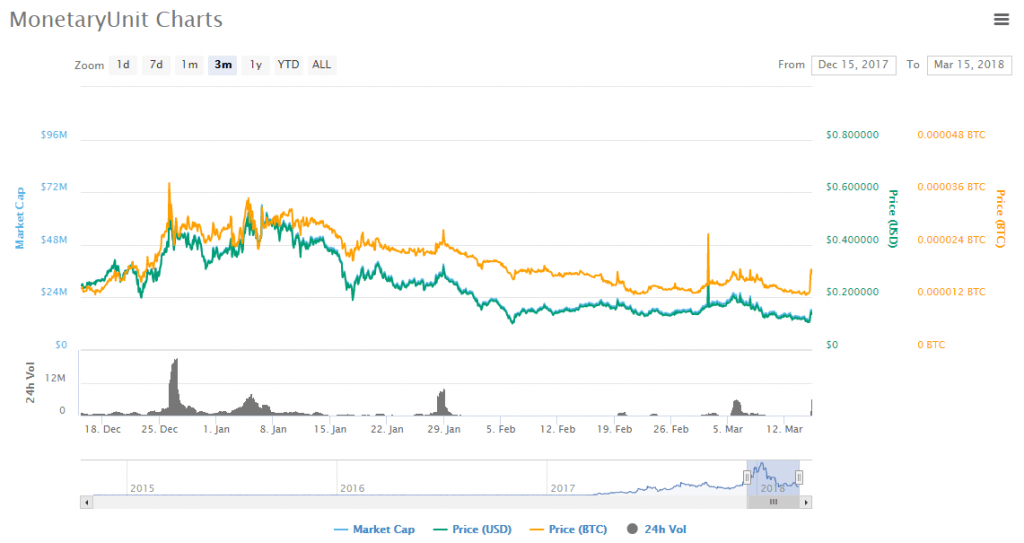 On the morning of Thursday, MUE was ranked number 2 on the list of the cryptos with the most traded volumes. At the time, more than $5.2 million had been traded in the past 24 hours. The price on Thursday morning was $0.139 which was a growth of about 16% from Wednesday’s price.

When put in comparison with cryptos such as Ethereum, MUE is a small player in the crypto market. The fact that it was launched in 2014 and it is still struggling to attract miners and users is not a very good sign too. However, the crypto is bound to enjoy some substantial user and price growth once projects such as ‘webwallets, coinbuy, cashchat and GS Points’ are completed.