Update on national debt worldwide in 2019 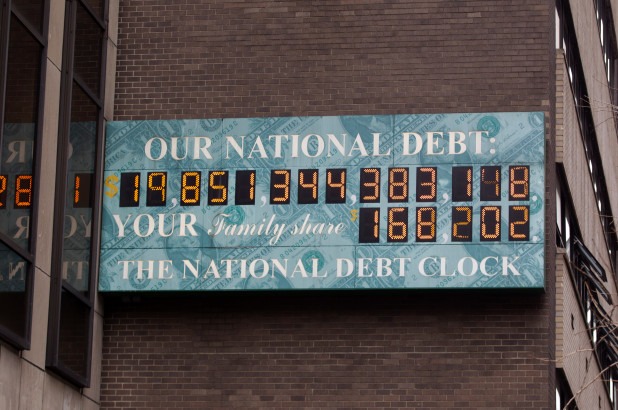 The national debt, sovereign debt, country or government debt – these are all names for the difference between government spending and earnings.

Each year the government adds the budget deficit to its debt if it spent more money than it received from tax revenue.

Being the largest world economy might have its downsides too. And the United States is a great example of that. The level of the USA’s national debt has reached a level of $19,23 trillion, and this number keeps growing with years. That is why about 6% of the country’s budget is allocated for repaying the interest payments on its debt.

It is worthy to admit that Japan’s national debt is less than half of the US national debt. However, if you would look at the proportion between this number and the country’s GDP, you would realize that it is actually harder for Japan to repay its debt than for the USA. Notably, in order to somehow balance-out a current situation, Japanese central banks are now resorting back to negative interest rates hoping that it will stimulate their economy.

The national debt of Italy is currently $2,48 trillion and that solely can be the major cause for high unemployment level and slow economic growth in the country.

Spain’s national debt has reached a level of $1,24 trillion. Notably, its public debt per capita is currently $35,466. And many specialists believe that Spain’s debt clock was already started and it’s just a matter of time until the economy will collapse.

Even though Belgium is a seat of the wealthy Eurozone where all new policies are taking their roots from. However, that does not insure it from being in a pretty complicated economic situation. The country’s national debt-to-GDP ratio has been around the same level of 105% since early 2013.

Even though its national debt seems to be smaller than others’, we should keep in mind that this is a much smaller and less economically developed country. Thus it will be way harder for it to pay out the debt and get back to a normal economic condition. The fact that international creditors have bailed out the country numerous times since its crisis in 2010, definitely does not make it easier for Greece to recuperate from its hardships.

Even though Portugal managed to get back to normal after its financial crisis in 2010, its national debt still exceeds its GDP, indicating that the nation’s financial struggles are not yet over.

Even though Singapore is considered to be one of the reachest and financially stable countries, its debt-to-GDP ratio is still pretty high. Relatively recently, its economic growth rate fell to 0.6%, which was the lowest point over the past decade (even lower than during the 2008 crisis).

One of the primary sources of economic issues in Cyprus is its close proximity to Greece. In the first quarter of 2014, the country received an international bailout of €10 billion ($11.4 billion USD). Since then, its national debt-to-GDP ratio has been slowly but constantly rising.

This small Asian country with small economy and ties to India is the last country on our list. The economy of the country is highly dependable on Indian financial assistance and the availability of foreign workers to support its infrastructure.

What are the solutions?

The way to eliminate, or at least decrease, a national debt level is to cut spendings or raise taxes. Those are classic tools of contractionary discal policy.

But there some pitfalls in implementing both of those strategies. As if the government would cut its spendings too much, it would result in a slow down of economic growth. Because government spendings are part of GDP.

Meanwhile, a significant tax increase can also slow the economic growth of the country. As big corporations cam simply leave the country and go somewhere else, where the tax system will be a little more ‘business-friendly’.