Biggest altcoin and bitcoin failures of all time 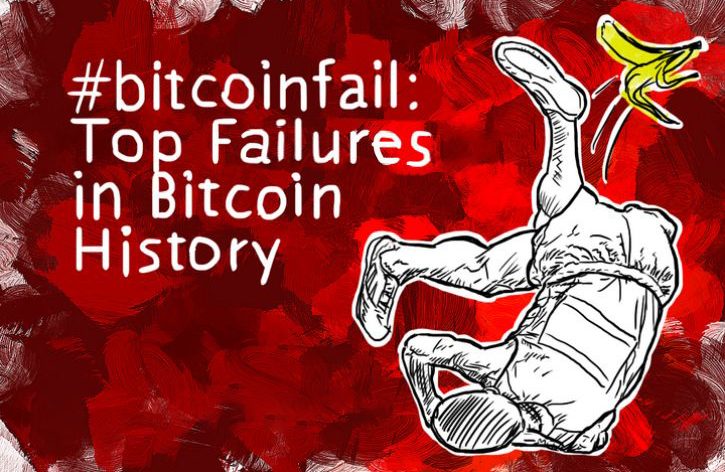 Despite the growing popularity of cryptocurrencies since bitcoin’s inception in 2009, it has not been smooth sailing all along. There have been several bitcoin failures, as well as other altcoins, along the way that have hampered people’s trust in virtual currency. To be fair, let’s look at some of the mishaps that have been experienced rather than focus only on the good.

The biggest bitcoin failures in terms of lost revenue have been due to hacks and mismanagement at the exchanges. Since blockchain itself is secure from tampering, malicious people have chosen to attack the institutions that deal with cryptocurrency. Other failures were just scams designed to swindle people. Although the scammers didn’t always get away with a lot, such activities can still be counted as failures to the virtual currencies.

There are very many such failures to list in just one post, but we’re going to highlight the most prominent ones.

Failures from the bitcoin exchanges are rare because the exchange companies have a reputation and qualified staff, but they have happened. Some of the biggest altcoin failures have even occurred despite all the knowledge by company workers, and these include:

This is one of the most famous bitcoin failures of all time, and it has to be at the top. Mt. Gox was a Tokyo-based bitcoin exchange that ran from 2010 to 2014. At its height, the company was handling about 70% of all bitcoin transactions in the world. In 2014, the company filed for bankruptcy because it had lost customers’ bitcoins and did not want to face legal action. The total number of bitcoins lost at the time were 850,000 with a value of around $473 million – these were about 7% of all bitcoins in the world.

The amazing thing about the Mt. Gox incident was not just the number of lost bitcoin, but by the extent of negligence by the company. Investigations into the company showed that it had been losing bitcoins since 2011 in minor failures. In fact, it was not a single hack that led to the loss of the bitcoin, but small amounts being stolen by hackers since 2011. It is not possible to know whether Mt. Gox knew of this, but the company did not have as many bitcoins by 2013 as it thought it had. It was only the mass panic and withdrawals by clients in 2014 that made people aware of the fact. The result was a massive drop in bitcoin prices from more than $1,000 to under $500 per bitcoin, almost similar to this year’s bitcoin crash.

A few weeks after the bankruptcy filing, Mt. Gox said they had found some 200,000 bitcoins, bringing the total number of lost bitcoin to 650,000. In 2016, Kraken, another bitcoin exchange, said it would refund $91 million worth of bitcoins to those who lost bitcoin in the Mt. Gox incident. This may not cover all the losses, but it provides hope to some of the victims.

Standing for Decentralized Autonomous Organization, this was a kind of mutual fund touted as revolutionary at the time. Investors would buy DAO tokens with bitcoin or ether, and vote for projects using the tokens. Profits from the approved projects would then be distributed to the investors in terms of tokens and subsequently bitcoin.

Pundits described the idea as revolutionary and it was launched on the 30th of April 2016 and by the 21st of May had managed to raise $150 million. Such a huge amount raised only through crowdfunding was astonishing, and the DAO project was seen to be promising. Then came the fall that would make the DAO token one of the biggest altcoin failures.

On the 18th of June, hackers found a vulnerability in the smart contract that allocated funds to projects. Basically, the hacker(s) approved a project of $50 million and made off with the money, which was a third of the entire fund. Despite efforts by Ethereum, they haven’t been able to recover the money, but the dwindling value of DAO tokens leave the hacker with only about $8.5 million compared to the $50 million he stole.

Upon the news of the hack, investors quickly withdrew their tokens, and the value of the DAO token quickly dropped to the floor. To date, DAO tokens are still available at most bitcoin exchanges, but very few purchase them. Ethereum’s approach to bitcoin is very wild, as you can see from its profile on bitcoin startups to watch this year, and the DAO incident has made the company one of the largest bitcoin failures to date.

This was among the first bitcoin wallets launched around the time when bitcoin was just starting to be popular. After purchasing bitcoins, you keep them in a digital wallet, in this case, MyBitcoin. On August 2011, the operator of MyBitcoin released a statement saying that the company had noticed they had lost 51% of the bitcoins on their servers. This was about 79,000 bitcoins with a current market value of over $72 million.

To date, no one knows for sure whether the lost bitcoins at MyBitcoin were the result of hackers as the employees at the company say or their own actions. Regardless, it is still one of the biggest altcoin failures given the number of bitcoins lost and the time it occurred. Bitcoin was not as popular back then, so a loss of 79,000 bitcoins represented a large chunk of all bitcoins in existence back in 2011.

Failures due to scammers

Scammers have generated some of the most famous altcoin failures, but there are just so many such scams going on every day. However, let’s just focus on the most prominent ones that attracted the highest number of investors:

This is another interesting story, but this one is just a straight-up scam with very little sophistication. It begins with GAW Miners which was started in 2014 as a cloud-mining venture. To create bitcoins, individuals must ‘mine’ the coins, but it takes a lot of computing power to do so. Instead, cloud mining involves investing in a mining company to do the mining on behalf of the investors.

The problem was that GAW Miners did not have anything at all and was just a Ponzi scheme. Initial investors were paid with the new investors’ money, and the cycle went on until there were over 10,000 investors. At this point, GAW Miners was running out of funds to pay the investors and they needed a new source of money to keep the scheme going.

The CEO of GAW Miners, Josh Garza, then came up with the idea of Paycoin which was marketed as a revolutionary cryptocurrency. Instead, it was just another generic altcoin like all the other 700 plus in the world, nothing remarkable. Nevertheless, Paycoin was marketed brilliantly and many investors were pulled in, especially those unfamiliar with such altcoin scams.

The hook was that Paycoin would soon reach $20 per, which was higher than the offered price at the time. After investors waited and waited, Paycoin never delivered its promise, and they quickly gave up. Paycoin simply closed up shop and Garza fled the US. He has since been caught and charged with securities fraud, but the investor’s funds have not been recovered.

Of all the bitcoin scams, the story of BST is simple and effective. Trendon Shavers started the company as an investment opportunity for investors. His idea was to use market arbitrage strategies where he would sell investors’ bitcoins to some buyers at an inflated price and buy more bitcoins at market price. This would generate weekly returns of 7%, 3,641% annually.

The operation started in 2011 and went on into 2012, during which time Shavers managed to acquire 764,000 bitcoins. At that time, 2012, these bitcoins were worth $4.5 million which is equal to $700 million at the current price. Shavers did not actually invest the money in any way, but it was a Ponzi scheme with old investors being paid with the new investors’ funds.

Shavers was later arrested in 2014 and fined more than $40 million, and after pleading guilty, received 18 months’ imprisonment. This was the first case in the US involving cryptocurrency but it was certainly not the last because much more have followed since then.

Dogecoin was first launched as a light-hearted cryptocurrency which could be used as a form of donation online and also just for fun. To this effect, the value of dogecoin was very small, and you could get up to 100 dogecoin with just 2 cents, or even for free. Ryan Kennedy, though, who went under the name Alex Green and the username Moolah saw a chance to make money.

He created Moolah as an exchange where users could swap dogecoin for another altcoin, bitcoin and even real money. Then he pitched the idea to the creators of dogecoin who supplied him with plenty of dogecoin to start the business. Kennedy also approached companies like MintPal for investments, and they too invested in Moolah.

When these investors realized Kennedy was a scammer, he disappeared with their investment. The amount is estimated between $2 to $4 million. This makes the incidents among the largest altcoin failures to date. Dogecoin still survives, but the failure was a huge blow.