A look at Gnosis (GNO) cryptocurrency; is it overvalued? 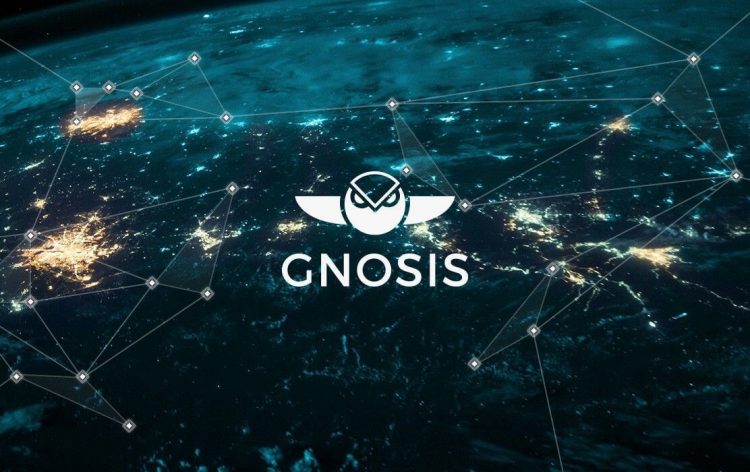 A big majority of cryptocurrencies go to initial coin offering priced less than a dollar. Very few cryptocurrencies whose token price was more than $10 have managed to stay above that price. Look at Polybius for example, the ICO was done in June 2017 and the token price was $10 but as at April 17th, its price was $4. There is BOScoin which was priced at $4 during the ICO. On April 16th, it closed at $0.17. But then there is Gnosis which was priced at $30 and its price has never gone below the ICO value.

Gnosis crypto which is Ethereum-based is designed to enable a person forecast in the virtual markets using ‘crowdsourced wisdom’. It provides you with information on uncertain events which comes in handy when trading in virtual currencies. Gnosis team has developed a number of programs which enable its users with the information they need. Among the programs one can access on the Gnosis platform include Financial Markets, Insurance, Futarchy, The Hunch Game and Price Discovery. 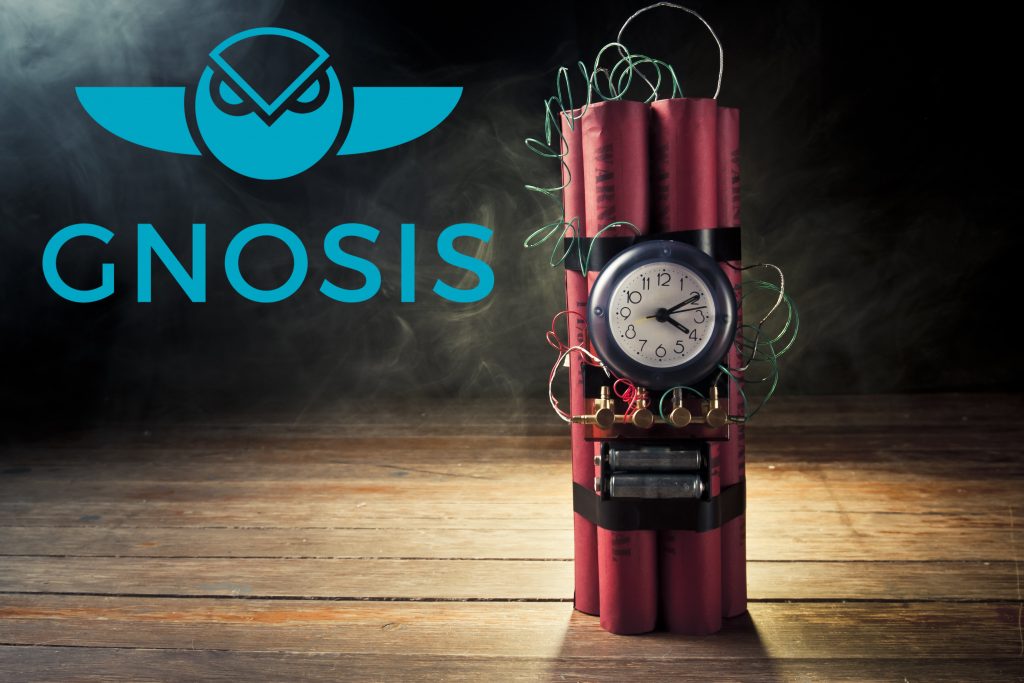 How does Gnosis work?

Gnosis is tailored to help users explore and profit when they participate in prediction markets. A prediction market utilizes user-predictions to aggregate all information about future events. In this market, users trade tokens that represent the outcome of a certain future event. Naturally, some outcomes are more likely to occur than others, the different tokens end up attracting different prices in an open market.

Over time, the related events start unfolding. Some token outcomes may have a higher likelihood of becoming true and hence their value will increase. Once an event occurs, the tokens representing the final outcome will receive full value while the other tokens’ value is zero.

The team behind the Gnosis cryptocurrency

The leading persons in the Gnosis camp are Stefan George and Martin Koppelmann. Sitting on the board is Joseph Lubin who is a co-founder of Ethereum and is also the founder of ConsenSys. The acclaimed Vitalik Buterin, the man behind the success of Ethereum, is also said to offer his assistance to Gnosis. The goal of the Gnosis team is to ensure that virtual forecasting markets are efficient and information channels are completely open to anyone who is interested. They aim to achieve their goal through targeted user-specific applications.

The Gnosis ICO and tokens

The ICO process was done and completed on 24th April 2017. It was reported that the whole ICO procedure which saw the company raise more than $12 million from the general public was completed in just 5 minutes. While there are quite a number of positive things one can say about Gnosis, there is a myriad of questions about the firm especially concerning its ICO. During the ICO, $300 million was raised but $280 million came from the owners and developers of the company. It means that 96% of the company is centrally owned. Only 5% ($12 million) was sold to the public. At the time, there was speculation that around 80% of the $12 million was acquired by around 20 people. The company said that 85% the capital raised would be locked for one year in order to help it achieve its objectives. 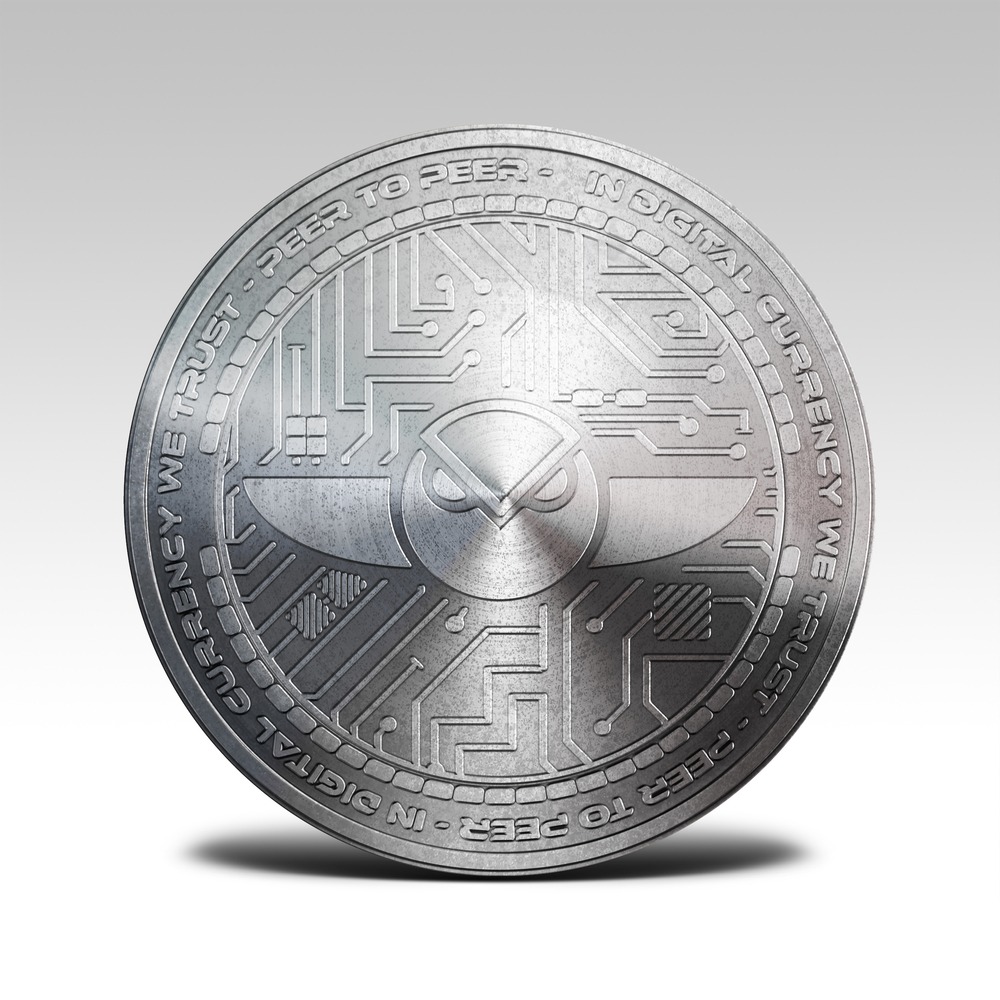 Unlike a majority of cryptos launched in 2017, Gnosis has two types of tokens; the GNO which you see being traded on exchanges and which are of ERC20 standard and then there are the OWL tokens. You will receive the latter type of tokens when you stake Gnosis.

How has the company been performing?

Gnosis cryptocurrency can be said to be unique in that when it started being traded its value surged by more than $280 in late May 2017. This was long before cryptos such as Bitcoin had gained real momentum. Still, GNO token enjoyed the late 2017 rally when it eventually reached an all-time high of $461 on January 5th. Just like a majority of cryptos in the market, GNO imitates BTC. On February 6th when the price of BTC touched a low of $6,000, GNO dropped to attract a price of $95 down from a high of $143 the previous day.

In the weeks leading to April, GNO was dropping steadily. On March 30th, the token touched $52 before starting a consistent rise which led it to reach an April-high of $114 on 21st, Saturday. The market cap of the crypto in the early hours of Saturday stood at $121 million while volumes traded were in excess of $1.4 million. 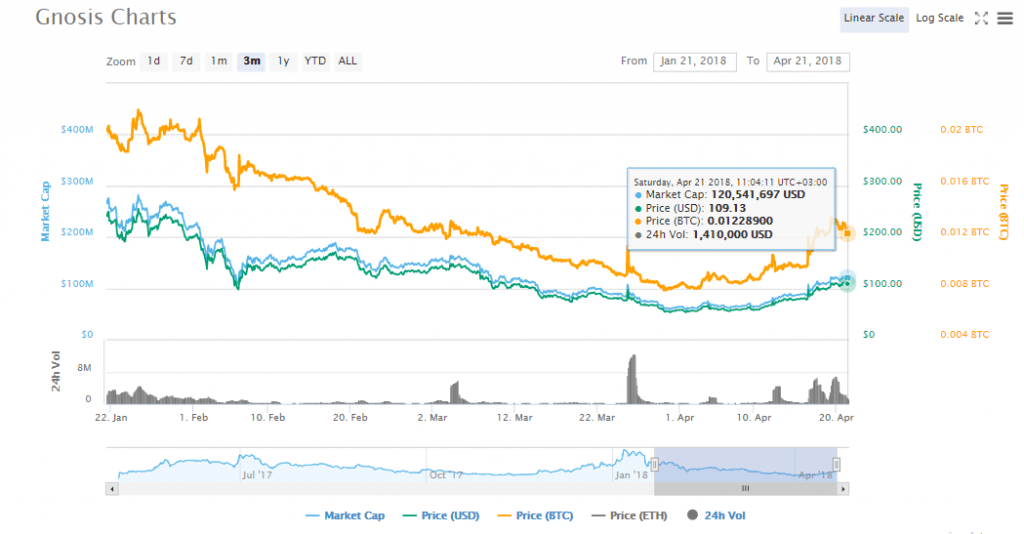 Should you invest in Gnosis?

Gnosis has created a unique infrastructure for prediction market apps and is continually improving it. The Gnosis Company has recently been working on an exchange project called DutchX. The exchange will be decentralized and is to be launched in Q2 of 2018. You can only trade ERC20 tokens on this exchange. Users should, therefore, own WETH wallet (Wrapped ETH) in order to trade ETH and other ERC20 tokens.

Even though the token distribution was lopsided, the Gnosis team seems focused to achieve its goals. Machine learning and crowdsourcing are some interesting forecasting models that Gnosis has decided to pursue. It is these innovative ideas, robust developer tools and vibrancy in the crypto market that seem to be making Gnosis succeed or stay relevant.